Affordable Energy News for Tuesday, May 16 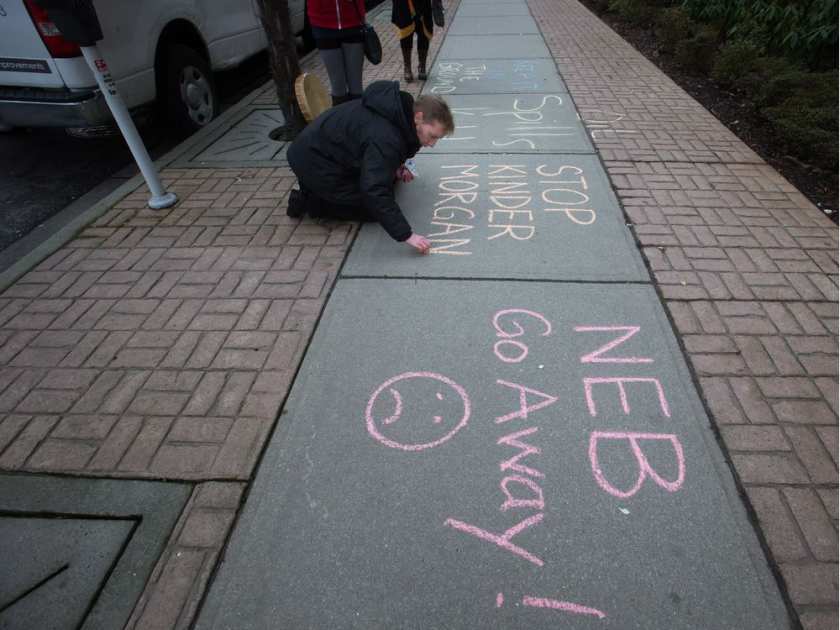 Proposed National Energy Board reforms will be a red-tape nightmare

A panel of experts charged with amending the National Energy Board has recommended sweeping changes to the way major pipelines are approved in Canada, including getting the federal cabinet to determine if a project is in the national interest before regulators follow up with a more technical review. At the same time, the panel wants to expand the role of indigenous communities, move some leadership jobs to Ottawa from Calgary and establish an independent energy information agency. But the recommendations are also a red-tape maker’s dream. The reforms are so vast and propose to fix so many unresolved issues they would make an already-onerous regulatory process even more daunting. – National Post

A panel advising the government on how to overhaul the National Energy Board says Canada’s current system for reviewing and regulating energy projects is broken and facing a crisis of confidence in the eyes of the public. The five-member panel, appointed by Natural Resources Minister Jim Carr, delivered a 100-page report Monday that calls for a full-blown rethink of how the system works, including the dismantling of the National Energy Board into two separate agencies, along with a comprehensive and coherent national energy policy to guide them. – The Chronicle Herald

A five-member panel appointed last December to recommend changes to the NEB delivered its report Monday. Among its suggestions is that the board be split into two entities — the Canadian Energy Transmission Commission and the Canadian Energy Information Agency. The information agency would serve as a repository for all information relating to energy development. The biggest change would put the federal cabinet first up to bat, charged with determining — within one year — if a proposed project is in the national interest. A project receiving the green light would then move to the licensing phase, which would be jointly managed by the proposed commission and the existing Canadian Environmental Assessment Agency over two years. – Calgary Herald

The Globe and Mail

With the continuing uncertainty about the British Columbia election results, speculation has arisen about whether Alberta Premier Rachel Notley or Prime Minister Justin Trudeau will be the biggest loser if the Trans Mountain pipeline is halted. Of course, the situation has changed since the initial approval of the pipeline. The Keystone XL pipeline through the United States to the Gulf of Mexico has now been approved by U.S. President Donald Trump. Keystone wasn’t an option when Trans Mountain got the go-ahead from the federal government in November. Now it is. And that may make all the difference for Notley and Trudeau. – Toronto Star

TransCanada looking at whether US producers still interested in Keystone XL

TransCanada is reassessing whether oil producers in North Dakota and Montana are still interested in shipping crude through its long-delayed Keystone XL pipeline now that they have other new options to ship their product, including the Dakota Access pipeline. – CBC News Calgary

Would PM go 'nuclear' to build a pipeline?

In the popular vote, there is no standoff between the pipeline-friendly Liberals and the New Democrats and Greens who sit on the other side of the divide. Last Tuesday, 60 per cent of B.C. voters supported parties that oppose the current plan to bring more bitumen oil to the Pacific coast via an expanded Trans Mountain pipeline. Prime Minister Justin Trudeau gave the project his blessing last fall. Now, when it comes to making a case for it in B.C., he is essentially on his own. Some pro-pipeline advocates are urging the prime minister to use the declaratory power vested in the federal government to override any obstruction to Canada’s goal of getting more bitumen oil to tidewater via pipelines. – The Chronicle Herald

Zap it. Neither Ontario’s Progressive Conservatives or New Democrats will support the Liberal government’s hydro rate plan. Both opposition parties signalled Monday they won’t vote for the legislation which would cut hydro rates by 25%. To achieve the rate reduction, the government will add billions in debt over the next decade. – Toronto Sun

NDP says “no” to Liberal’s hydro plan, and will vote against legislation

Ontario NDP Leader Andrea Horwath says her party will vote against the Liberal government's plan to lower hydro bills, calling it a ploy to buy votes for the next provincial election. Under legislation tabled last week, Ontarians will see lowered hydro bills for the next 10 years before paying higher costs for the following 20 years. Horwath says ratepayers can't afford the plan. She cited a Liberal cabinet document leaked to the Progressive Conservatives last week, which contains a projection that electricity bills will drop this year, rise slightly for four years while increases are limited to the rate of inflation, and then rise quickly after that. – CBC News Toronto

A document — leaked last week — says that between 2022 and 2027, Ontario residents will be hit by a 6.5% jump in power rates annually each year, followed by a whopping 10.5% increase in 2028. NDP leader Andrea Horwath said the plan is nothing but an election ploy. “The cabinet leak makes it clear this is a $40-billion attempt to buy an election,” she said. Progressive Conservative leader Patrick Brown also said his party wouldn’t support the government plan. He called it an “election gimmick” that doesn’t address the root cause that drives hydro rates skyward. – 24 Hours Toronto

Huron Bruce MPP Lisa Thompson wants to see the Debt Retirement Charge removed from hydro bills for Ontario small businesses. Thompson has tabled a bill to amend the Electricity Act,1998, after hearing small businesses are having a hard time affording their hydro. Thompson says the Auditor General revealed in 2011 that the government had already collected enough money to pay off Hydro One’s $7.8 billion stranded debt. And though the government removed the debt retirement charge from residential bills, businesses continue to pay it. She says the Ontario Electricity Financial corporation reported the government collected $859 million from the debt retirement charge in 2015-16 alone. – Blackburn News

Natural gas meets 35% of Canada’s energy needs, and phasing it out will require a 200% increase in electricity generation, according to Paul Cheliak, vice-president of government and regulatory affairs for the Canadian Gas Association. And the cost of that new power? About eight to 12 times higher than natural gas, per unit of energy, if wind power is used, 15 times higher for solar power, and four to nine times higher for renewable natural gas such as landfill gas. Cheliak was among the speakers at a panel discussion on the future of natural gas at a Canadian Association of Members of Public Utility Tribunals conference held last week in Vancouver. The discussion focused on whether natural gas will be an important bridge fuel in the shift to a lower-carbon world or the new coal. – Business Vancouver

The large-scale electrification of transportation and other energy-based services is widely seen as an important element of efforts to significantly reduce greenhouse-gas emissions produced by the combustion of fossil fuels. Major reductions in those emissions will be essential to meeting the requirements of the Paris Agreement on climate change, which the Intergovernmental Panel on Climate Change has termed “dangerous.” The focus on electrification has emerged at a time of three major technological revolutions in the electricity industry: renewable energy technologies, energy-storage technologies, and “smart” electricity grids. However, despite the rapid evolution of technology, the policy to accompany it has been slow moving. A technological revolution in energy systems is now under way. How governments respond to these developments will have a major impact on the shape of future energy systems, and their role in enabling us to meet the goals of the Paris Agreement. – Globe and Mail

Trump's energy plan coming one deadline at a time

President Trump's executive order on energy independence reached a crucial first deadline over the weekend for all agencies to report regulations that could hurt energy production from fossil fuels. The Energy Independence and Economic Growth Executive Order signed March 28 has been given the most attention for beginning the process of rolling back the centerpiece of former President Barack Obama's climate agenda, the Clean Power Plan. It contains three major deadlines that will make up his regulatory agenda on energy for the rest of the year. – The Washington Examiner

During February U.S. exports of liquefied natural gas (LNG) edged up by 800 MMcf from January to reach a new high of 52 Bcf, according government data. Meanwhile, some researchers see headwinds to growing gas imports by No. 3 U.S. LNG importer China and No. 5 India. The U.S. Department of Energy’s newly released LNG Monthly, with data through February, shows that the top five countries importing U.S. LNG based on volume since exports began from the Lower 48 in February 2016 are Mexico, Chile, China, Japan and India. A trade agreement announced last week between the United States and China could have implications for further increasing the volume of LNG exported. – Natural Gas Intelligence

Last week, Trump nominated two officials to the Federal Energy Regulatory Commission, which is responsible for permitting decisions on hot-button energy projects such as natural gas pipelines and export terminals. Those projects are increasingly in the crosshairs of environmental activists and Democrats. Greens have long targeted FERC, seeing the agency, which has easily signed off on infrastructure projects, as a rubber stamp for the energy industry. But the commission’s goals overlap with two prominent Trump initiatives: promoting American natural gas production and getting a $1 trillion package for U.S. infrastructure projects. Both sides see it as a crucial fight for setting the agenda on American domestic energy production. – The Hill

Alan Clarke, an economist at Scotia Bank, said he expected further electricity and gas price rises and that an acceleration in food price rises would push CPI inflation to 3.25% in the autumn. Clarke argued that the retail prices index (RPI), which includes some housing costs, was already at 3.5% and would rise to 4.25% before the end of the year, putting extreme pressure on consumers to cut back spending on non-essential items. – The Guardian

The Labour manifesto ahead of the June 8 vote raises a number of issues the party wish to address including the need to “ensure security of energy supply and keep the lights on” and that “one-in-ten households are in fuel poverty.” However, it also includes a promise to ban fracking, a pledge which will will affect the UK’s energy security, see potential UK jobs find their way overseas and keep the cost of energy bills rising. – Energy Voice

The Northern Territory resources minister Ken Vowles has fuelled hopes of at least a partial lifting of the territory's fracking moratorium late this year, talking up the prospects of onshore gas. The minister also noted the circa 30 trillion cubic feet of gas sitting offshore from the Territory, some of which could feed a potential multi-billion dollar expansion of ConocoPhillips' Darwin LNG project currently under study. – Australian Financial Review

Gasoline consumption rose by 4 percent compared with the same period a year earlier, a sharp slowdown from the 14 percent increase between 2015 and 2016 Gasoline consumption growth has been slowing since the middle of 2016 after surging for the previous two years. Rising crude oil and refined fuel prices over the last year are also likely to have constrained the growth in consumption and other fuels. Retail gasoline prices rose by around 10 percent between January 2016 and January 2017 while diesel prices climbed by almost 8 percent, according to data from the Ministry of Petroleum and Natural Gas. India's emerging urban and rural middle class is relatively sensitive to increases in the cost of fuel so rising prices have curbed demand growth. – Oil and Gas People