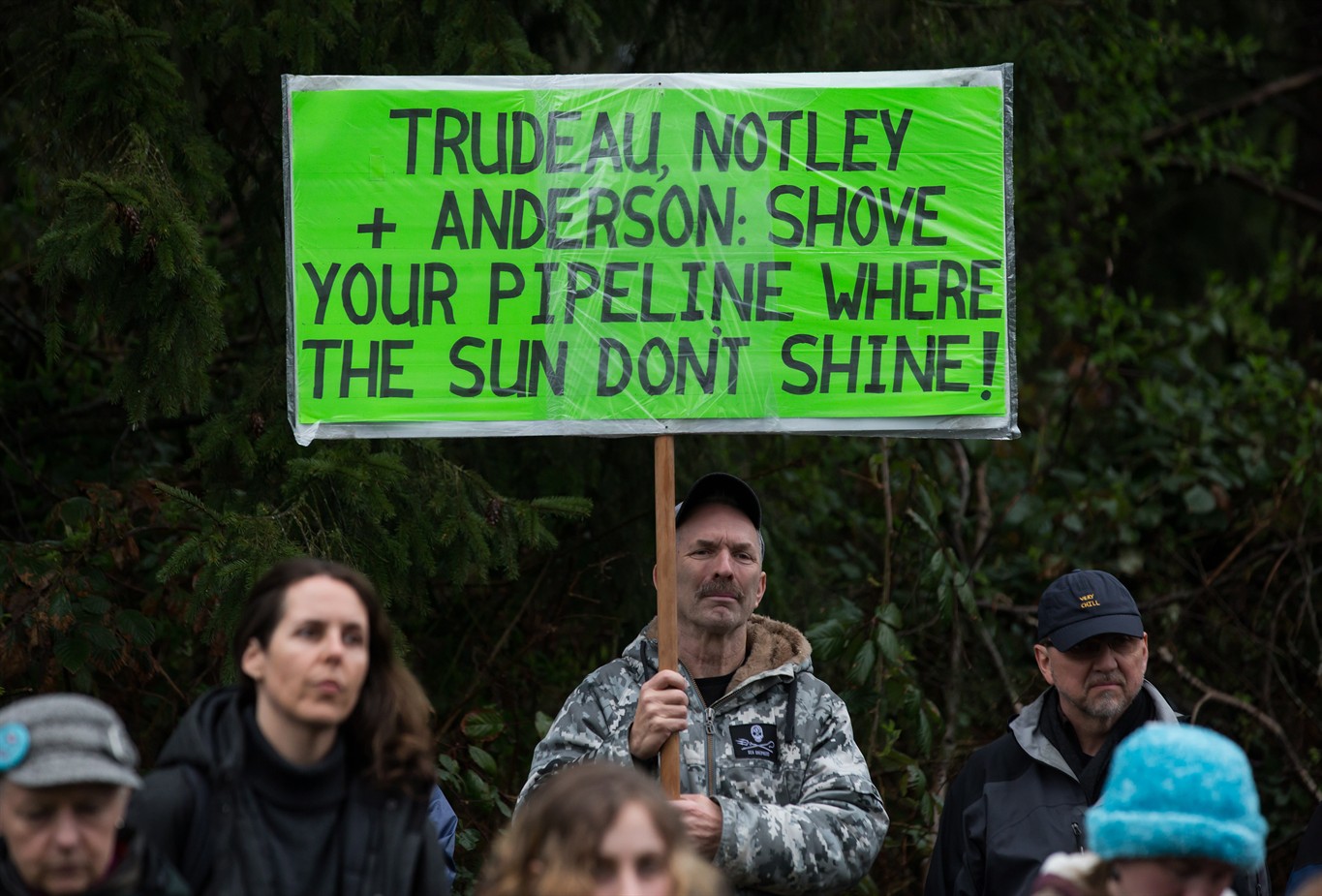 Canada’s oilsands industry suffered a major blow as Kinder Morgan Inc. halted most work on the Trans Mountain pipeline expansion, throwing into doubt a project that could have helped alleviate shipping bottlenecks plaguing the nation’s energy producers. The pipeline company is suspending all non-essential activities and ceasing to commit more resources to the project, which has faced opposition from the coastal province of British Columbia, whose land it traverses. Still, Houston-based Kinder said it will consult with stakeholders to try to reach agreements that will allow the project to proceed and set a May 31 deadline on the talks. Leaders in Alberta and the federal government, which approved and supported the project, vowed to keep fighting and pave the way for Kinder to see it through to completion. - Financial Post

Kinder Morgan is suspending "non-essential activities" and related spending for the Trans Mountain pipeline project, citing ongoing opposition from the British Columbia government. "In the current environment, we will not put [Kinder Morgan] shareholders at risk on the remaining project spend," Steve Kean, Kinder Morgan's chair and chief executive officer, said in a press release Sunday afternoon. The company said it will consult with stakeholders in an effort to reach agreements before May 31 that could allow the pipeline project to proceed. - CBC News

Kinder Morgan has set the stage for two months of high drama. The company announced it is suspending non-essential activities and related spending for the Trans Mountain pipeline expansion, casting a cloud over the future of the $7.4-billion project. It said it would still try to get agreements that would see the project advance, but would need to do so by May 31 or “it is difficult to conceive of any scenario in which we would proceed.” The news quickly spurred the leaders of the Alberta, British Columbia and federal governments to issue statements of resolve, positioning themselves for a tense few weeks. - CBC News

B.C. politicians, Indigenous leaders and environmentalists say the future of Kinder Morgan's Trans Mountain pipeline is in doubt. On Sunday the company announced it would suspend all "non-essential activities" and related spending for the Trans Mountain pipeline project, citing ongoing opposition from the British Columbia government. "I'm greatly encouraged by this news," said Grand Chief Stewart Phillip with the Union of B.C. Indian Chiefs. On Saturday, Stewart joined protesters at a Kinder Morgan work site in Burnaby. RCMP say about 200 people have been arrested around Trans Mountain facilities in Burnaby since mid-March. - CBC News

The twisting journey of the Kinder Morgan pipeline expansion has taken its most bizarre turn yet. Straight down the rabbit hole. Not only is the Alberta government considering investing public money in the $7.4-billion Trans Mountain project, official Opposition leader Jason Kenney thinks that’s a good idea. The United Conservative Party leader is not thrilled with the notion, but he thinks there’s probably no other option. “I believe there is a need for the federal and provincial governments urgently to pursue with Kinder Morgan some form of financial partnership to diminish the risk to the shareholders,” Kenney told journalists just minutes after Premier Rachel Notley had announced her government might soon be in the pipeline business. - Edmonton Journal

Jim Carr stood next to the Centennial Flame in front of Parliament’s Peace Tower and addressed a chilled knot of reporters and news cameras. An hour earlier Kinder Morgan had announced it was halting all non-essential spending on its Trans Mountain pipeline expansion project. If the company can’t find a way to proceed with the project, it will abandon it at the end of May. Crunch time. Carr is the natural resources minister, generally reckoned as a heavyweight in the Trudeau cabinet. This project is basically the sum and totality of his political credibility packed into one long, narrow and increasingly hypothetical tube. And now it hung by a thread. The tube, I mean. Or his credibility. Or my metaphor. Anyway, he seemed to be taking it well. - Maclean’s

A mirror could show Trudeau why Alberta is suffering. No research required — Rex Murphy

Fortunately, there are some rare people who have the courage to pursue the very darkest, most enigmatic questions, regardless of the cost to mental peace or even sanity itself. Such is our PM, Justin Trudeau, the very Galahad of fearless inquiry. Near midweek, the announcement came that his government would fund, by nearly $300,000, research into the deepest and most unsettling riddle of our entire national life: Why is our Canadian oil and gas sector falling behind? The fate of the Franklin expedition, which troubled us for so long, was just a Cracker Jack puzzle compared to this conundrum. - National Post

What ails our oil and gas sector? Trudeau's own policies — Candice Malcolm

The Trudeau government is spending $280,000 to study why Canada’s oil and gas sector is falling behind. Folks online were quick to propose a better way to answer this question: someone hand Justin Trudeau a mirror! (Who are we kidding, it’s Justin Trudeau, he probably owns thousands of mirrors). In all seriousness, if our Prime Minister really wants to understand why there is less investment in Canada’s oil and gas sector, he should look no further than his own policies. The Trudeau government has hardly been an ally to the oil and gas sector in Western Canada. - Toronto Sun

Oh, times do change. Back in 2008, the federal Conservatives’ election platform and Throne Speech promised to put a price on carbon, forecast to be $25 a tonne by 2010 and $65 a tonne by 2018. That’s much, much higher than the national minimum price of $20 a tonne starting next year. Since 2008, global warming hasn’t reversed, but conservative policy sure has. - Toronto Sun

The willingness of environmental activists and their elected and appointed allies to ignore the drumbeat of bad news about the security and costs of the region’s energy supplies is a stunning abdication of responsibility for sound public policies to protect both the environment and the economy. While responsible environmental policies are necessary, to assume that somehow New Hampshire and New England can quickly move from natural gas to 100% renewable energy, while avoiding any new transmission to deliver renewable energy, is naïve and dangerous. This assumption ignores the fact that New Hampshire’s electricity rates are consistently 50% to 60% above the national average, year-round, making us one of the most expensive states for electricity in the country. This has forced employers to explore options outside New Hampshire and New England to obtain lower electricity prices. - Concord Monitor

Truth is the first casualty in the coal wars — Ben Potter

Truth is the first casualty in war and the coal wars are proving no different. We've already seen ex-PM Tony Abbott and his small gang of coal warriors bent on doing untold violence to the truth by falsely asserting that building new coal fired power stations is the best way to restore affordable and reliable power. No expert authority – not the Finkel review of energy, not the Australian Energy Market Operator and the Australian Energy Markets Commission – supports this view. It's just the way a bunch of non-experts with an axe to grind against the Prime Minister feel. We've also seen energy minister Josh Frydenberg verbal the Australian Energy Market Operator's views on whether the closure of the AGL Energy's Liddell coal power station in 2022 will threaten the stable supply of power to the eastern states' grid. - Australian Financial Review