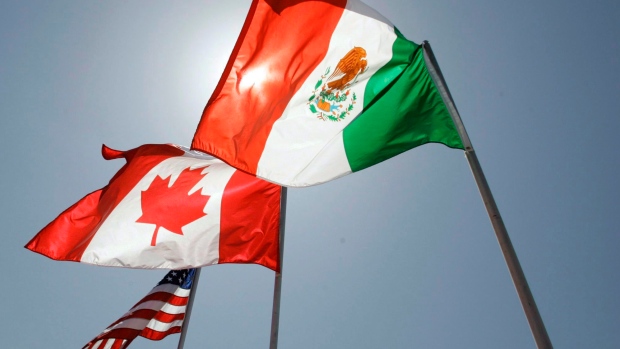 As NAFTA 2.0 negotiations begin, an old trade issue with a strange name has emerged to create unlikely allies across the political spectrum and staunch defenders in the oilpatch. Canada can't reduce U.S. access to fossil fuel products without a corresponding reduction in domestic access. The "proportionality clause" originally appeared in the Canada-U.S. Free Trade Agreement of 1988 and became a major issue in that year's federal election that returned Prime Minister Brian Mulroney to office. It was replicated six years later in the North American Free Trade Agreement (although Mexico won an exemption). - CBC

A two-day meeting of Canada's energy ministers ended Tuesday in Saint Andrews without any announcements about the Energy East pipeline link—or even a mention on the agenda. - CBC

Natural Resources Minister Jim Carr defended on Tuesday his government’s ability to get major resource projects moving saying the government has approved a number of proposals and it’s up to their proponents to get them built. - Chronicle Herald

Ontario electricity customers will fork over $100-million to pay a small group of large energy consumers for a conservation program that won’t save any energy. Worse, the government agencies responsible for overseeing the operation and management of the electricity grid already know the conservation program is unnecessary, but are moving ahead regardless. Fortunately for these companies—and unfortunately for electricity consumers across the province who have to pay for this program—Ontario’s massive surplus of power means that, in reality, there’s little-to-no chance in the next few years that the province will find itself short on power generation. The companies “bidding” into this auction are getting paid to provide a service that they know they’ll never have to provide. - Financial Post

The idea was nothing short of revolutionary: convert the nation’s millions of trucks, buses and other commercial vehicles to run on natural gas instead of gasoline and diesel. Back in 2008, the proposal by energy magnate T. Boone Pickens had some appeal. U.S. oil production was plunging, and the world’s biggest fuel-consuming country was becoming ever more dependent on foreign crude. But there was a different kind of revolution. New drilling techniques led to a boom in oil supplies from the U.S., and electric cars took off. Tesla Inc., which had yet to deliver its first electric car a decade ago, now has 455,000 reservations for its Model 3 — almost 20 times the number of natural-gas vehicles on U.S. roads as of 2015. Shares of Clean Energy Fuels are down 90% from a 2012 peak, and the company concedes that natural gas may only be a niche market as a transportation fuel. - Toronto Star

Muskrat Falls was always a done deal, and a bad one

Five years ago, with the Muskrat Falls project barrelling towards sanction, the government was having a hard time staying on point in defending it. Many people worried that the project might be far more than we needed or could afford. In fact, if you look back at how it was being sold, most of the government’s assertions have come to naught. It’s not affordable energy, and it’s not even particularly clean.  - The Newfoundland Telegram

Major oil companies are joining Silicon Valley in backing energy-technology start-ups, a signal that those with the deepest pockets in the industry are casting around for a new strategy. From Royal Dutch Shell Plc to Total SA and Exxon Mobil Corp., the biggest investor-owned oil companies are dribbling money into ventures probing the edge of energy technologies. The investments go beyond wind and solar power into projects that improve electricity grids and brew new fuels from renewable resources. - Edmonton Journal

SaskPower is asking for another rate increase, seven months after the Crown Corporation hiked rates by 3.5 per cent in January. The requested rate increase of five per cent would take effect March 1, 2018, if approved — an average increase of $6 per residential customer. There were two requests for five per cent hikes in 2016, but the second of the two was deemed too high by the province's rate review panel. - CBC

Why Blackstone Is Betting $7-Billion on Natural Gas

Blackstone Group LP is making one of its biggest bets on the growth of natural gas production, wagering that even if gas prices remain stuck at depressed levels, it can profit. The New York private-equity firm has built a roughly $7-billion bet on natural gas by investing in drilling fields, pipelines and a gas export terminal. - Wall Street Journal

Dozens of solar industry executives, government officials and foreign diplomats gathered in Washington on Tuesday to urge federal trade commissioners to reject a petition from two troubled domestic solar equipment manufacturers to impose steep tariffs and minimum price guarantees on similar imports. At risk, they argue, is the future of the solar industry itself. - New York Times