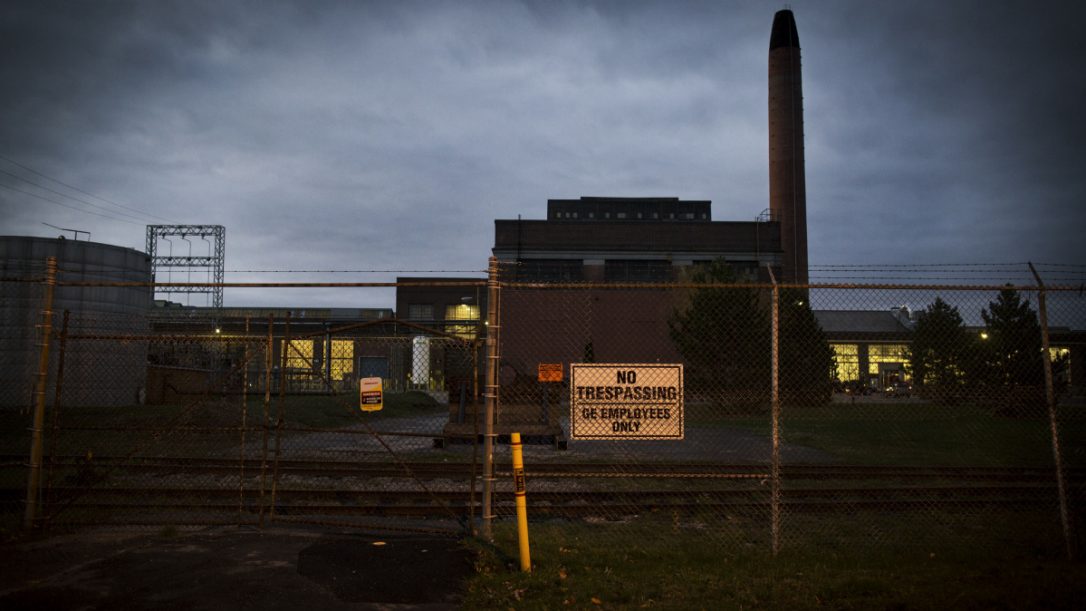 More than 350 workers at a General Electric plant in Peterborough, Ont., will be losing their jobs as the 125-year-old facility ceases manufacturing next year. Kim Warburton, a spokeswoman for GE Canada, said a drop in global demand for the company's goods prompted the decision that was announced Friday. The plant currently produces large engines for the oil and mining industries. Sales volume at the plant has fallen by 60% over the last four years, Warburton said. The plant — GE's first in Canada — will lose 358 manufacturing workers by the fall of 2018, Warburton said. An engineering division of the plant will remain in operation, with 50 engineering service workers employed, Warburton noted. - CTV News

Drip. Drip. Drip. Can you hear it? It’s the sound of economic opportunities going down the drain, a drop at a time. It’s the feel of job prospects dissolving. It’s a young family that can’t afford decent housing or small luxuries for the kids. Is this the future we’re headed for? Surely we hope not. But, with all the best intentions, those who oppose any expansion of the oil and gas industry in B.C. could deprive many in the province’s present and future workforce of the prosperity they have every reason to expect. Rather than encourage an industry that would lead the world in supplying the cleanest petroleum products on the planet, the province seems to be on a course to reject a major driver of B.C.’s future prosperity. To focus totally on ending our fossil-fuel dependency ignores the many ways we can mitigate its ill effects. - Vancouver Sun

For Canadian banks, climate change is no longer just a reputational risk issue to be brushed under the carpet of a slick pubic relations campaign. The Paris Agreement to phase out energy systems reliant on fossil fuel will mean changes to the credit quality of fossil fuel companies, power utilities, car manufacturers, and other players in Canada's hydrocarbon-heavy economy. There are also implications for the Canadian housing market and consumer credit. The rise of clean energy technology, from batteries to electric vehicles, alongside physical risks from climate change — increased severity of flooding and forest fires — are increasingly hard to ignore. This means that investors, auditors and regulators need more information from banks on how they are responding to climate change and associated shifts in the energy sector. - National Observer

Federal Finance Minister Bill Morneau’s plan to add a new tax on investment income in a corporation, along with tough new rules for compensation within a family business, comes at a time when businesses, particularly in Ontario, are being bombarded by unsustainable increases to minimum wages, the highest electrical power costs in North America, cap and trade or carbon taxes and increases to CPP and EI premiums, to say nothing of the trepidation attached to the NAFTA renegotiations. The current tax system for business was designed to motivate people to start businesses, and by anyone’s measure that plan has worked tremendously well. Today, small business is the backbone of our economy and generates by far the greatest percentage of new and sustainable jobs. The minister seems to have conveniently forgotten why owners of these corporations are taxed differently. - London Free Press

If all hell breaks loose on the U.S. power grid — a terrorist blows up a key natural gas pipeline, say, in the midst of a frigid winter — how will Americans keep the lights on? The answer is coal, according to a growing collection of the industry’s leaders and lobbyists. Their pitch conveys an image of a nation plunged into darkness as solar farms, wind turbines and plants fueled by gas fail to make up for the loss of coal-fired generation. Though it’s a view at least partly supported by a Department of Energy study released late Wednesday, the reality isn’t so dire. Energy Secretary Rick Perry called in April for his department to investigate whether rising supplies of wind and solar energy are threatening the grid’s reliability. - Financial Post

Singing the praises of coal — the virtuous stone that liberated humanity: Lawrence Solomon

Oil, gas, and hydroelectricity. Important though they’ve been to the economic life of mankind, none can hold a candle to coal, the most consequential energy source of all. This virtuous fuel did more than power the Industrial Revolution, and bringing unprecedented prosperity. Coal also brought enormous social and environmental blessings. Centuries before the Industrial Revolution, during the reign of Elizabeth I, England was being rapidly deforested by the growing demand for wood fuel — the poor were especially hard hit, with the wood needed to cook and keep warm increasing in cost at rates far exceeding inflation. Coal then came to the rescue, providing heat and warm meals for those who would otherwise have died. Coal, though then a dirty fuel, was liberating humanity, and being appreciated for it. Even today, with the world awash in oil and gas, coal continues to shine. - Financial Post

The panels are up and the inverters are wired — all that's left is one last visit from an electrician and Skidegate's most ambitious solar energy project to date will be complete. A total of 385 photovoltaic (PV) solar panels have been installed at the Haida Heritage Centre at Ḵay Llnagaay — an award-winning Indigenous tourist attraction and community hub overlooking the waters of the Hecate Strait. Chief Coun. Billy Yovanovich said the project brings the community one step closer to achieving energy independence and reduces its use of fossil fuels. Skidegate currently pulls electricity from a combination of sources supplied to the grid, first hydro and then a backup diesel system. - CBC

Trump’s failure to set a cost on carbon limits his own effort to expand the fossil fuel industry: Andrew Revkin

President Donald Trump's efforts to boost fossil fuel extraction face a courtroom hurdle of his own making. His March 28th executive order "promoting energy independence and economic growth" rescinded the Obama administration's calculation of the "social cost of carbon". The "social cost of carbon" was developed in large part to compare long-term costs from coastal flooding and other impacts of emissions of climate-warming carbon dioxide with upfront costs to the economy from curbing the burning of fossil fuels, the main source of such emissions. The value at the end of Barack Obama's presidency was set at roughly $40. At that price, the benefits of Obama's proposals to reduce emissions outweighed the economic costs. The Trump order required a new calculation and ordered agencies to use procedures issued by the Office of Management and Budget in 2003 to craft relevant regulations. A protracted delay in the Trump administration coming up with its own carbon-cost estimate could empower environmentalists pursuing legal challenges to mining, drilling. - Pacific Standard

Duke Energy asked regulators Friday to let its western North Carolina subsidiary raise household electricity bills by 16.7% and make consumers pay billions of dollars for a nuclear plant it won’t open and the cleanup of coal ash deposited in unlined pits. The country’s largest electric company asked the North Carolina Utilities Commission to let its Duke Energy Carolinas subsidiary raise rates by $647-million a year, adding $18.72 to the $104 monthly bill of the typical residential customer. The electricity provider for two million North Carolina customers also wants to collect nearly $1.7-billion over five years to close all its pits storing the toxic ash from burning coal. The Duke Energy Carolinas rate increase, its first in five years, would average 13.6% across all types of customers, including factories and retail stores. - National Post

It is a modern day truism that natural gas power plants are cheap while nuclear power plants are expensive. Another truth is that nuclear fuel can be very cheap on a per unit heat basis, even when compared to what is often called “cheap natural gas.” When natural gas prices are near their low point, efficient, affordable, and reliably constructed natural gas combined cycle plants give that fuel the ability to dominate electricity production and sales. That is even more true in a market where gaseous waste product disposal is generously provided for free. That’s our current situation. It’s time to change the game by adapting the well-proven, flexible and reliable combined cycle to be able to use nuclear fuel. That will match the best available heat conversion system with the superior fuel that is more abundant, needs no pipelines, produces manageable quantities of solid waste, and can operate inside sealed buildings. - Forbes

A federal agency in the U.S. has approved the construction of a high-pressure natural gas pipeline that's drawn intense opposition from some Ohio residents concerned about safety and property rights. The Federal Energy Regulatory Commission in Washington on Friday granted a partnership between Calgary-based Enbridge and Detroit-based DTE Energy a certificate of public convenience and necessity for the project. - CBC

Victoria's Daniel Andrews refuses to heed the lessons of his fellow Labor left government in South Australia by announcing an ambitious plan to ensure that 40 per cent of the state's electricity will be generated from renewables such as solar and wind in only seven years. To try to reach his mandatory target, Mr Andrews will adopt a Tony Abbott-style direct action policy to use taxpayers' money to directly subsidise renewables projects from the budget. Yet Mr Andrews will continue to maintain his bone-headed ban on developing gas supplies that could provide the baseload for reliable power when the sun doesn't shine and the wind doesn't blow. So it is hard to see his "jobs boom for Victoria" as anything other than a political stunt that will in fact push up power prices as welfare groups warn, reduce the reliability of Victoria's power supplies and cruelly put industry and jobs at risk at the one-time manufacturing heartland state of Australia. - Australian Financial Review

Australia could adopt a clean energy target by the end of the year, heeding the call of national energy providers and scientists as a means to cut carbon emissions and cap soaring power prices. Australian Prime Minister Malcolm Turnbull said the government was “carefully considering” the recommendation by the nation’s chief scientist Alan Finkel as a way to ensure affordable, reliable and cleaner power. Finkel in June led a list of recommendations presented to the government aimed at ending a decade of political warfare over climate policy, meaning coal-fired power generation using carbon-capture technology could potentially be used alongside gas and renewable sources such as wind and solar. - Reuters