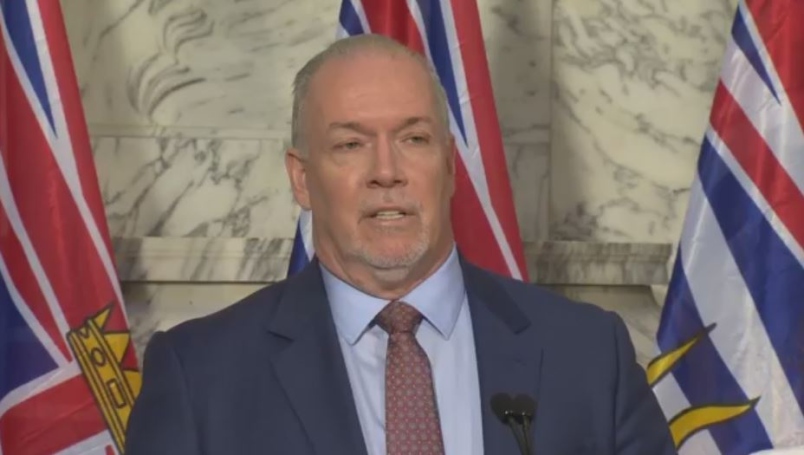 B.C.’s New Democrat government will continue building the Site C dam, choosing to finish the contentious project started by the previous Liberal government rather than pull the plug during mid-construction. Premier John Horgan made the announcement in the legislature’s library Monday, the same location almost three years earlier that Liberal premier Christy Clark first announced the province would proceed with the $8.9-billion dam. Horgan revealed the estimated cost of Site C would increase by $1.657-billion, because several contracts are already over budget and more financial risks face the dam in the future. The new project cost is now estimated at $10.7 billion, factoring in an increased risk contingency fund. - Vancouver Sun

Calling it a "difficult decision," the B.C. government has decided to go ahead with the controversial Site C hydroelectric dam, paving the way for work to restart. "At the end of the day, we've come to a conclusion that, although Site C is not the project we would have favoured or would have started, it must be completed," said Premier John Horgan in announcing the decision. "This is a very, very divisive issue, and will have profound impact … for a lot of British Columbians. We have not been taking this decision lightly." - CBC

Alberta’s NDP government can achieve environmental protection and economic benefits with the right government policies that protect our province, our resources and our jobs. However, the government’s model, as presented last week, will be harmful to these goals. Alberta’s climate plan, with its new regulations, does not support working Albertans. The model makes assumptions that it will generate new investment in clean technology, but doesn’t take into consideration it is putting investment at risk writes Canadian Association of Petroleum Producers president and CEO Tim McMillan. - Calgary Herald

The Conservative and NDP Opposition has asked the Ontario Provincial Police to investigate how nine power companies bilked ratepayers out of more than $260-million as outlined in last week’s auditor general’s report. Auditor general Bonnie Lysyk blamed the province’s Independent Electricity System Operator (IESO) for lax oversight of electricity companies that fobbed expenses on ratepayers. Nine power plants billed $260-million in “ineligible expenses,” including staff car washes, racoon traps and scuba gear. This was first revealed through internal audits, and orders were issued for repayment of $169-million against nine firms. Energy Minister Glenn Thibeault emphasized this week that “abuses within the system are completely unacceptable.” - The Toronto Star

Following the merger of Enbridge and Union Gas under their parent company Spectra last February, there is discussion about the two distribution utilities becoming one. In December Union Gas customers received notification that an application has been filed with the Ontario Energy Board to allow the two systems to operate as one. According to energy analyst Dan McTeague, this could create a “virtual monopoly.” “The structure of the market will be highly concentrated and in the hands of one particular player,” McTeague said in an interview on Afternoon Drive, “How do you question the distribution rates if you have only one player that is serving as a gatekeeper for what comes into Ontario?” - CBC News


Ontario Liberals out of touch with small businesses — Lorrie Goldstein

Out of the blue in May, Premier Wynne announced a 31.6% hike to minimum wage to take place over the course of 15 months, from October 1, 2017 to January 1, 2019. The Ontario Legislature’s Financial Accountability Office has predicted this will put at least 50,000 jobs at risk, while the TD Bank says 90,000 and the Keep Ontario Working Coalition, an employer’s group, says 185,000. A government that understood the vital importance to small businesses of cost predictability would have increased the minimum wage gradually. All of this is not to mention the other escalating costs small businesses have faced under Liberal policies to pay for such things as skyrocketing electricity bills and increasing natural gas costs, the latter caused by Wynne’s cap-and-trade carbon pricing scheme. - The Toronto Sun

This week, world leaders will gather in Paris for a two-year anniversary of the Paris Climate Agreement summit. Topics to be discussed are expected to include the United Nations’ 2009 commitment to raise $100-billion for climate-related measures by 2020 (with only about two-thirds of the fund currently committed to), corporate commitment to the Paris Climate Agreement, and new research on climate change and climate protection. - The Montreal Gazette

President Donald Trump ordered his Interior Department to write the new blueprint with the aim of auctioning oil and gas drilling rights off the U.S. East Coast – territory that his predecessor, former President Barack Obama, had ruled out. The Interior Department’s coming draft proposal, an initial milestone in replacing the Obama-era sale plan, dovetails with the oil industry’s push for new places to drill, said sources, who asked not to be identified before a formal announcement. Trump’s proposal would span the years 2019 to 2024, replacing the Obama plan, which runs through 2022. - Energy Voice

The east coast gas market remains "extremely challenging" for industrial buyers with contract prices much higher than they should be, despite an increase in gas supply from the Queensland LNG producers in recent months, the competition watchdog has found. While the Turnbull government has claimed a win on east coast gas supply thanks to its deal with LNG exporters in early October, the Australian Competition and Consumer Commission said the east coast gas market "is still not functioning effectively." "Even with more offers in the market and the LNG projects diverting more gas domestically, the supply and demand outlook for 2018 continues to represent a tight market," the regulator said in its latest east coast gas report, to be released on Wednesday. - Australian Financial Review