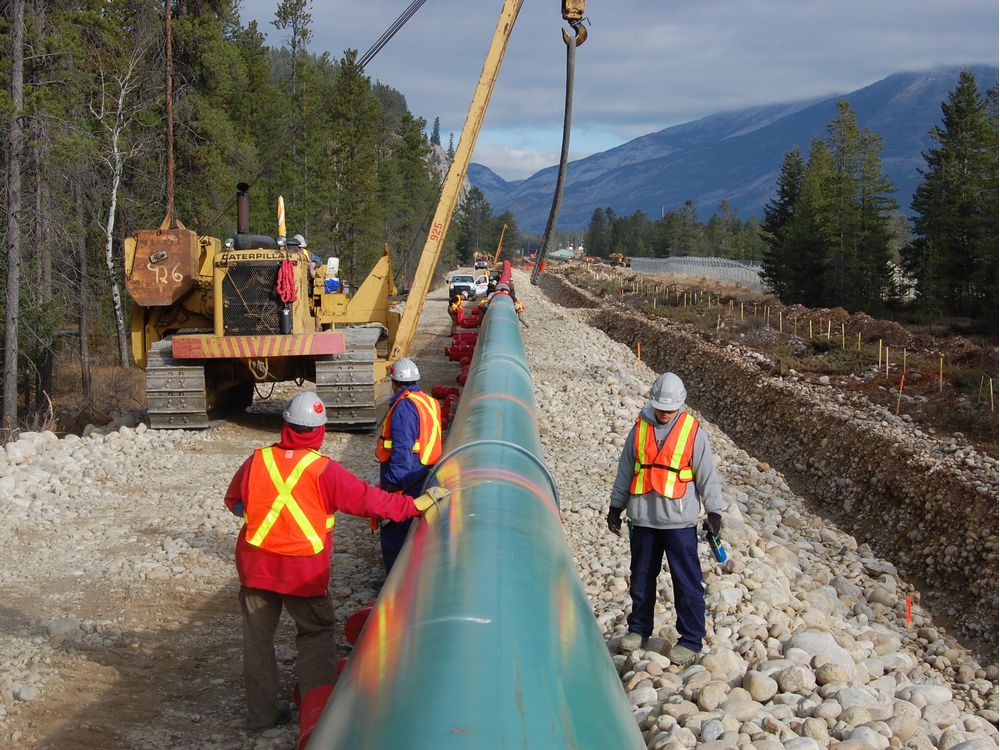 The National Energy Board (NEB) issued an order Thursday saying Kinder Morgan, Canada's Trans Mountain pipeline expansion is exempt from having to comply with two sections of bylaws in Burnaby, B.C. that were standing in the way of the $7.4-billion project. The NEB order, which comes three days after the regulator heard the case in Calgary, says the company is not required to comply with two sections of the city's bylaws – which required the company to get preliminary plan approvals and tree-cutting permits – as it prepares to begin construction in the area. - CBC

B.C.’s Environment Minister is sharply criticizing a National Energy Board ruling in favour of Kinder Morgan Canada’s efforts to bypass Burnaby bylaws that stand in the way of its Trans Mountain expansion project. “I’m shocked at the ruling and frankly I’m angry on behalf of British Columbians,” George Heyman said in an interview Thursday. “We’re reviewing the decision and exploring any options we have to appeal this decision. This is exactly why we’re fighting this project in Federal Court.” - Vancouver Sun

The private sector, we are always told, produces low costs and efficiencies. In many cases, this handy bromide is true. But as two recent bombshell reports point out, it does not hold in the world of electricity generation. Both the Ontario Energy Board (OEB) and the province’s auditor-general have produced damning indictments of the Liberal government’s hydro privatization strategy. They have found that it’s just too easy for private generating companies to abuse their market power – or, as the OEB likes to call it, “game” the system. As my colleague Rob Ferguson reported this week, an OEB report estimates that over several years, just one private generator, the Japanese-owned Goreway Station Partnership in Brampton, collected $120-million from the province that it didn’t deserve. Goreway denies that it deliberately did anything wrong. A day later, Auditor-General Bonnie Lysyk released another report that calculated gaming by private generators cost the province $300-million over nine years. In both cases, electricity ratepayers ultimately footed the bill. - Toronto Star

Despite auditor revelations that electricity customers were unfairly charged for raccoon traps and scuba gear, the hydro system overseer appears prepared to let $80-million in dubious claims slide. Economic Development Minister Brad Duguid said the Independent Electricity System Operator (IESO) has gone through a negotiating period with the gas and coal companies that submitted $260-million in claims that when reviewed were labelled ineligible. The IESO recouped $168-million, but about $80-million is still outstanding. “They arrived at those settlements, and two-thirds of those costs that were originally deemed ineligible have been paid back,” Duguid said Thursday. - Toronto Sun

Economists measure the performance of the overall economy through the level of and changes to gross domestic product (GDP), which is the sum of all spending and output generated. However, GDP doesn't adequately measure all the impacts of economic activity, notably things that erode our nation's long-term wealth – such as pollution. Pollution damages the environment, erodes physical assets and harms people, yet we do not have an adequate measure of how much it costs the economy and society. If we really want to understand the sustainability of economic activity in Canada, we ought to know how much our long-term wealth and prosperity is being diminished by pollution. Thanks to work by the International Institute for Sustainable Development (IISD), we now have a much better estimate of the costs of pollution to Canada. Its report found that pollution of all types cost Canadians at least $39-billion in 2015. For a Canadian family of four, that is the equivalent of $4,300 annually. - Globe & Mail

The Interior Department said Thursday it is delaying an Obama-era regulation aimed at restricting harmful methane emissions from oil and gas production on federal lands. A rule being published in the Federal Register delays the methane regulation until January 2019, saying the previous rule is overly burdensome to industry. Officials said the delay will allow the federal Bureau of Land Management time to review the earlier rule while avoiding tens of millions of dollars in compliance costs to industry that may turn out to be unnecessary. The action marks at least the third time the Trump administration has moved to delay or set aside the Obama-era rule, which was imposed last year. The rule forces energy companies to capture methane that’s burned off or “flared” at drilling sites because it pollutes the environment. An estimated $330-million a year in methane is wasted through leaks or intentional releases on federal lands, enough to power about 5 million homes a year. - National Post

A new chairman was sworn in on Thursday at the Federal Energy Regulatory Commission (FERC) who will lead the agency as it considers a directive from the administration of U.S. President Donald Trump to subsidize ailing coal and nuclear power plants. With the swearing in of Kevin McIntyre, a Republican, the FERC panel is now complete with five members. The commission, which did not have enough members to vote on issues until mid-August, will also consider applications for natural gas pipelines and liquefied natural gas facilities. Energy Secretary Rick Perry in September proposed that the independent agency issue a rule to bail out certain aging nuclear and coal plants by allowing them to recoup operating costs through regulated pricing. - Reuters

Australia’s manufacturing industry is the most energy-intensive in the world, and was the only developed country to see an increase in energy consumption between 2000 and 2015, the International Energy Agency said. The IEA has released a new global energy efficiency report collating 15 years of data, monitoring the effectiveness of nations’ energy policies and their impact. It found in 2000, Australian manufacturing had the third-highest energy intensity level of 15.3 megajoules, a figure which rose 1.5% to become the world’s highest at 15.52 megajoules in 2015. During the same period, every other nation that is part of the IEA recorded a decrease in energy intensity. Australia’s manufacturing industry’s actual energy consumption was well below other major manufacturing nations, such as the U.S., but was poorly utilized. - Sydney Morning Herald

AGL Energy has rejected Turnbull government pressure to extend the life of the coal-fired Liddell power station and instead revealed a $1.36-billion plan to replace it with electricity generated from gas, wind, solar and other supply. In a blunt rebuff of Canberra's request for the 45-year-old Hunter Valley plant to be either sold or have its life extended, the country's largest electricity producer stuck with its 2022 closure date and revealed that electricity from the portfolio of proposed new plants would cost 20% less to produce. - Australian Financial Review