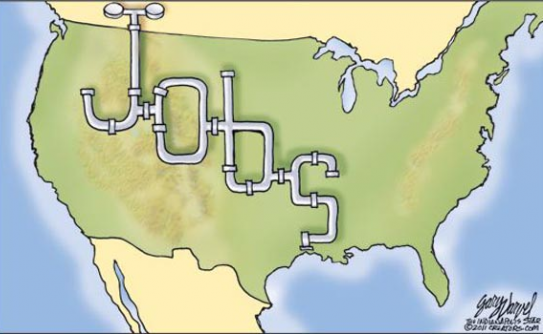 For nearly four years, Canada’s oil and gas sector has kept a low profile while managing two devastating blows – the collapse in oil prices and the barrage of environmental policies by new governments keener to jump on the green energy train than getting controversial pipelines built. It also refrained from being too adversarial while waiting for Prime Minister Justin Trudeau to deliver on his grand bargain — pipeline approvals for a climate change plan that could constrain its future growth. On Monday, the Canadian Association of Petroleum Producers switched to a new approach, issuing an urgent call for a course correction after sustaining such heavy damage energy investors are dumping Canada for Iran and Brazil among other places. It’s that bad. The sector’s struggles, by the way, are in stark contrast to the rosy picture of the national economy painted by the federal Liberal government, which is tabling its budget Tuesday. - Financial Post

Canada's energy industry – struggling with pipeline constraints and a costly oil glut – says new American tax rules and regulatory reforms are helping siphon away capital investment to the United States. Tim McMillan, chief executive of the Canadian Association of Petroleum Producers (CAPP), said the sector is seeing companies, including Canadian firms, looking at allocating more capital dollars in the United States while investment in Canada is decreasing. In fact, Canada's top energy customer is now its leading energy competitor, he said. "That's almost adding gasoline to a fire that's already burning," McMillan said of the recent U.S. tax reforms. "They are beating us on regulatory times. They are beating us on tax policy, on capital cost writeoffs. It is across the board." - CBC News

Royal Dutch Shell PLC is warning about the potential for a worldwide shortage of liquefied natural gas (LNG) in the mid-2020s as Ottawa mulls whether to lend a hand to a stalled Shell-led project in British Columbia. Shell's outlook for a tightened global LNG market is widely expected to boost the chances for the LNG Canada project to be built in Kitimat, said Dan Tsubouchi, chief market strategist at Stream Asset Financial Management LP. But a tax obstacle remains – the federal Finance Department must decide whether to grant an exemption to LNG Canada on anti-dumping duties imposed against imports of fabricated industrial steel components. "Following the wave of investment from 2011 to 2015, final investment decisions on LNG projects have nearly stopped. As LNG projects generally take more than four years to start production, new supply will not be ready until well into the next decade," Shell said in a report on Monday. - Globe & Mail

The world’s largest LNG trader, Royal Dutch Shell PLC, believes there will be a massive 275 million tonne supply shortage beginning in 2020 as an investment decision looms for its proposed plant on Canada’s West Coast. Shell’s global LNG outlook Monday estimates that US$200-billion in new investments would be needed to build liquefaction plants around the world as demand “has continued to defy expectations.” - Calgary Herald

A recent report from Environment Canada suggests the gap is growing between Canada’s greenhouse gas reduction promises and what its policies are likely to achieve. The report says that the gap between Canada’s Paris Accord commitments and the likely result of its policies has grown to 66 megatonnes – a 50% increase in only 18 months. Keith Stewart of Greenpeace suggested this is because of oil and gas production. But figures from the Canadian Association of Petroleum Producers suggest overall oil production declined by 15% between 2014 and 2016. In the report, Environment Canada offered few specifics on how the 66 missing megatonnes of carbon might be made up. It said greater reductions might come from investments in public transit and clean technology. Calculations of the capacity of forests and wetlands to store carbon may also increase, the report says. - iPolitics

The province plans to spend up to $1-billion over the next eight years for new partial upgrading facilities in Alberta to diversify the energy sector. The money will likely come in the form of $800-million in loan guarantees and $200-million in grants. The government hopes it will attract as many as five new upgrading facilities, representing $5-billion in private investment and 4,000 construction jobs. - Edmonton Journal

New Brunswick is in the midst of an unofficial election campaign, soon enough to be official, which makes it an ideal time for clarity concerning energy. It is inevitable that we will have to shift from reliance on fossil fuels to reliance on renewable energy sources. New Brunswick does have its nuclear plant and considerable hydro sources. However, it also has two functioning coal plants, which will now need to be phased out at a heavy cost. On top of this, there is the fast-approaching federal government’s carbon pricing deadline. There is also concern raised at recent regulatory hearings into NB Power’s “smart meter” plans. The cost of these exceeds immediate savings and longer-term savings may or may not materialize. New Brunswick voters need energy clarity, facts and honest appraisals to make any informed judgement this fall. - Telegraph Journal

The Town of Collingwood is calling for a judicial inquiry into the events surrounding the sale of 50% of the town’s hydro company in 2012. Lawyer William McDowell said in a presentation that there are “serious questions,” regarding the sale including who benefitted from the sale, potential conflicts involving senior management and council oversight of the transaction. City Council passed a resolution calling on the Chief Justice to appoint a judge to oversee the inquiry looking at a variety of issues leading up to the sale and following the sale. - Collingwood Connection

U.S. to overtake Russia as top oil producer by 2019 at latest — Osamu Tsukimori

The United States will overtake Russia as the world's biggest oil producer by 2019 at the latest, the International Energy Agency (IEA) said on Tuesday, as the country's shale oil boom continues to upend global markets. IEA Executive Director Fatih Birol said at an event in Tokyo the United States would overtake Russia as the biggest crude oil producer "definitely next year," if not this year. "U.S. shale growth is very strong, the pace is very strong" ... "The United States will become the No.1 oil producer sometime very soon," he told Reuters separately. U.S. crude oil output rose above 10 million barrels per day (bpd) late last year for the first time since the 1970s, overtaking top oil exporter Saudi Arabia. The U.S. Energy Information Administration said early this month that U.S. output would exceed 11 million bpd by late 2018. That would take it past top producer Russia, which pumps just below that mark. - Globe & Mail

Energy Secretary Rick Perry will travel to London to discuss nuclear energy with officials from Saudi Arabia on Friday as the Trump Administration pursues a deal to build reactors in the kingdom, according to two people familiar with the plans. Perry scrapped a trip to New Delhi to accommodate meetings at the White House this week, creating an opening for him to lead an inter-agency delegation to London, said the people, who asked not to be named to discuss administration strategy. The administration is considering permitting Saudi Arabia to enrich and reprocess uranium as part of a deal that would allow Westinghouse Electric Co. and other American companies to build nuclear reactors in the Middle East kingdom. The meetings in London between Perry and Saudi Arabia’s Minister of Energy and Industry Khalid Bin Abdulaziz Al-Falih are seen as a critical step in months of ongoing discussions over a potential nuclear cooperation agreement, bringing together key deal makers from each country. - Bloomberg

All liquefied natural gas (LNG) production has been shut in Papua New Guinea following a major earthquake, extending the shutdown of a gas treatment plant reported by ExxonMobil on Monday and translating to lost earnings for local partners Oil Search and Santos. Citigroup said it is assuming a one-month production outage at PNG LNG, which it estimates would cut Oil Search's 2018 earnings per share by 17%. - Australian Financial Review