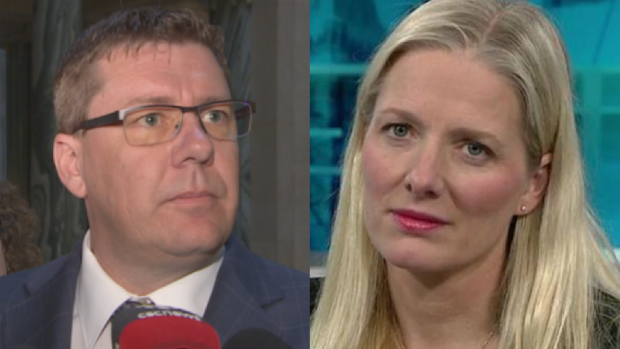 ‘We’re all in this together’: federal minister urges Saskatchewan to sign climate plan — Stephanie Taylor

The federal minister of environment and climate change Catherine McKenna is urging Saskatchewan’s leaders to sign on to a nationwide climate change bill. Saskatchewan will lose $62-million in federal money for emission reduction programs if it refuses to sign on to Ottawa’s plan. The deadline for signing the Pan-Canadian Framework on Clean Growth and Climate Change is February 28. Saskatchewan remains the only province that has not ratified the deal. In a recent statement to CBC News, Saskatchewan Environment Minister Dustin Duncan said they will only consider signing on when the federal government “relents on their threat to impose a tax on our people, industries and communities.” In order to sign onto the plan, the province needs to support the measures the plan puts in place, including the implementation of a carbon pricing system. Saskatchewan has a plan called Prairie Resilience which is opposed to a federal “carbon tax.” - CBC News

The federal government will invest $1.3-billion over five years to help protect lands and species at risk across Canada and another $1-billion to refocus the agencies responsible for regulating and assessing the impacts of major projects like interprovincial pipelines. The government also allocates $109-million over five years to put in place the federal carbon pollution pricing system. Companies purchasing energy efficient equipment or investing in clean energy generation equipment will benefit from accelerated depreciation for an additional five years. As part of the budget, the government will contribute $500-million to a $1-billion Nature Fund, to secure private lands to protect and to support provincial and territorial species protection efforts.  - iPolitics

Budget 2018 proves the Trudeau Liberals have given up trying to champion the middle class. Budget 2018 contains taxes that will strike at least 90% of middle-class Canadians. Meanwhile, the Trudeau Liberals intend to mandate what percentage of women publicly traded companies must have on their boards of directors and in their executive suites – or face punishment from Ottawa. Government is the problem. It’s not the One Percenters who’ve taxed away any economic or fiscal gain we’ve earned in the past two decades. There will be no appreciable increase in the size of the economy (or our slices of it). Indeed, the “gender equity” campaign will probably increase the average Canadian’s tax burden, making us feel even less middle class than we do now. - Toronto Sun

The Alberta government has two new reports in hand that touch on public dollars flowing into private energy developments – the auditor general’s latest report and the province’s Energy Diversification Advisory Committee. The later sets the table for Alberta to pursue value-added projects in the downstream oil and gas sector, such as expanding the petrochemical industry and investing in partial bitumen upgrading. The study suggests the government should hand out grants, offer loan guarantees and make direct investment into private-sector projects. The study also says that by 2040 as many as 100,000 jobs could be created and capital spending increased by $60-billion to $100-billion. The auditor general’s report however, underscores some of the potential pitfalls of this plan, including the amount of money being poured into the $9.4-billion Sturgeon Refinery, a project partnership between North West Refining and Canadian Natural Resources. The amount of tax money this project has cost is unclear. - Calgary Herald

Speaking to a crowd of Peterborough residents, Christine Elliott said that the Ontario Conservatives have a strong platform heading into the June election, with promises to reduce healthcare wait times, increase the number of long-term care beds in the province and take a second look at the recent changes to the sex education curriculum. The biggest change, says Elliott, is to scrap the carbon tax. She says if the Progressive Conservative party wins, it will look at ways to better balance the books and find the money to fund environmental initiatives without the new tax. Inside the naval club where Elliott was holding her meeting, the youngest supporters in the room were two business students from Trent University, who praised her decision to axe the carbon tax. - MyKawartha.ca

Unlike our appointed federal minister of environment and climate change, Catherine McKenna, who has a background in law and economics, I have extensive ecologically – and environmentally – related post secondary education, but vigorously oppose the Trudeau Liberal carbon tax as proposed. The increasing frequency of extraordinary climactic events globally support the fact that something must be done about greenhouse gas emissions. Even so, when the provincial Progressive Conservatives under Patrick Brown embraced Trudeau’s pernicious and cynical plan to impose a carbon tax on citizens already heavily taxed and burdened with rapidly rising fees to the average tune of 43% of income by three levels of government, I could only shake my head. Imposing a carbon tax financially penalizes and threatens the financial welfare of the citizens and job creating businesses across the country. The proposed escalating carbon tax would work its way across the country and include home heating and food necessities. - Guelph Mercury Tribune

The White House says talks will continue on a dispute over the future of the renewable fuel standard, which has pitted lawmakers from corn-producing states against those representing refineries. White House spokeswoman Sarah Huckabee Sanders says President Donald Trump had a productive meeting Tuesday with four Republican senators: Ted Cruz of Texas, Pat Toomey of Pennsylvania and Charles Grassley and Joni Ernst of Iowa. The White House says Trump has made clear his commitment to the renewable fuel standard and support for farmers and energy workers. - National Post

Banks raised their forecasts for oil prices for the fifth month in a row in February, signaling continued confidence that prices will continue to recover as the global supply glut drains due to production cuts. Brent crude – the global benchmark – is now expected to average $62 a barrel this year, while West Texas Intermediate – the U.S. standard – should average $58 a barrel, according to a poll of 15 investment banks surveyed by The Wall Street Journal toward the end of February. - Wall Street Journal