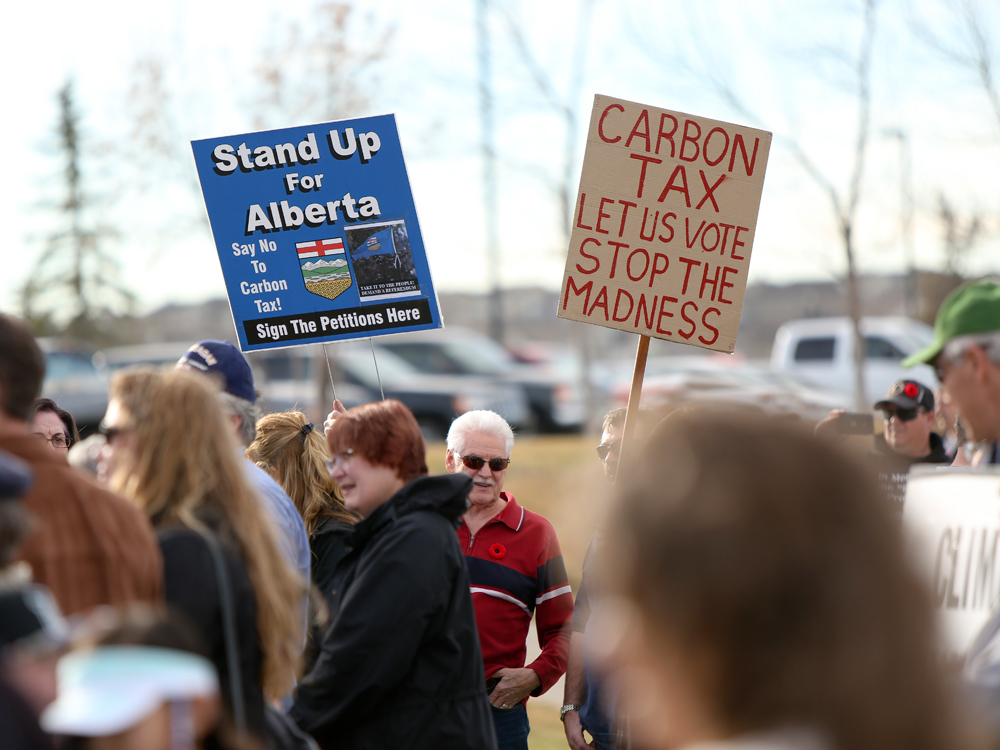 All pain and no gain: Alberta's unpopular carbon tax rises by 50% this week, fires up opposition — Claudia Cattaneo

In a perverse kind of way, this week’s 50 per cent increase in Alberta’s unpopular carbon tax – to $30 per tonne of carbon dioxide emissions – could be a big gift from Rachel Notley’s NDP government to her opponent, United Conservative Party (UCP) opposition leader Jason Kenney. The increase means the province now ties British Columbia for having the highest carbon tax in the country. But in Alberta it stings as the province uses more energy for heating and transportation. The cost in a typical Alberta household of a $30 a tonne tax is $667 a year, compared to $362 in the typical B.C. household, according to a study by Jennifer Winter, an energy economist at the University of Calgary’s school of public policy. At $50 a tonne, the annual cost is $1,111 in Alberta and $603 in B.C. - Financial Post

Transportation bottlenecks are helping increase the spread between what Alberta oil producers receive and the benchmark West Texas Intermediate (WTI) price, according to a report by Deloitte. A forecast released by the consulting firm Thursday predicts WTI will rise to an average US$55 a barrel this year, while Western Canada Select crude will drop almost 10 per cent to C$46.40 or about US$36. - Edmonton Journal

Alberta electricity consumers can expect to see a couple of surprises in their monthly bills in 2018: higher power prices and increased charges from the Balancing Pool. For the past three years, Albertans have enjoyed cheap electricity rates due to falling industrial demand and low natural gas prices, among several factors. - Calgary Herald

As political parties start rolling out promises on energy ahead of the coming election, an Ontario energy analyst says there's no quick fix to the province's energy system. Tom Adams says political parties are promising simple fixes to the province's electricity system. "The connection between those promises and the reality of our power situation gets more tenuous all the time," he said. - CBC

A perfect storm is bearing down on regional power and heating utilities, scrambling to collect overdue accounts from winter-battered ratepayers as the region braces for more snow and numbing cold. A new law preventing delinquent customers from being cut off until the ground thaws and a weeks-long deep freeze that’s plunged Southwestern Ontario into dangerously cold lows has created this perfect storm. The number of London Hydro accounts in arrears has skyrocketed to nearly 4,400 from about 2,000 as of Nov. 20. Chatham-based Union Gas, the region’s major natural gas distributor, has been busy fielding a flurry of calls from customers struggling to pay up, too. In sharp contrast to a year ago, when the region emerged from the warmest December on record in Ontario, the brutal reality of sub-zero cold is hitting the pocketbook earlier for many who can’t afford the deep freeze. - London Free Press

Producer prices in Canada increased by 1.4 percent in November, the most in almost three years, thanks mainly to higher prices for energy and energy products, Statistics Canada said on Thursday. Analysts polled by Reuters had forecast prices would grow by 0.8% from October. The advance was the largest since the 1.9 percent recorded in February 2015. Of the 21 major commodity groups, 16 were up, four fell and one remained unchanged. - Reuters

The United States is well-placed to join the likes of Saudi Arabia and Russia as one of the world's leading energy powerhouses, an analyst said Thursday. "There is a big shift in market structure taking place and I think, so far, it really hasn't got the attention it deserves. The U.S. is emerging as, not only a military and economic superpower, but as an energy superpower," Martin Fraenkel, president at S&P Global Platts, told CNBC. "We are expecting that by 2020, the U.S. is going to be one of the top 10 oil exporters in the world," he added. - CNBC

Australia's gas exporters are enjoying a brighter start to 2018 than for the last two years after stronger than expected growth in LNG demand last year averted a feared glut in supply and as oil prices reached levels not seen since December 2014. A robust 11.6% expansion in LNG consumption in 2017, spurred by soaring Chinese imports, meant that the increase in supply capacity as new projects started up in Australia and the U.S. was absorbed, according to Singapore-based DataFusion Associates. Bernstein Research put the LNG demand growth at 11%, the strongest since 2011, and is forecasting consumption will almost double by 2030. It labelled the view that markets are oversupplied and that a surplus may last for several years as "misconceptions." - Australian Financial Review