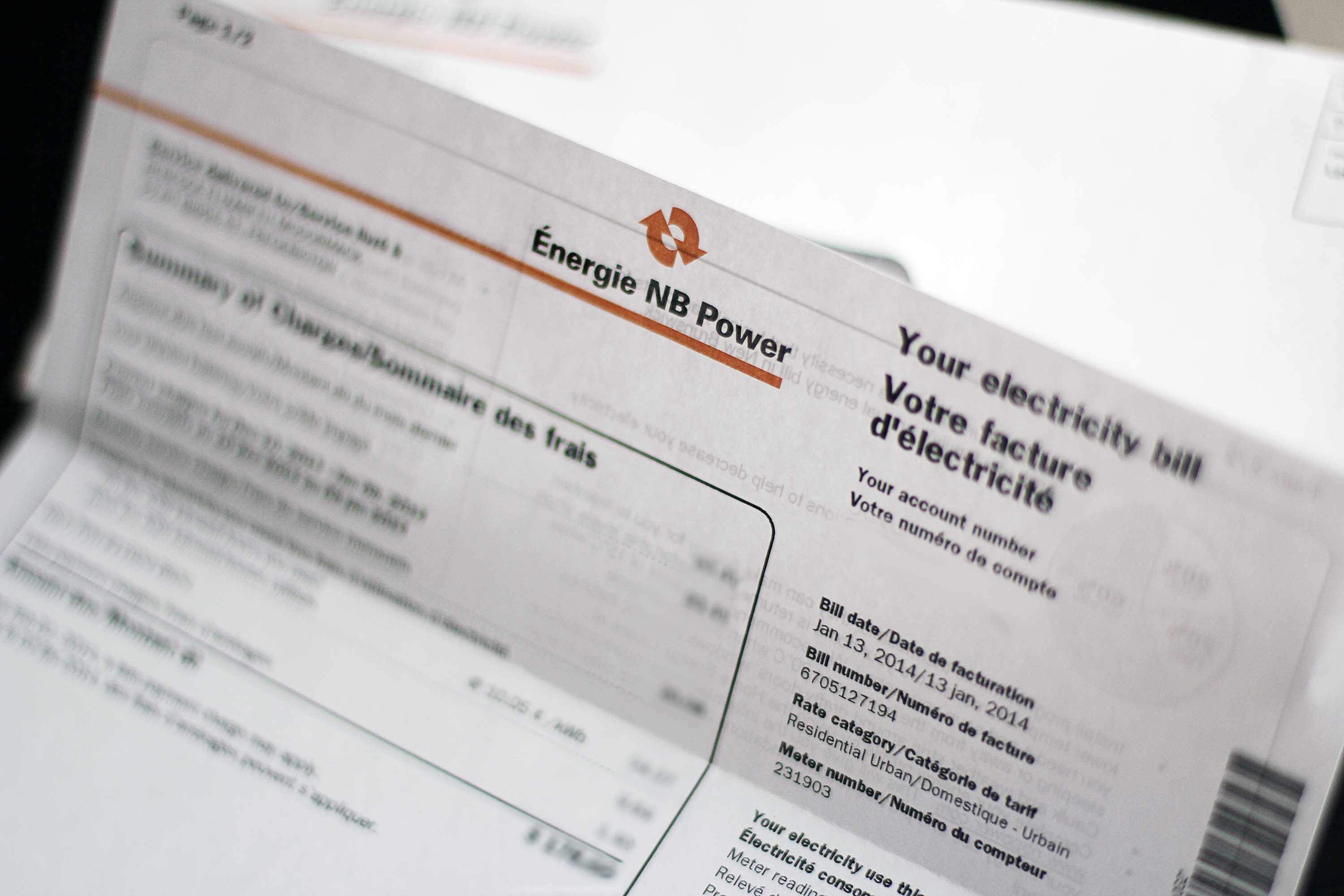 New rate increases announced at New Brunswick Power this week will add a two percent average annual increase to bills over the next 6 years. NB Power is also warning that even more increases will come into play due to the federal government’s looming price on carbon dioxide emissions, which could add another 1.7% to rate increases. Hearings into the 2018 proposed rate hike begin next month. NB Power has said the 2% increases are necessary after it was mandated by the provincial government to pay down $1-billion in debt to get it ready for its next big investment to refurbish the Mactaquac Dam. - Telegraph Journal

Premier Brian Gallant announced Monday that the province will contribute to the purchasing of a hydroelectric turbine to be installed in a pipeline in Dalhousie. The town hopes to sell the power from the pipeline and hydroelectric dam to NB Power, and thus earn $80,000 to $100,000 per year. The premier said that of the roughly $1.1-million cost, the province will pay up to $500,00. - Telegraph Journal

A non-profit clean energy group wants to make it easier for electric cars to travel along northern B.C. highways. The Community Energy Association is traveling from Prince George to Haida Gwaii, asking local governments for their support in setting up a network of charging stations designed to quickly refuel electric vehicles. As it stands, electric vehicle drivers in rural B.C. are largely reliant on household electrical outlets, which can take hours to recharge a battery. - CBC

The recent renewable energy procurement in Alberta has garnered much well-earned hype. It delivered wind power at prices that are a record low for Canada at an average price of $37/megawatt hour – cheaper than natural gas. It will deliver reliable power to Albertans, protect from future electricity price increases, and bring investment and revenue to rural communities where projects will be developed. - Edmonton Journal

Green energy wins the award for the most ill-conceived policy in the history of Ontario politics. It will take us decades to recover from the damage and debt it's caused us. The government won’t budge in a dispute with the Auditor General on how many billions of dollars we’re talking about.  - Toronto Sun

It will take governments a while to convince the population that taxes must significantly increase in order to save the environment. The government of Nova Scotia decided to hide their tax from the population. They did this by purchasing electricity generated from windmills at four times the cost of what they can generate for themselves. NS Power shareholders are then guaranteed a return on their investment of at least 9% and up by legislation. Customers then pay the costs of higher power rates and the government’s hands are clean. - Chronicle Herald

The Republican-controlled Federal Energy Regulatory Commission (FERC) dealt a blow to President Trump’s efforts to revive the coal industry, when they rejected one of the President’s plans for revival. The energy commission said in its decision that despite claims by the administration to the contrary, there’s no evidence that any past or planned retirements of coal-fired power plants pose a threat to reliability of the nation’s electric grid. However, the organization has agreed to continue to review the grid’s resiliency. The President’s plan had faced a variety of backlash from the public and other energy regulators. - Chronicle Herald

Company officials say a $1.2-billion natural gas liquids pipeline proposed from Montana to Kansas will help accommodate increasing production in North Dakota and reduce wasteful flaring of excess gas. Oneok’s 900-mile Elk Creek Pipeline would be able to transport up to 240,000 barrels per day of natural gas liquids from a terminal near Sidney, Montana, to Bushton, Kansas. CEO Terry Spencer said the proposed pipeline is “critical to meeting the needs of producers who are increasing production and are required to meet natural gas capture targets in the Williston Basin.” The project still needs regulatory approvals from federal, state and local agencies, the Bismarck Tribune reported. The pipeline wouldn’t cross North Dakota but would connect to existing pipelines in the northwestern part of the state. It will cross Montana, Wyoming, Colorado and Kansas, and move natural gas liquids from the Rocky Mountain region. - National Post

President Trump’s pro-growth energy policies are very much his own idea, and are a great accomplishment, with huge potential economic gains. Ending the war on hydrocarbon energy could generate 900,000 jobs and add $1.9-trillion to the economy. Taking advantage of fracking and America’s vast hydrocarbon reserves to 2035 would increase GDP by $3.7-trillion. Trump’s efforts to accelerate the growth of the American economy are in stark contrast to the work of France’s President Macron. In December, France passed a law banning all production of oil and gas in France. But France’s work creates an opportunity for the U.S. to construct an alternative pole based on energy realism and attract countries that recognize that cheap hydrocarbon energy will remain essential to developing and growing their economies for the foreseeable future. -National Review

California communities demanding oil companies protect them from rising sea levels weren’t as sure about their vulnerability to climate change when they sold debt to investors, according to court filings and bond documents. Seven local governments in California are suing Exxon Mobil Corp. and other major oil producers for court orders forcing those companies to cover the costs of sea walls and other infrastructure projects meant to fortify low-lying areas. Now Exxon, one of the defendants, is launching a new counterattack by highlighting past bond disclosures in which its government critics suggested they couldn’t predict whether and when sea levels would rise. The underlying lawsuits are part of an aggressive strategy to hold fossil-fuel companies responsible for climate-change costs that the plaintiffs estimate could run to billions of dollars. The companies dispute those allegations, casting the lawsuits as an abusive campaign by California law-enforcement officials to target political opponents through the legal system and stifle debate on climate change. - The Wall Street Journal

The West Australian government has promised to help fast track the development of a pipeline from the Browse gas fields to the North West Shelf processing infrastructure at Karratha on the Pilbara coast to solve a long-running dispute over the multibillion-dollar project's development. Premier Mark McGowan said his government was working closely with Woodside Petroleum to bring the gas onshore as the company and its Browse joint venture partners chip away at making a final investment decision on the Browse project, located about 425 kilometres north of Broome. A major project development would be a shot in the arm for the West Australian economy, which has endured a painful downturn that pushed commercial vacancy rates to 20-year highs and drove up unemployment. - Australian Financial Review

Why we can't do without the power of Snowy 2.0 — Josh Frydenberg

Snowy 2.0 will make renewables reliable, reduce volatility in the electricity market and help to bring down rising electricity costs. It builds on the foundation of the Snowy Mountains Scheme, which nearly 70 years ago then opposition leader Robert Menzies described as a "great national work" that was "vital to the real industrial development of this country." With only 2% of construction visible above ground, the scheme involved 16 major dams, seven power stations, a pumping station and 225 kilometres of tunnels, pipelines and aqueducts. It was an engineering feat of international renown that provided a platform for Australia's economic development for decades to come. Now history is repeating itself. Snowy 2.0 is the Turnbull government's plan to expand the original scheme with an additional 2,000 megawatts of capacity and 350,000MW hours of storage. It represents the largest energy storage project in the southern hemisphere and the largest renewable energy project in Australia, creating up to 5,000 jobs and producing enough power for 500,000 homes. - Australian Financial Review