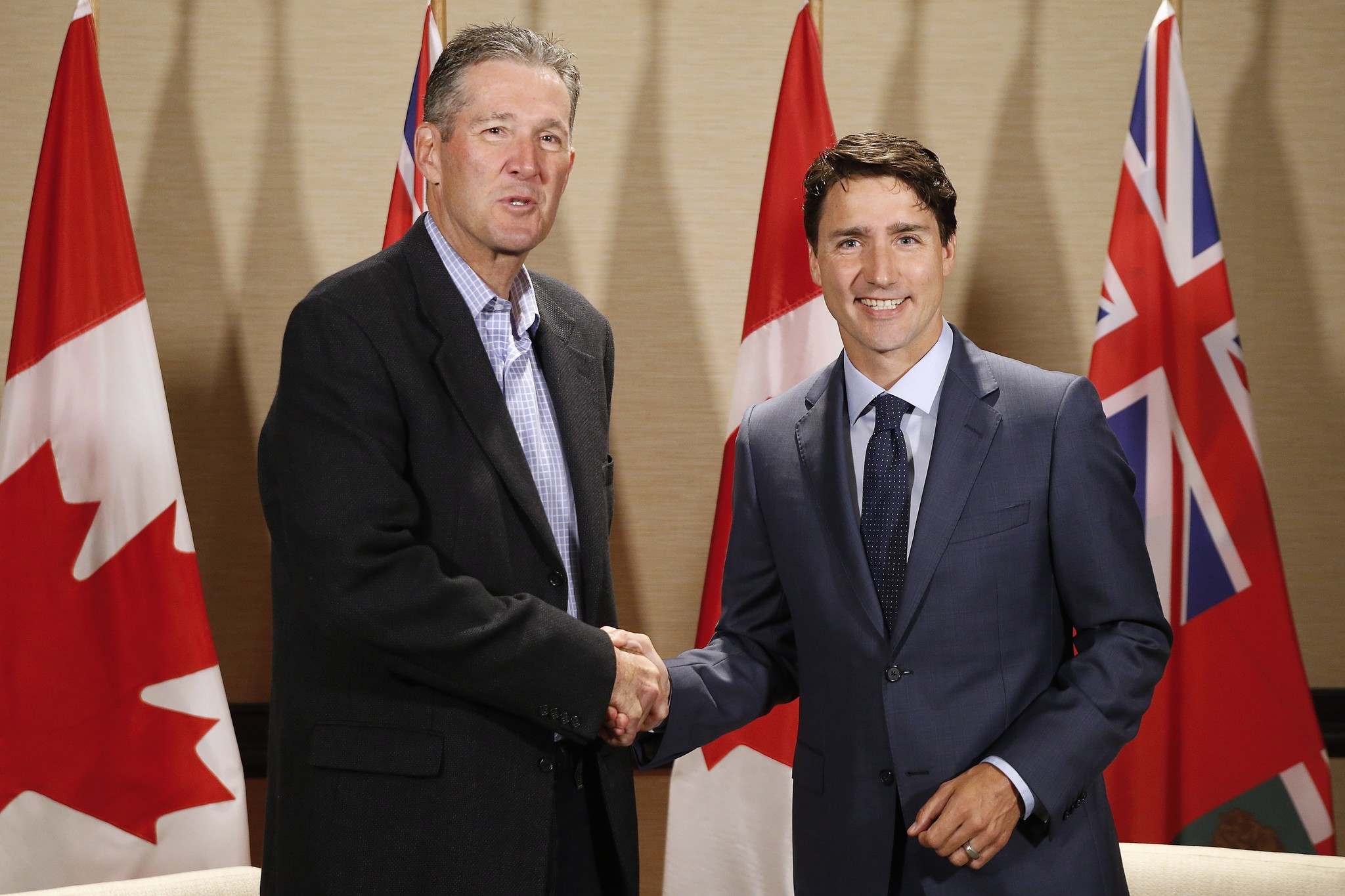 Manitoba’s Progressive Conservative government is presenting a budget today that is expected to include income-tax cuts, a new carbon tax and some spending controls. The budget will say when the province’s $25-per-tonne carbon tax is to take effect and outline where the roughly $260-million it will raise annually will be spent. “It’s going back to Manitobans,” was all Premier Brian Pallister would say Friday. The government has hinted at using the money for its planned income-tax cuts and other forms of relief to lower costs for families. The federal government has mandated that the provinces enact a carbon tax this year that would start at $10 a tonne and increase to $50 a tonne by 2020. Pallister has said Manitoba will keep its tax at $25 a tonne. - Chronicle Herald

It was apparent after Saskatchewan Premier Scott Moe’s meeting with Prime Minister Trudeau that the provincial and federal governments remain at odds when it comes to a carbon dioxide emissions tax. Moe said, “I think the entire conversation was a constructive conversation. And the fact that the conversation is happening I think is necessary.” The federal Pan-Canadian Framework on Clean Growth and Climate Change was a focus, as Saskatchewan remains the only province to not sign on to the plan, objecting to a carbon tax. Moe pointed out that the Saskatchewan government has its own plan for reducing carbon emissions, the Prairie Resilience plan, announced in December. - Star Phoenix

Wynne’s ‘choice’ for voters no choice at all — James Wallace

As soon as Doug Ford was named leader of the Ontario Progressive Conservatives, Premier Wynne took to twitter to criticize him and the party. “The Conservatives’ plan to kill carbon pricing and rush to balance the budget will put as many as 40,000 public sector jobs at risk,” Wynne said in another tweet. “That means higher class sizes, longer waits for healthcare and fewer community supports.” Ontario’s Liberal government is singularly adept at political character assassination. You don’t govern for 15 years without being good at winning elections. While atrociously bad at governing, they excel at marketing, virtue signalling and selling mismanagement as progress. Ford has said he plans some changes to the party platform, and there are questions over the financial impact should the Tories refuse to implement the federal carbon tax, however, it’s both idiotic and Liberal spin to suggest the Conservatives plan to campaign on a hack and slash fiscal plan. - Toronto Sun

Two large protests congregated in B.C. this weekend – one in Burnaby warning about the environmental dangers of the Trans Mountain pipeline expansions, and another in Vancouver arguing for the economic need of the project. The march in Burnaby gathered thousands of people and ended up just outside Kinder Morgan’s Burnaby tank farm. A smaller, 250-person protest gathered at the same time in downtown Vancouver. Supporters argued that delaying the pipelines construction will harm the Canadian economy. According the pollster Insights West, 45% of residents in Metro Vancouver support the project, while 47% oppose it. - Vancouver Sun

Oil risks sliding back under $60 a barrel as a surge in U.S. shipments to Asia threatens to undermine a deal between OPEC and its allies, according to ING Groep NV. While the producer group complied with a pledge to curb output and ease a glut in 2017, U.S. flows that are gaining a bigger slice of the prized Asian market may prompt some nations to boost supplies, said Warren Patterson, a commodities strategist at the Dutch bank. The resulting fallout could drag down crude prices after a rally of more than 40% since June he said. - Calgary Herald

OPEC is breaking down into two camps after more than a year of unity. On one side is Saudi Arabia, which wants oil prices at $70 a barrel or higher, and on the other is Iran, which wants them around $60. The split is driven by differing views over whether $70 a barrel sends U.S. shale companies into a production frenzy that could cause prices to crash. At stake is OPEC’s production limits, which are among factors helping the oil market’s months long recovery. Iran wants OPEC to work to keep oil prices around $60 a barrel to contain shale producers. Saudi Arabia has played down shale’s ability to upset the market and has touted OPEC’s alliance with the world’s largest crude producer, Russia, as a bulwark against U.S. output. Concerns about shale output will likely dominate OPEC’s next meeting in June in Vienna, OPEC officials say. - Wall Street Journal

The Renewable Duel Standard, which forces oil refiners to mix corn-based fuel into gasoline, is one of history’s great policy boondoggles, and should be scraped. There’s bipartisan support in Congress for such a move. The corn ethanol mandate was created under the Energy Policy Act of 2005. Two years later, President George W. Bush signed the Energy Independence and Security Act, which expanded the program by providing generous tax credits and subsidies to corn growers and ethanol blenders. The mandate soon diverted 40% of America’s corn crop away from the food supply. The country has endured a startling amount of economic disruption for what is clearly an inferior source of energy. - Wall Street Journal

French President Emmanuel Macro took a jibe at U.S. President Donald Trump on Sunday for his decision to withdraw the United States from the Paris climate agreement. Macron did not name Trump while speaking at the first meeting of the International Solar Alliance in New Delhi. But while hailing the “solar mamas,” a group of women trained as solar engineers, he said the women had continued their mission to promote solar energy even after “some countries decided just to leave the floor and leave the Paris agreement.” - Toronto Star

The Business Council of Australia (BCA) has called on state and territory governments to abandon their respective renewable energy targets saying they will push up electricity prices and threaten the success of the Turnbull government’s National Energy Guarantee. While some energy retailers are unhappy with some of the details ahead of next month’s crucial Council of Australian Governments meeting, the BCA has called on business to back the new scheme which is the Coalition’s alternative to the Finkel Review’s Clean Energy Target. But the BCA took aim at Labour state and territory governments for their renewable schemes saying it was counter productive and would increase electricity prices. The federal government wants states to get behind the National Energy Guarantee, warning state schemes can count toward but not exceed any national targets. - Australian Financial Review

Australia’s largest energy companies have warned there are serious flaws in the Turnbull government’s National Energy Guarantee (NEG) which needs to be overhauled before it is signed off by state and territory ministers next month. With federal Energy Minister Josh Frydenberg pushing to deliver the NEG as one of the Coalition’s key political achievements this year, big energy retailers have urged the Energy Security Board – which is finalising details – to keep the design simple or it will risk distorting financial markets and push up prices. Energy Australia executive Mark Collette said the NEG should be putting the emissions guarantee on generators, rather than retailers. He said an emissions guarantee on retailers would be onerous and threaten liquidity in the financial markets. Smaller retailers have warned the NEG could entrench the power of big generators and retailers and major changes to the National Electricity Market could push up power prices. - Australian Financial Review