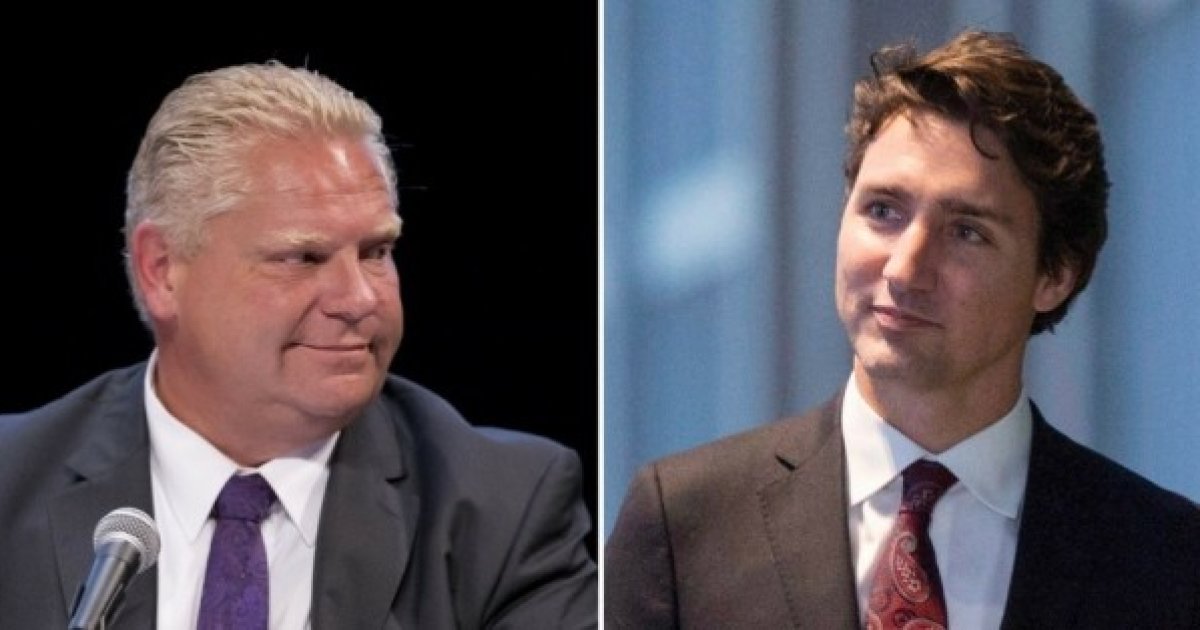 The prospect that Doug Ford could be in charge of Canada’s largest province by July 1 is bad news for the three main federal leaders. For Prime Minister Justin Trudeau, it could mean that the federal-provincial window of opportunity to execute some of his government’s signature policy missions is inexorably closing. Without a high degree of provincial buy-in, the rollout of Trudeau’s climate pricing policy risks being anything but smooth. The main policy takeaway of the abbreviated Ontario leadership campaign was a reversal of the Tories’ carbon-tax friendly position. Ford set the stage for that reversal. Among the leadership candidates, he also came across as the least amenable to the federal government’s carbon pricing agenda. So far, the carbon pricing debate has mostly been playing out on a Western Canada battlefield. A Tory victory in Ontario in June would bring that battle to Central Canada just in time for the federal election. - The Toronto Star

Federal Environment Minister Catherine McKenna said in a letter to her Saskatchewan counterpart Dustin Duncan that the province will be subject to a federal carbon tax if it doesn’t sign on to a national climate change plan by the fall. McKenna wrote that she “remains hopeful that you [the province] will change course ahead of the Sept. 1 deadline for all provinces and territories to submit their carbon-pricing plans.” Saskatchewan Premier Scott Moe said as recently as Friday that the province has not changed its mind about being the lone holdout on Ottawa’s Pan-Canadian Framework on Clean Growth and Climate Change. McKenna said Saskatchewan will be subject to a carbon tax, whether it signs on or not. - The National Post

Federal government refusing 'no' for an answer on carbon pricing in Sask. — Alex Soloducha

Canada's Minister of Environment Catherine McKenna has written to her counterpart in Saskatchewan saying she won't accept the province's request to avoid pricing carbon. McKenna sent a letter to the province's Environment Minister Dustin Duncan on Friday in response to one he had sent her on March 1, saying that carbon tax would result in "carbon leakage, lost jobs and human vulnerability.” “To be clear, we cannot accept your request not to price carbon in Saskatchewan,” McKenna wrote. “Among other reasons, it would be patently unfair for one jurisdiction to avoid participating in this important national effort to support clean growth and cut pollution.” - CBC News

The carbon capture and storage (CCS) system at Estevan’s Boundary Dam Power Station in Saskatchewan has captured two-million tonnes of carbon since its launch four years ago. It’s the equivalent of taking half-a-million cars off the road. The system captures an impressive two-thirds of the carbon emitted, bringing emissions down below federal levels. When the CCS is attached to a coal-fired unit, levels of emissions are lower than on a state of the art natural gas plant. However, the CCS system is still extremely expensive, a bone of contention for environmental activists who claim the money invested in the CCS would have been better served elsewhere. Federal Minister of Environment and Climate Change Catherine McKenna acknowledged the technology in a response to the province on March 12 but repeated that the province would need to mandate a carbon tax. - Global News

Foreigners are financing and organizing opposition in Canada to natural resource development, part of an anti-fossil-fuel campaign that is costing our economy an estimated $15-billion this year, due to lack of access to international markets, and much more in lost capital investments. The most recent proof comes from a leaked U.S. document called the “Action Hive Proposal” written by Cam Fenton, an employee of the California-based environmentalist NGO 350.org. The document lays out plans for its “Purpose and Shared Goals: This group is coming together to support mass popular resistance to construction of the Kinder Morgan pipeline.” 350.org is not the only U.S. organization to provide money and resources to similar projects in Canada. Trying to shut down fossil-fuel development is not viewed as radical to many environmentalists, even though the economic consequences would be disastrous. - The Financial Post

Alberta is committing up to $1-billion to grow its petrochemical industry. Energy Minister Marg McCuaig-Boyd says the money will be used for loan guarantees, grants and royalty credits to spur more private investments in the sector. Money will also be distributed in royal credits for the Petrochemicals Diversification Program, and for loan guarantees and grants for a petrochemical feedstock program. The money is on top of $1-billion in loan guarantees and grants recently announced by Premier Rachel Notley to deliver financial incentives for more partial upgrading by oil developers in Alberta. - The National Post

The once sky-high aspirations to develop a liquefied natural gas (LNG) industry on Canada’s West Coast have crashed to the ground, but experts say the window of opportunity has yet to close as demand for the resource continues to rise around the globe. LNG exports from the U.S. continue to rise, some of which is produced in Canada and transported south by pipelines. Natural gas prices in Alberta remain depressed without domestic demand growth and insufficient capacity to export. But all is not lost on the West Coast, as some propose LNG export projects are still in development, including LNG Canada, a consortium led by Shell. The main challenge facing West Coast LNG project proposals is their cost. - CBC News

A new fund, paid for with carbon-tax revenue, will yield roughly $5-million for green projects, although how the money will be spent and when it will begin to flow is still unclear. The 2018-19 budget tabled Monday earmarked a one-time $102-million endowment for the creation of a Conservation Trust Fund which will be managed by the Winnipeg Foundation and administered by the Manitoba Habitat Heritage Corporation — a non-profit Crown corporation. The corporation will get the income from the foundation's investments and direct them to programs around the province, with a focus on opportunities to match funding. - CBC News

US Energy Administration warns on boom in US shale — Glenn Dyer

America’s major shale oil producing areas will lift production by 131,000 barrels a day in April to 6.954 million barrels a day, according to a report from the US Energy Information Administration released Monday. Oil output from the Permian Basin, which covers parts of western Texas and southeastern New Mexico, is expected to see the largest climb among the big shale plays, with an increase of 80,000 barrels a day. That was after a Wall Street Journal report appeared on-line claiming OPEC was breaking down into two camps after more than a year of unity off the back of the 1.8 million barrels a day production cap. The paper said that on one side is Saudi Arabia, which wants oil prices at $US70 a barrel or higher, and on the other is Iran, which wants them around $US60. - ShareCafe

Energy policy supremo Kerry Schott has sought to calm fears that the proposed National Energy Guarantee will only push up costs of power supply, saying "the worst is over" on electricity price hikes despite the "absolute mega-disruption" going on across the sector. Ms Schott, chairwoman of the Energy Security Board, which is drawing up an outline of the NEG policy to present to the Council of Australian Governments energy council next month, said that in particular she believed that worries about a lack of availability of wholesale power contracts were unfounded. Smaller retailers and business energy suppliers such as ERM Power have voiced concerns that the contract-based supply system envisaged under the NEG would only entrench the power of the big three generator-retailers, reducing competition and clamping down on the availability of the wholesale power contracts that they need to supply effectively. - Australian Financial Review