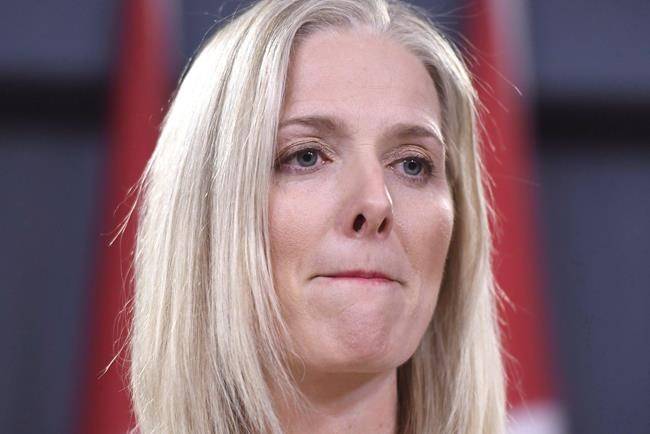 Federal Environment Minister Catherine McKenna says Canada is committed to meeting its climate change targets despite a growing gap between promises and emissions projections. “We’re all in,” said the minister in Edmonton yesterday. The Paris climate accord commits the country to reducing emissions to 517 megatonnes by 2030 – significantly lower than the 2015 emissions point of 722 megatonnes of carbon. In December, the government delivered a report to the UN outlining progress on reaching the target. The report acknowledged that both current and planned policies are likely to leave the country 66 megatonnes short of its target. McKenna said this wasn’t all bad, as the report was also based on economic growth. She also pointed out the carbon pricing system being implemented in Canada as a means by which their goal was being achieved. - The Chronicle Herald

Experts say that the Tory government could end up with revenue from a carbon tax anyway thanks to proposed federal requirements. The carbon tax as proposed under former leader Patrick Brown would fund major campaign promises ahead of a spring election, including a 22.5% income tax cut. But the new candidates have all vowed to scrap the tax. But University of Calgary economist Trevor Tombe says that the carbon tax is inevitable due to federal legislation. Therefore, the province could still reap the revenue of a carbon tax. Tombe said a court challenge over the matter is unrealistic. - The Chronicle Herald

Non-profit organizations in small towns in Alberta are ringing the alarm over the impact of the provincial carbon tax. Some say the additional costs involved in paying the tax could threaten their existence in communities that rely on them. "Our carbon tax is approximately $1,200 per year," said Ray Sharp, Sundre West Country Centre board member. The centre is open to over-50s, hosting a wide range of events for seniors every day of the week, for many providing a lifeline. - CBC

Last month, we learned from Scotiabank that lack of export pipeline capacity and the resulting discount on Canadian oil will cost the Canadian economy $15.6-billion a year, or nearly $43-million a day. That loss affects provincial and federal revenues as much as corporate income. We are all losing. Also last month came the unveiling of the Trudeau government’s new suite of policies for reviewing and approving major energy infrastructure projects, such as oil and gas pipelines. So is there anything in the new rules that will address our $43-million-a-day leak to our southern neighbour? Unfortunately, the answer appears to be no. The new process appears to further increase uncertainty for future pipeline proponents and investors. At the symbolic level, the messaging is problematic. When you replace an agency named the National Energy Board (NEB) with a new agency named the Impact Assessment Agency (IAA), the message is clear: environmental impact is replacing economic benefit as Canada’s primary policy focus when it comes to new energy projects. - National Post

Alberta's Opposition leader says that if he becomes premier, there would be "serious consequences" for British Columbia if it blocks the Trans Mountain pipeline expansion. Jason Kenney said Monday he would be prepared to stop permits for the shipment of Alberta oil to B.C. through the existing Trans Mountain line, which runs from the Edmonton area to Metro Vancouver. "If British Columbia is unwilling to help us export Canadian energy, then I would ask: Why should the NDP government benefit from shipments from Alberta?" he asked during a media availability in Vancouver. "People are already paying $1.50 a litre for their gas here. Thousands of British Columbia drivers are going down to Bellingham and Washington state to fill up their gas tanks. That situation, unfortunately, would get a whole lot worse without Alberta oil." The United Conservative Party leader said he travelled to B.C. to speak about the need for "environmentally responsible resource development." He also said he would be prepared to slap a toll on B.C.'s natural gas shipments through Alberta. - CBC News

Alberta plans to align its Trans Mountain pipeline expansion legal efforts with those of the federal government, and provincial officials are heading to Ottawa this week to figure out how that can happen. The province’s market access task force held its second meeting Monday in Edmonton. It talked about possible retaliatory measures against British Columbia, how to win the hearts and minds of Canadians on the pipeline issue, and Alberta’s legal strategy. - Calgary Herald

B.C. doesn’t have to miss the next natural-gas boom — Mark Milke

One reason why the government of British Columbia is so vocal in its unconstitutional opposition to federally approved oil pipelines (see: approved Kinder Morgan expansion) is because the NDP is tied at the political hip to the Green Party in the legislature. That is the one where a razor-thin majority for the two parties exists with the Greens at three seats, the NDP at 41, with the opposition Liberals at 42 seats and one for an independent. The Greens oppose not only oil but also further natural-gas development and exports of the same, a position opposite that of the NDP government. Thus, in political calculations, B.C. Premier John Horgan more fiercely opposes oil to satisfy the Greens – that, and much of Mr. Horgan's own fervent anti-oil base and caucus. That's politics, and it is driving investment away from British Columbia. Nonetheless, the B.C. government's political calculation does contain the seed of possibility that natural-gas exports could flourish sooner than previously thought and provide a boom in employment and tax revenue to British Columbians. - Globe & Mail

The International Energy Agency says crude-by-rail shipments in Canada are expected to more than double over the next two years, as a lack of pipeline capacity forces producers to look to alternatives. By 2019, it is expected rail will transport up to 390,000 barrels of oil a day, with peaks of 590,000 barrels a day if producers don’t resort to crude storage in peak months. Assuming Enbridge Inc. successfully expands its Mainline pipeline system, rail shipments could return to 170,000 barrels a day in 2020, predicts the IEA. - The Toronto Star

Oil and gas company stocks helped drive Canada’s main stock index higher Monday as waning fears that a trade war would break out helped power Wall Street higher. The S&P/TSX composite index climbed 156.69 points to 15,541.21. Among the biggest gainers in the energy sector were Crew Energy Inc. and Baytex Energy Corp. up to 17.31% and 10.22% respectively, at the closing of markets. - The Toronto Star

The U.S. is likely to overtake Russia to become the world’s largest oil producer by 2023, accounting for most of the global growth in petroleum supplies, the IEA said Monday. U.S. crude production is expected to reach a record of 12.1 million barrels a day in 2023, up from 10.6 million a day this year, said the International Energy Agency, which advises governments and corporations on industry trends. American oil output will surge past Russia, currently the world’s largest crude producer at roughly 11 million barrels a day. The IEA’s closely watched five-year forecast showed the U.S. hitting new strides in its oil and natural-gas boom, helped by technological advances, improved efficiency and a fragile recovery in oil prices that is encouraging shale companies to ramp up their drilling. - The Wall Street Journal

Mark Papa, one of the pioneers of the U.S. shale boom, doesn’t buy into the message that America’s oil output will continue to surge, the WSJ’s Bradley Olson reports. Mr. Papa, the former Chief executive of industry at EOG Resources Inc. is eager to tell oil executives that the idea that shale-oil producers can quickly ramp up production and sustain those levels if needed is wrong. An example of the prevailing message on shale came Monday when the International Energy Agency forecast in a report that the U.S. will overtake Russia to become the world’s largest oil producer by 2023. Mr. Papa, an engineer by trade, pointed to a series of constraints including shortages of sand used to hydraulically fracture shale wells that may put a lid on output. “The oil market is in a state of misdirection now,’ said Mr. Papa, now head of smaller shale company Centennial Resource Development Inc., “Someone needs to speak out.” - The Wall Street Journal

Australia’s energy market is on the rebound — Josh Frydenberg

Australia’s energy market is on the rebound. A record wave of 6000 megawatts of new generation is coming online, putting downward pressure on prices. Alinta cut its power prices by around 3% in January and last week Powershop followed with a 5% cut worth $70 a year to customers. There are also positive signs in the spot and contract markets for gas, following the Prime Minister’s intervention late last year. An additional 70 petajoules of gas which would have otherwise gone offshore has made its way to the domestic market, with the ACCC reporting contract prices for large customers falling up to 50%. - Australian Financial Review