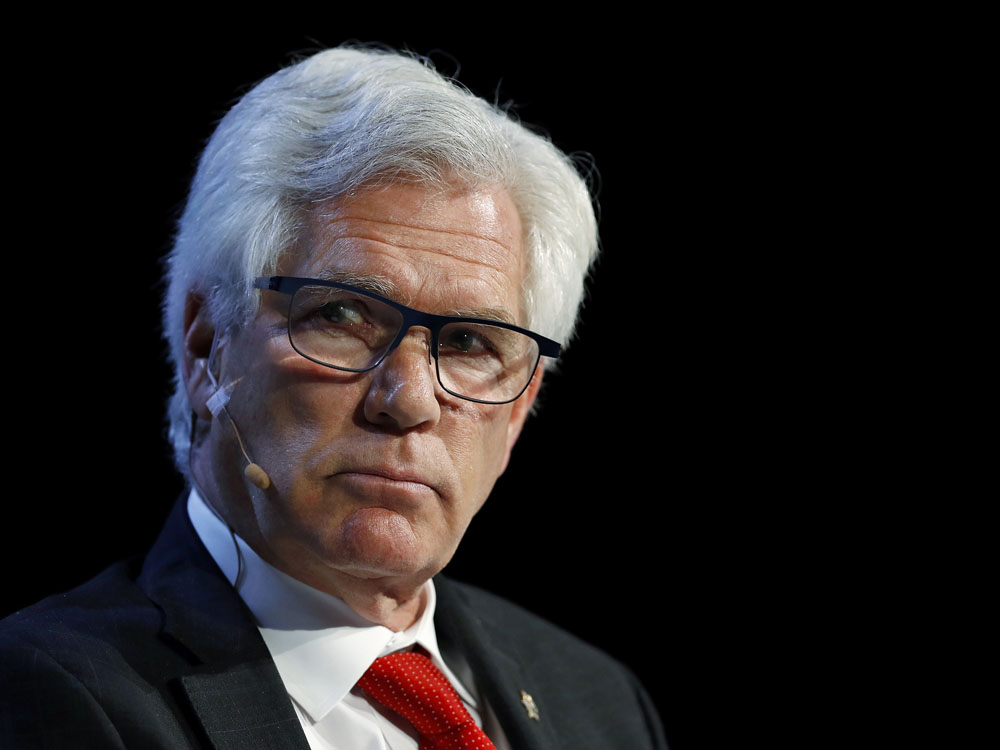 Investors and analysts have grilled both Canadian politicians and oil executives this week on pipeline projects, and Natural Resources Minister Jim Carr tried to soothe concerns over the issue Wednesday. “The government of British Columbia doesn’t like the pipeline much,” Natural Resources Minister Jim Carr said Wednesday, adding that “the government of Canada is as committed to the project as it was the day we approved it.” Pipeline constraints have been a theme for both Canadian and, to a lesser extent, Texan oil producers, at Houston’s CERA Week energy conference this year – a sharp contrast to last year, when Prime Minister Justin Trudeau attended and touted his government’s approval of new pipeline export projects. In Canada, all of the oil export pipelines are full and producers are increasingly shipping their barrels on railway cars given pipeline operators are rationing space on existing lines. The situation has caused the Canadian oil producers to accept discounts as high as $30 per barrel for their oil. - National Post

The chief executive of Kinder Morgan won't put a timeline on when construction will begin on the Trans Mountain expansion, a delayed project which would ship Alberta oil to British Columbia's coast. Instead, Steven Kean said the company has to be patient, although he's optimistic the project will proceed. "We're waiting. We're waiting to see how the permitting only strategy plays out. We're waiting to see how some of those decisions play out. We expect the judicial review will be favourable," he said. "I like the way a lot of that is lining up." - CBC News

Federal Finance Minister Bill Morneau stopped in Calgary on Wednesday as part of his post-budget tour, and while he never uttered those words, he didn’t have to – the underlying message was clear when it comes to hot-button issues affecting Alberta. Whether it’s building new pipelines, concerns about business competitiveness or falling oilpatch investment, the theme is pretty similar: don’t worry, Ottawa is working on it. The minister spoke to 200 people at a Calgary Chamber of Commerce breakfast and Morneau touched on the major items in last week’s budget, including investments in science and research, gender equality measures and managing the economy. - Calgary Herald

Alberta politicians are crossing swords over the best way to speak with a unified voice about the fractious Trans Mountain pipeline issue during the spring sitting of the legislature. Government house leader Brian Mason says the first order of business when the legislature resumes sitting will be an all-party debate on a motion backing Premier Rachel Notley's fight with British Columbia over the pipeline. - Winnipeg Free Press

Thousands of oil and gas jobs lost during the Alberta recession are gone for good, predicts ATB financial chief economist Todd Hirsch. Even if the price of oil surpasses $100 a barrel, Alberta's energy workforce will never return to pre-recession levels, Hirsch said. "I've learned as an economist to never say 'never,' but even if it were to come back, because of the use of better technology and innovation, the energy sector will not need as many people going forward." - CBC News

Homes and businesses that use natural gas in Nova Scotia can expect price hikes when the province's offshore supply dries up in the next two years, according to the region's pipeline company. Mike Whalen of Maritimes and Northeast Pipeline says there is plenty of cheap natural gas in Western Canada and the United States, as well as pipelines to get it here. But that cheaper gas will not offset the increased pipeline charges to move it into the region. "The big question is whether the local markets can bear this cost increase," Whalen told an energy conference Wednesday. "We know our supply is running out domestically. We know the table is set to bring gas north to us from the U.S. But will the markets be able to bear this increase?" That was the issue before an expert panel convened Wednesday by the Maritimes Energy Association in Halifax. The industry is grappling with what happens after the ExxonMobil-led Sable Project winds down by 2020. Encana's Deep Panuke field is also being decommissioned. - CBC News

Let me preface by saying that I believe the greenhouse effect is real. Therefore, I am for sensible policies that reduce global emissions. Sadly, carbon dioxide emissions taxes aren’t sensible if our goal is to reduce global emissions. They cost too much and do too little. So how did we go so wrong on carbon taxes? Carbon taxation was originally based on a right-wing, free-market theory. The simple idea, to paraphrase Milton Friedman, is that if you tax something, you get less of it. It could elegantly allow the markets to find the most efficient ways to reduce carbon without the need for government regulations. Many respectable conservative-minded people bought into this theory. Let’s look at the reality in practice. Theoretically, carbon prices are supposed to reduce regulation. However, in every jurisdiction where carbon pricing has been implemented, it doesn’t reduce regulation – it increases it. Carbon-pricing schemes in Europe, California and Canada are all very complicated. The Canadian government just recently introduced 500 new pages of legislation and regulation. Another example, the Alberta Climate Leadership Plan, has a carbon-tax-credit program. - National Post

Federal Environment and Climate Change Minister Catherine McKenna’s claim on Tuesday that Canada will meet its 2030 industrial greenhouse gas emission targets would have been more credible had she explained how. The Justin Trudeau government’s pledge to Canadians and to the international community, through the United Nations, is that Canada will reduce its greenhouse gas emissions linked to man-made climate change to 30% below 2005 levels by 2030. This 205 Mt annual reduction would require the equivalent of shutting down Canada’s transportation sector (173 Mt annually), plus 66% of our waste disposal sector (48 Mt annually). In December, McKenna reported to the UN that even if Ottawa implements its entire climate action plan, including projects envisioned but not yet begun, it will fall 66 Mt short of its 2030 goal. In assuring Canadians that the Trudeau government is committed “all in” to achieving its 2030 emission target, McKenna offered no specifics as to what additional measures to reduce emissions the Trudeau government is prepared to take. - Toronto Sun

President Trump’s intention to slap stiff tariffs on American firms that buy imported steel and aluminum is going to do more than raise the cost of doing business for U.S. manufacturers, increase prices for consumers, and put millions of American jobs at risk. It is also likely to undermine the shale revolution in oil and natural gas production, and in the process benefit OPEC and Russia. There is a terrible irony in Trump’s move to impose tariffs on American businesses. Throughout his first year in office, Trump promised to make the United States the dominant producer of oil and natural gas in the world. But his recommendation to impose tariffs on steel and aluminum ignores the reality that U.S. energy production will ultimately be a big loser from these destructive protectionist policies. - American Enterprise Institute

Besides energy export, the United States is willing to share its technology and innovation with other countries, U.S. Energy Secretary Rick Perry said on Wednesday in Houston, Texas. The United States wants to export its natural resources around the world, but perhaps more important and meaningful than that is its desire to export technology. Last year the U.S. became a net natural gas exporter, exporting Liquefied Natural Gas (LNG) to 27 nations on five continents, Perry said, adding that overall, U.S. energy exports in 2017 rose by 50% compared to 2016. Although the U.S. wants to see more exports of its natural resources, Perry said his country seeks to ensure the security of its energy as it is the roadmap to economic prosperity. - Global Times

Smaller energy retailers said the Turnbull government's National Energy Guarantee could entrench the power of big generators and retailers, warning major changes to the energy system could have "dire consequences" including higher prices. With the Energy Security Board under pressure to finalize the details of the NEG ahead of next month's Council of Australian Governments energy council meeting, companies and industry groups have submitted their ideas on the final model to be adopted as a replacement for the Finkel Review's Clean Energy Target. The chief executive of 10 retailers who represent 10% of the National Electricity Market – including ERM Power, 1st Energy, Covau, Locality Planning Energy, Energy Locals, Click Energy, Winconnect, Next Business Energy, Globird and Bluenrg – said while the transition to renewable energy was inevitable it would not be simple or cheap. - Australian Financial Review

With billions of dollars on the line and Russia's presidential election around the corner, two bitter enemies locked horns last week over heat-producing natural gas during a brutal cold spell in Europe. But the tense standoff between Ukraine and Russia also left Europeans on the edge of their seats, asking what's next when it comes to their future supply of the highly lucrative resource. Ukraine and Russia rely on each other to deliver gas to Europe. The Russians pump natural gas through pipelines in Ukraine and deliver it to Europe, but the deep-seated distrust that has turned into hatred between the two countries is causing chaos, and it isn't the first time. In 2009, a dispute between the two countries cut off natural gas supplies to Europe for 13 days in the dead of winter. While last week's episode wasn't as precarious, it could have important long-term consequences for all of Europe. - CBC News