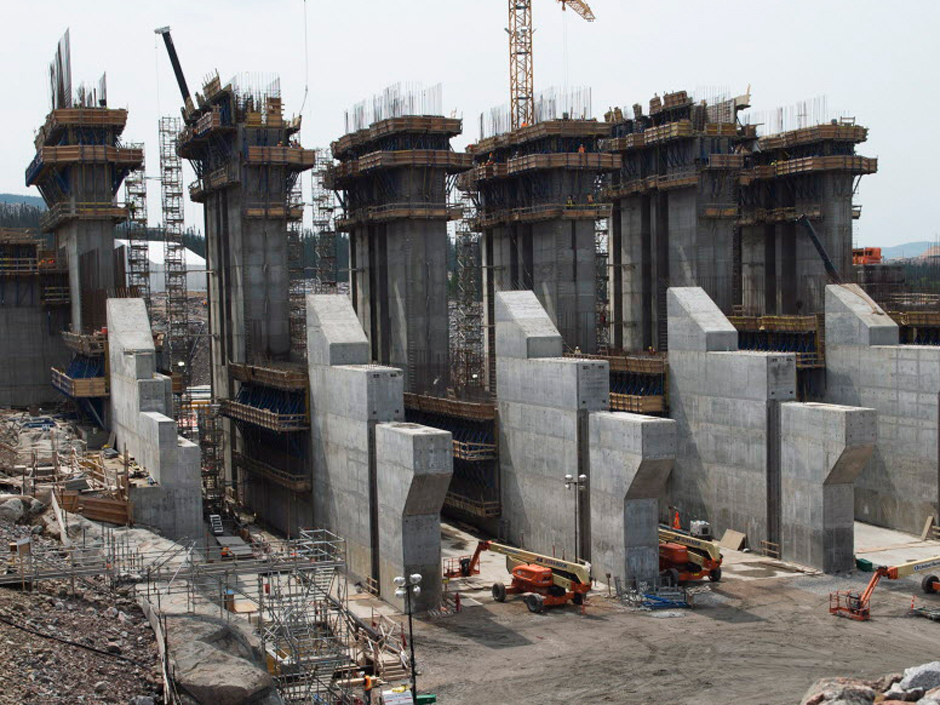 If you’re not skeptical about the true state of provincial finances, you should be. The official balance sheets of provinces across the country mask billions of dollars in debt related to a series of megaproject follies being pursued by provincial governments and government-owned power utilities. While their debt doesn’t officially appear on provincial balance sheets, taxpayers will be left footing the bill when the electricity rates needed to pay them off become so economically crippling and politically unpalatable that they will require a bailout. A chorus of auditors general and ratings agencies have questioned this trend of masking liabilities, but have seen their warnings ignored by political leaders determined to bury the risk of pet megaprojects. The most recent example of mixing electricity liabilities with taxpayer liabilities comes in Ontario. The province recently passed the Fair Hydro Act, which will see it issue as much as $26.2-billion in debt over the next decade to finance temporary rebates to electricity customers — all to mask the rate increases caused by a decade-long extravaganza of clean-energy spending. - National Post

For the world's sake, Canada should be last to phase out oil — Cody Battershill

In global petroleum markets, there's a pool of suppliers that includes Saudi Arabia, Iraq, Iran, United Arab Emirates, Kuwait and Nigeria. These are no paragons of virtue in the democracy, environmental transparency and human rights departments. The usual state of play in these jurisdictions is that programs to regulate carbon dioxide emissions fall well behind Canada's programs — and in many cases, programs to progress technological innovation to reduce emissions in the oil and gas sector are virtually non-existent as well. If Canada is prevented from supplying oil to the world, then other countries — often far less focused on human rights and the environment — will be happy to take our place. - The Huffington Post


Has Rachel Notley been thrown overboard by the Trudeau team? — Gillian Steward

Alberta Premier Rachel Notley will be in Toronto next week to try and convince any doubters of the benefits of the expansion of the TransMountain oil pipeline. Why you might ask is she touting the benefits of a pipeline that won’t run anywhere near Toronto or anywhere in Ontario? The $7.4-billion project would ship diluted bitumen from Alberta through British Columbia and eventually to the coast where it will be loaded on tankers bound for Asia. The project has already been approved by the National Energy Board and the Trudeau government. Who else does Notley need to convince? - Toronto Star

As of today, Ontario power companies are forbidden from disconnecting people who don't pay their bills. This new annual moratorium brought in by the Ontario Energy Board remains in place until April 30. "The bad thing is if people think this is just a free pass to not pay their hydro bill all winter long," says Wendy Watson, the communications director at Greater Sudbury Hydro. "The moratorium will end. Then instead of owing a hundred bucks, a couple hundred bucks, whatever their monthly amount will be, it's going to be dramatically more." There was a trial moratorium last winter between Feb. 24 and May 1. During that time, the debt being carried by the utility had grown by about $180,000, a cost, which she says, is spread out among the other electricity users. "Ultimately it affects the rates that all the other ratepayers have to pick it up then. And that doesn't seem fair." - CBC

Environment Minister Catherine McKenna says Canada is going full-steam ahead with its push for a global alliance to eliminate coal-fired electricity, and that she isn’t concerned the United States — with its pro-coal president — is trumpeting an opposite approach. McKenna, who is in Bonn, Germany for the 23rd annual United Nations climate change conference this week, told reporters by phone on Tuesday that Canada will work with countries and sub-national players like businesses and American states that “understand that we need to power past coal.” She played down the suggestion that Canada’s position would create friction with the U.S. as the countries get set to resume strained negotiations to change the North American Free Trade Agreement. - Toronto Star


Canada's enviro theories fly in the face of reality—Lorne Gunter

There are two energy worlds on display this week. There is the real one; the one full of production estimates and demand projections, investment reports and terms like “tight oil” and “upstream cost declines.” Then there is the unreal one playing out in Germany at the United Nations’ annual climate conference. It’s full of high-blown theories and magical solutions to over-hyped problems, plus calls for higher taxes and greater regulation backed by “green” politicians and bureaucrats. And guess which energy world Canada is far more active in? That’s right, the eco-fantasy world in which participants believe if they just tax us all enough and spend enough money on alternate-energy subsidies, they can magically transform our economies into equally prosperous ones in which none of us use carbon-based fuels and we all have jobs as smartphone app designers, pour-over coffee artists or bike-repair techs. - Toronto Sun

Of all the empty gestures in the pathetic history of global climate policy-making, few match the air-headedness of Canada’s intent — to be officially announced Thursday at the United Nations COP23 climate conference in Bonn — to lead a global campaign to rid the world of carbon-emitting coal. By any measure, Canada is a nobody in the coal business, ranking near the bottom of all global measures of the industry, worth less than one per cent of global production and consumption. Canada is a non-player, a zero, an insignificant speck on the great world coal market. But that isn’t stopping Environment Minister Catherine McKenna, donning her Climate Crusader Halloween outfit, from swooshing into COP23 to take on the world. At last report, McKenna had recruited Italy and the Netherlands to join her anti-coal crusade. Italy, the Netherlands and the United Kingdom are just like us: tiny players in coal, but big players in the greatest climate industry of all, political posturing. - National Post

Newfoundland and Labrador will target big spending in health, education and by the Crown corporation overseeing the bloated Muskrat Falls project as its deficit mounts. The province is now expecting a deficit of $852-million this fiscal year, up from $778-million predicted in last April's budget. Finance Minister Tom Osborne said Tuesday the increased shortfall is largely due to lower offshore oil royalties. They dropped $147-million from budget projections thanks to deflated prices and higher exchange rates. A Conference Board of Canada economist recently described overspending in the province as "a ticking time bomb." Still, Osborne said it's encouraging the governing Liberals are close to revenue projections and on target to cut costs. - CTV News

Coun. Russ Wyatt wants Winnipeg to create a new arm's-length corporation that will generate solar power and sell it back to Manitoba Hydro. The Transcona councillor has authored a motion to create a new non-profit entity to set up solar farms on city property, sell solar power and promote the benefits of green energy. Wyatt said the city can fund this new corporation using $200,000 in annual energy savings from the use of LED traffic lights. - CBC

Kinder Morgan has appealed again to the country's energy regulator, asking it to set up a process to resolve potential disagreements with provincial or municipal governments over its planned Trans Mountain oil pipeline expansion project. The request was made Tuesday after the National Energy Board last week rejected a proposal to expedite an earlier appeal to obtain permits from the city of Burnaby in B.C.'s Lower Mainland. - CBC


Why Alberta should commit to a Keystone XL contract — Andrew Leach

When news broke earlier this month that TransCanada was looking to the Alberta government to sign on to the Keystone XL pipeline as a long-term, contract shipper, my hope was that the province would do just that. Now, TransCanada has announced that it has sufficient commercial support to proceed with Keystone XL. There are good reasons why Alberta should have acted to secure space on the Keystone XL pipeline for shipping bitumen royalty in kind barrels and no compelling reasons not to take such action. I hope, when the list of shippers is released, that we see Alberta's Crown petroleum corporation among them. Pipelines offer priority access and lower-cost shipping to those with long-term, locked-in subscriptions called take-or-pay contracts (such as your newspaper subscription, where you pay whether you use it or not). By signing these contracts, pipeline companies hedge themselves against quantity risk as the contracted revenue will be enough to cover a reasonable rate of return on capital. - Globe & Mail

U.S. to dominate oil and gas markets ‘for decades to come’— Grant Smith

The U.S. will be a dominant force in global oil and gas markets for many years to come as the shale boom becomes the biggest supply surge in history, the International Energy Agency predicted. By 2025, the growth in American oil production will equal that achieved by Saudi Arabia at the height of its expansion, and increases in natural gas will surpass those of the former Soviet Union, the agency said in its annual World Energy Outlook. The boom will turn the U.S., still among the biggest oil importers, into a net exporter of fossil fuels. “The United States will be the undisputed leader of global oil and gas markets for decades to come,” IEA Executive Director Fatih Birol said Tuesday in an interview with Bloomberg television. “There’s big growth coming from shale oil, and as such there’ll be a big difference between the U.S. and other producers.” - Toronto Star

The International Energy Agency made headlines Monday when it declared in its World Energy Outlook 2017 that the U.S. could be a net exporter of oil within a decade. The IEA also projected that the U.S. is set to become the world’s dominant oil and gas production leader for decades. Is that a realistic assessment? Is the U.S. on the cusp of achieving energy independence for the first time in nearly 70 years? If the trends before 2014 had continued for five more years, and as long as U.S. demand remained relatively flat, then 2019 could have been the year energy independence was achieved. But the oil price collapse caused U.S. oil production to dip, and net imports trended slightly higher in 2016. U.S. oil production is once again on the rise, but demand is also climbing higher. My verdict on the IEA's projection? It is certainly possible but will likely require oil prices to rise from current levels. - Forbes

A new report by the Global Carbon Project, an international research consortium, predicts that carbon dioxide emissions from fossil fuels and industry will rise 2 per cent this year. The report was released at the UN climate change meeting in Bonn on Monday. The increase — which is largely caused by China and developing countries — suggests the world is straying further from the course set at the landmark UN conference in Paris two years ago. - Financial Times