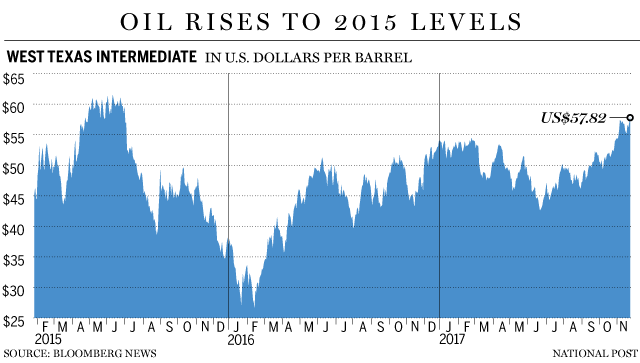 Crude oil prices are at a two-year high, but out-of-luck Canadian producers are missing out on the rebound. The West Texas Intermediate benchmark oil price rose again Thursday to US$58.25 per barrel, marking the second day that North American oil prices had traded over US$58 since the summer 2015. But the discount on Canadian oil has only worsened after TransCanada Corp. shutdown its Keystone mainline after an oil spill late last week, choking off a vital conduit connecting Alberta to American refineries. The pipeline, built 10 years ago, carries 590,000 barrels of oil per day from Alberta to an important hub in Oklahoma. - Calgary Herald

Oil prices climbed on Friday, with U.S. oil crude hitting a more than two-year high as North American markets tightened on the partial shutdown of a pipeline linking Canada with the United States. Trading activity was expected to be low on Friday due to the U.S. Thanksgiving holiday. PVM Oil Associates strategist Tamas Varga said the spill that shut the Keystone pipeline was helping U.S. crude, flipping prices into backwardation, when front-month prices rise above those for future months, indicating an undersupplied market. "January is now 4 cents more expensive than February, and I think we have not seen that for three years," he said. The pipeline spill on Nov. 16 reduced the usual 590,000 barrel-per-day flow to U.S. refineries, driving down inventories at the storage hub of Cushing, Oklahoma, traders said. Markets have also tightened globally due to output cuts since January by the Organization of the Petroleum Exporting Countries, Russia and several other producers. - Globe & Mail

It seems Canada weathered the oil collapse better than previously thought. Numbers recently published on Statistics Canada’s online database show that between 2014 and 2016, the nation’s economy generated $24 billion (US$19 billion) more output in nominal terms than first estimated, according to Bloomberg calculations. The agency’s fully revised data will be officially released on Dec. 1, along with a report on third quarter 2017 gross domestic product. In real terms — which adjust the numbers for inflation and are the more conventional marker of economic activity — the update shows Canada’s growth rate over the three-year period averaged 1.8%, compared with a previous estimate of 1.7%. The revisions may suggest to Bank of Canada policy makers there’s even less slack in the economy than currently assumed, which could have implications for interest rates. They also reveal an economy with a better mix of economic activity, since the changes were driven by greater-than-expected business investment, mainly construction-related. - National Post

Hydro One is seeking permission to use prepaid meters, a move critics say will only hurt low-income customers. In a lengthy proposal to the Ontario Energy Board regarding rate increases, Hydro One includes a pitch “to install prepayment meters, which require the customer to pay first before they get any electricity,” said New Democrat MPP Peter Tabuns (Toronto-Danforth). “Everywhere that prepayment meters have been used, they have hurt struggling families,” said Tabuns, his party’s energy critic, demanding the government ban them, as has happened in the United Kingdom. Hydro One executives and Energy Minister Glenn Thibeault insist the meters, if approved, would be optional. The energy board, Thibeault told reporters, is mandated to “have the ratepayers’ best interests in mind, and so we leave the decisions, when it comes to rate applications, to the OEB.” - Toronto Star

We’re suspicious of the Wynne government’s assurance that a proposal by privately-controlled Hydro One to install “pre-paid” electricity meters for people who are behind in their payments will be “voluntary.” Hydro One’s submission to the Ontario Energy Board, seeking regulatory approval for its “Collection Enhancements” plan, buried on page 2,038 of a 2,076-page document, doesn’t specify it will be voluntary. It argues the increasing number of customers in default because of the rising cost of electricity justifies installing pre-paid meters as a way of  “minimizing Hydro One Network’s financial risk.” Energy Minister Glenn Thibeault insisted Thursday Hydro One has assured him the program will be a voluntary method for its customers to control their electricity consumption and in any event may not be approved. This after New Democrat MPP Peter Tabuns said the plan is designed to target the poor. It’s not surprising Hydro One wants to minimize non-payment for its services. But the idea senior citizens living on fixed incomes could be forced into paying in advance for electricity after the Liberal government’s mismanagement drove electricity prices in Ontario to the highest level in the country, is both morally repugnant and indefensible. - Toronto Sun

If asked what the federal government is doing to cut carbon pollution, most Canadians would likely point to the policy they've heard the most about: carbon pricing. But there's another tool in the pan-Canadian framework on clean growth and climate change that will cut far more carbon pollution than federal carbon pricing, and you probably haven't heard of it. It's called the clean-fuel standard and, while still in the design phase, it aims to cut 30 million tonnes of CO2 a year by 2030. That's equal to taking more than seven million cars off the road, making it the biggest carbon-pollution-cutting policy the federal government has planned. The clean-fuel standard targets not only transportation fuels, such as gasoline and diesel, but also those used in buildings and industry, such as natural gas. It would require fuel suppliers to reduce the carbon intensity (the amount of carbon pollution released for every unit of fuel consumed) of their product, while offering flexibility in how they choose to do so. A gasoline provider could blend ethanol into their fuel to make it less carbon-intensive, for instance – something Canadian fuel providers already do. - Globe & Mail

The carbon tax is due to increase 50% in Alberta in the New Year, going from $20 per tonne of CO2, to $30. That will mean an extra 2 cents per litre at the gas station, and another 50 cents per GJ on your natural gas bill. The United Conservative Party says the hike on natural gas will mean the carbon tax will effectively be a 75% rate on your home heating bill. That number comes from the fact natural gas is currently hovering at around $2 per gigajoule, and a $1.51 tax is 75%. “It’s going to be more expensive for households who are already stretched,” UCP leader Jason Kenney says in a video posted to Twitter on Nov. 13. However, the carbon tax isn’t based on the price of gas, it is a flat rate. If the price of gas goes up or down, it will remain $1.51 until the government decides to increase it. - Global News

The Yukon government has effectively put the brakes on any oil and gas development in the territory, by halting the process by which exploration rights are granted in the Kandik and Eagle Plains basins in northern Yukon. Energy, Mines and Resources Minister Ranj Pillai announced the move on Thursday in the Legislative Assembly. "This process is now officially discontinued, and there will be no further public review of the submitted locations related to the fall 2016 request for postings," Pillai said. In fall of 2016, the government received 15 separate submissions — 13 for the Kandik basin, and 2 in the Eagle Plains basin. The interested parties are kept secret by the government, and it's possible that all 15 came from the same company. The government has scrapped those submissions. There were none received in 2017. - CBC News

A nuclear energy facility which tests reactor fuels and materials under extreme conditions has been restarted in the US. The Transient Reactor Test Facility (TREAT) at Idaho National Laboratory (INL) started operations in 1959 and conducted thousands of experiments until it was shut down and maintained in standby status since 1994. TREAT can produce sudden bursts of energy that are more than five times more powerful than a commercial power plant, allowing scientists to examine fuel performance. It is an important asset to increasing the safety and performance of current and future nuclear reactors as well as solving the challenge of building zero emission baseload power generation. Ed McGinnis, Principal Deputy Assistant Secretary for Nuclear Energy said: “The Department of Energy’s decision to restore transient testing capability at INL is part of our efforts to revitalise the nation’s nuclear energy capacity.” - Energy Live News

Offshore gas fields in southeast Australia hold less than a decade's worth of gas and opportunities for new production is limited, making it more important for the Victorian government to drop its ban on onshore gas, according to Resources Minister Matt Canavan. Senator Canavan's words came after a new study into gas off the south-east coast found that supply is expected to dip over the next five years before starting a more rapid decline. The outlook reduces the capacity of the gas industry to rapidly respond to spikes in peak winter demand. Senator Canavan used the study to step up pressure on the Victorian government to end its ban. He said the state government is "gambling with the future of Victorian manufacturing." - Australian Financial Review