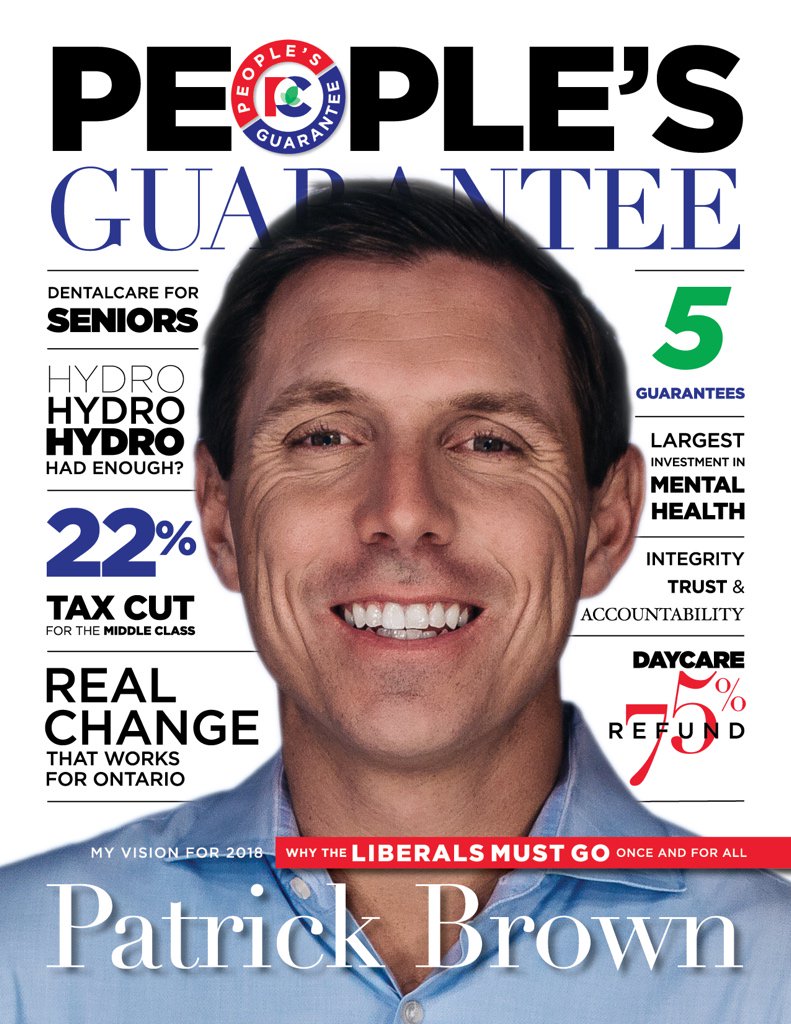 Ontario Progressive Conservative Leader Patrick Brown says if he's elected premier next spring he will introduce tax cuts for the middle class, a refund for childcare expenses and a further 12 per cent cut to hydro bills. Brown introduced the party's 2018 election platform – presented as a 78-page glossy magazine and called the "People's Guarantee" – at a policy convention in Toronto. The tax cuts, childcare refund and hydro cuts are part of five promises that make up the core of the Tory plan and also include a pledge to spend $1.9-billion over the next decade to create a mental health-care system. The Tories say they will cut hydro rates for the average household by 12 per cent, or $173 annually, through a number of measures which include returning the $350-million dividend from Hydro One to ratepayers. The Tories are also promising to end the Liberals' cap-and-trade program by July 1, 2019, and withdraw from the Western Climate Initiative. The party says it would instead opt into federal carbon pricing bench marks and return all proceeds of the program to taxpayers. - CTV News

Alberta Premier Rachel Notley took her pro-pipeline tour to the heart of the energy industry in Calgary where she urged business leaders not to let up on the message that Canada’s climate progress depends on pipeline progress. Speaking in front of the Calgary Chamber, Notley assured the audience that she has been delivering that message in person all week to audiences in Ontario in an effort to see progress on pipelines, especially with Kinder Morgan’s Trans Mountain project that faces resistance in British Columbia. “The time to speak up is now,” said Notley, calling on both business leaders and Albertans of all political stripes to get out and talk about climate action, pipeline safety, and the importance of the energy industry for the overall economy. - Global News

A new world record price for electricity set earlier this month signals a radical disruption in global energy markets – and Canada, whose econmy was once powered by some of the world's cheapest electricity, will not escape the effects. The new price, described by the news site Electrek as the cheapest electricity on the planet, was less than 2 cents per kilowatt hour, "part of a pattern marching to 1 cent per kWh bids that are coming in 2019 (or sooner)," the site declared. The record was not set in a place where energy is traditionally cheap. Nor is it from a traditional electricity source. The new low price of 1.7 cents per kilowatt was part of a contract between the Italian multinational ENEL Green Power and the Mexican government agency that administers the country's electricity wholesale market. It was just one of a series of low bids, including from Canadian Solar – the company founded by former Ontario Hydro engineer Shawn Qu – to make electricity from sunlight. - CBC News


Climate change can be an opportunity, not a cost, for businesses — Frank Appel

For any major global company, in our case as the world's leading logistics provider, the commitment to go emissions-free by 2050 tends to trigger one of two reactions. Some regard it as a public-relations ploy, while others think setting such a goal is overly optimistic. I think both reactions are wrong. Making such a commitment is simply inevitable. Climate change is a clear risk to the value of all companies anywhere. At the same time, the true potential to combat climate change will only be achieved once human ingenuity and the resource efficiency of the market are fully tapped. For that reason, business leaders increasingly understand that addressing the climate risk is not just a cost imposed on them. It is also an opportunity to drive value through new business models and investment in new technologies. The goal of COP 23, this year's UN climate-change conference – which wrapped up recently in Bonn, the German city where our company's global headquarters are located – was to become very specific on how to achieve a positive outcome for the environment. - Globe & Mail


'As precious as the resources:' Data science is oil industry's Next Big Thing — Claudia Cattaneo

From low oil prices to renewable energy competition, Canada’s oil and gas sector has seen plenty of difficult disruption in recent years, but it’s eagerly embracing the next big thing: data science. The availability of data is exploding and is enabling deep insight to make faster decisions and drive down production costs, making Canadian production more competitive with other sources, Judy Fairburn, chief digital officer at oilsands producer Cenovus Energy Inc., said Friday. “Data has become as precious to us as the resources we produce,” Fairburn told the Bennett Jones Lake Louise Business Forum. “Data is the new oil.” Over the past year companies have learned to use data to improve many aspects of their business, from drilling wells more efficiently to optimize the use of steam to produce oil from the oilsands. - National Post

A Quebec biofuels company has signed its first deal to power an airline's jets with energy grown from Canadian oilseeds. Agrisoma Biosciences Inc. of Gatineau will supply biofuel to Australia's Qantas Airways made from Carinata seed, a non-food, industrial type of mustard seed that produces oil suitable for aviation and diesel fuel. The partnership is the first of its kind in Australia and will see Agrisoma work with Australian farmers to grow Carinata. That will be complemented by seeds grown elsewhere to feed its global travel network. - National Observer

During President Trump’s visit to China, the U.S. signed US$250-billion worth of potential trade and investment deals that would boost American exports to China and Chinese investment in the United States. The two single largest potential deals were signed in the energy sector at the official U.S.-China Business Exchange, which took place on November 8 and 9 during President Trump’s visit. The agreements are just memorandums of understanding (MoU), not final contracts, but they set the stage for a stronger energy relationship between the two powerhouses of global energy production and consumption. West Virginia announced the plan of the world’s biggest energy corporation – China Energy Investment Corporation – to invest US$83.7-billion in shale gas development and chemical manufacturing projects in West Virginia. This was the largest pledged investment out of the US$250-billion potential deals that the U.S. signed in Beijing. - Oil Price

Deals struck by the "Big Three" energy retailers with the Victorian government to provide rebates to households on expensive standing electricity tariffs have raised hopes in the market that they may avoid a more onerous reregulation of retail prices. Victorian Premier Daniel Andrews announced on Sunday that more than 285,000 customers with Origin Energy, AGL Energy and EnergyAustralia on default deals or on expired market offers would see prices cut by up to 28% in 2018. Industry sources suggested that the agreements, which are expected to save some customers as much as $440 on their power bills next year, could improve the chances of the retailers escaping a reregulation of retail prices, as recommended by the Thwaites review in August. - Australian Financial Review