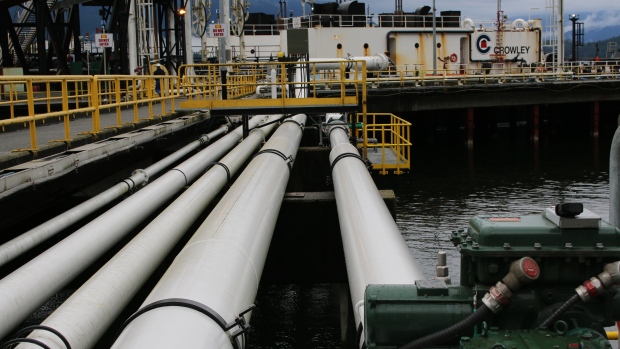 Alberta Premier Rachel Notley says her government will back Kinder Morgan in its appeal to the national energy regulator over permitting delays the company says it is facing from the British Columbia town located at the terminus of its planned Trans Mountain pipeline expansion. "One jurisdiction does not have the right to obstruct a project of national importance, which is why we will take every legal measure necessary to protect Alberta's interests and see this pipeline completed," Notley said in a statement Thursday. - CBC

B.C.’s NDP Government now has its own political decision to make with Site C — Conrad Yakabuski

British Columbia's former Liberal government made a political decision in moving ahead with the $10-billion (and counting) Site C hydroelectric project on the Peace River without first seeking an independent cost-benefit analysis from the province's utilities regulator. Now that the British Columbia Utilities Commission (BCUC) has finally delivered that analysis – albeit more than two years and $2-billion in sunk costs later – politics will again reign supreme as Premier John Horgan's newish New Democratic government weighs cancelling the megaproject. That's because the 187-page report the BCUC delivered to the government on Wednesday makes it clear the economic case for cancelling Site C is no longer a slam dunk. It would cost British Columbians at least another $1.8-billion to end the project on top of the cost of procuring the future electricity supply that would have partially been provided by the 1,100 megawatts Site C would generate. - Globe & Mail


'End of oil' narratives are misleading: global oil demand will remain at 90 million bpd till at least 2040 — Peter Tertzakian

Over the next few decades we’ll be plugging in more cars, hailing and sharing them, and reminiscing about the good ol’ days of the steering wheel. To be sure, these looming mobility changes are all exciting and impactful. But none of these nascent trends extrapolate easily into a narrative about “the end of oil,” a disruptive displacement of the fuel everyone loves to hate. Contrary to armchair calculus, more electric vehicle (EV) sales do not equate to the world using less oil anytime soon. In fact, whichever way you cut the spreadsheets, the numbers are pointing in the opposite direction. - Calgary Herald

Enbridge Inc. said Thursday that its Line 3 pipeline replacement program is progressing well, even as it faces intense scrutiny on the project in Minnesota. Chief executive Al Monaco said on a third-quarter earnings call that the company is making good progress on the line, with construction already under way in Canada and Wisconsin and the project expected to be finished in mid-2019. Regulators in Minnesota, however, continue to review the project and have issued several rulings with which the company disagrees. Last week, the Public Utilities Commission ruled Enbridge must publicly disclose its projections for potential oil spills on the line, including the probability of large spills at seven water crossings. The company had already submitted the data as part of an environmental impact statement, but had the information redacted from the public version over what it said were concerns that the data could be used by those looking to damage the line. - Globe & Mail

As energy lobby groups spar with governments over methane emissions, Canada’s largest oil and gas producer is touting its own methane reductions. “Since 2014, we have reduced our methane emissions in our conventional and thermal operations by 37%, well on our way to achieving the upcoming 45% methane emissions reduction target proposed in upcoming methane regulations,” Canadian Natural Resources Ltd. president Steve Laut said on an earnings call Thursday. Energy companies’ methane emissions have become a focal point in discussions with provincial and federal governments on climate regulations. Alberta’s NDP government is set to release a draft of its methane rules any day and the federal Liberals are in a consulting period over targets released in May. - National Post

Donald Trump as saviour not just of American democracy but global freedom? Although he doesn’t express it quite that strongly, this is one inevitable conclusion from Rupert Darwall’s tremendous new book, Green Tyranny: Exposing the Totalitarian Roots of the Climate Industrial Complex. That’s because Trump, by abandoning the Paris climate agreement, and reversing his predecessor’s attempts to bypass Congress on environmental matters, has heaved a mighty wrench into the European-based thrust to impose global bureaucratic “governance” under the pretext of saving the world from climate catastrophe. Beyond all the blather about Trump’s presidency representing the triumph of redneck ignorance and deplorable racism – and whatever Trump’s personal shortcomings – Darwall notes that one of the main reasons for his victory was that the American left had abandoned working people in pursuit of identity politics and radical environmentalism. - National Post

Canadian oil and gas infrastructure company Gibson Energy laid off staff across its Canadian operations on Thursday, according to a company spokeswoman who declined to provide exact numbers. Calgary-based Gibson Energy, which provides storage and transportation services for energy companies across North, has been hard hit by a prolonged slump in oil and gas prices. New chief executive Steve Spaulding took charge of the company in June and has been focused on cutting costs. "These are difficult decisions, but the move is part of a transition to a new organizational structure that will lay the foundation for long-term success," spokeswoman Amanda Condie said in an e-mail. In August, Gibson's largest shareholder, M&G Investment Management Ltd, released an open letter urging the company to launch a strategic review process to cut costs and boost returns. - Globe & Mail

Energy Secretary Rick Perry says he thinks using fossil fuels can help prevent sexual assault. Perry said Thursday that using fossil fuels to power electricity can help villages in Africa and other developing regions. He said during a recent visit to Africa, a young girl told him electricity was important to her because she has to read by the light of a fire with noxious fumes. Speaking at an event sponsored by Axios and NBC News, Perry said electricity also was important “from the standpoint of sexual assault. When the lights are on, when you have light that shines the righteousness, if you will, on those types of acts.” From the standpoint “of how you really affect people’s lives, fossil fuels ... play a role in that,” Perry said. “I happen to think it’s going to play a positive role.” - Toronto Star