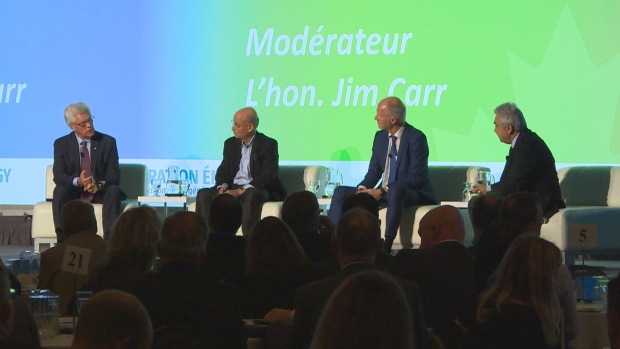 With the clock ticking on climate change and deadlines on emission reductions, Canada is being urged to invest more in clean energy as the world transitions away from a reliance on fossil fuel. Experts agree fossil fuels will have to be phased out in the next 30 to 50 years, making this an important and sometimes challenging time of transition, said Dr. Fatih Birol, executive director of the International Energy Agency, during the opening session. "It is not a black-and-white movie. We need renewable energies, solar, new technologies — but at the same time we need oil and gas for the next years to come in order to feed the cars, trucks, petrochemicals, aviation, in shipping across the world, which are more than 90 per cent run by oil." The Generation Energy conference is part of Natural Resources Minister Jim Carr's attempt to form a new national energy strategy. More than 600 participants will discuss Canada's path to affordable energy, energy governance and Canada's role in the global energy transition. This forum is part of an attempt to answer two questions, said Canada's Jim Carr: what will Canada's energy strategy look like in a generation and how do we get there? - CBC News

I helped plan Energy East, and I know the government's excuses are bunk­ — Dennis McConaghy

I was a senior officer of TransCanada Pipelines when the Energy East project was conceived and developed commercially, up to the mid-summer of 2014 when I retired. Two things are clear to me. One: the termination of the Energy East project is a major economic loss for Canada, removing an important option for providing market access for growing production from Canada’s oil sands resource, including direct access to eastern Canadian crude oil markets. Two: The Trudeau government should be stepping up to accept some real culpability for contributing to TransCanada’s decision to abandon the project, instead of resorting to various sophistries and distortions. The real lessons to be learned from the Energy East termination cannot be ignored if this country is to ever have a regulatory and public-policy regime conducive for private capital to take on the risks of major hydrocarbon infrastructure. - Financial Post

Premier Brad Wall told reporters Wednesday he is using strong language in regards to the cancelled Energy East project because, “I believe strongly in this pipeline.” Last week, TransCanada Corp. announced it was scrapping plans for the controversial $15.7-billion project that would have carried oil from the west to the east, largely by converting segments of a natural gas pipeline into one capable of carrying western crude. On Tuesday, Wall posted on Facebook that “national unity was at risk” and last week he likened the federal Liberal government to kidnappers holding the west hostage. - Regina Leader Post

The wind turbine that symbolized Ontario's push for green energy is at a standstill and won't be generating electricity until next month at the earliest, CBC News has learned. The turbine located at Exhibition Place was damaged in a storm in March, and it hasn't worked since.  The rainstorm caused water damage to the turbine's ring generator, said Tori Gass, media relations specialist for Toronto Hydro. The turbine is a joint venture of Toronto Hydro Energy Services Inc. and the WindShare Co-operative. "There were also high winds in this rainstorm ... and that's what allowed the rain to get into the generator area," Gass said Wednesday in an interview with CBC Toronto. "This is the first time it happened in the life of [the turbine], it's not a common occurrence." - CBC News

The Energy 202: Coal production is actually up under Trump. Should he get credit? — Dino Grandoni

President Trump made one big promise to voters when it came to energy policy: He would bring back coal-mining jobs and save the coal industry by lifting the regulatory burden foisted on it by the Obama administration. Energy and environmental policy analysts countered that it was not bureaucrats, but coal’s competitors, that were driving it out of business. The boom in electricity generated by cheap natural gas and renewable sources over the past decade was undermining old and cost-intensive coal-fired power plants. But new numbers published by the U.S. Energy Information Administration, an independent federal agency that monitors energy trends, shows that coal production has actually grown since Trump became commander-in-chief. During the first nine months of 2017 — coinciding more or less with Trump’s time in office — coal production was 12% higher than during the same period in 2016, according EIA data published Wednesday. - The Washington Post

The Turnbull government is considering extending its Direct Action climate scheme, including the $2.5 billion Emissions Reduction Fund, as an alternative to the now abandoned Finkel review's Clean Energy Target. With the Department of Environment and Energy's review of the federal government's climate policies due by the end of the year, energy experts said a revised Direct Action policy, which could include international carbon credits, was shaping as a possible replacement the Renewable Energy Target when it finishes in 2020. Prime Minister Malcolm Turnbull and Energy Minister Josh Frydenberg has already backed away from implementing the CET – the key recommendation of the landmark Finkel review – with concerns there will be no mechanism in place next decade to help Australia reach its emissions reduction targets of 26 to 28% below 2005 levels by 2030. - Australian Financial Review