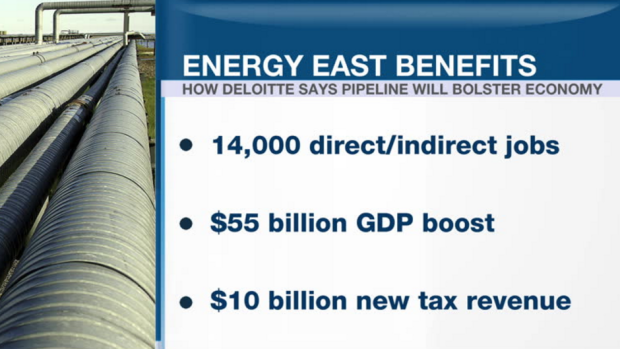 One sign Trudeau wants to use regulation to strangle Energy East: Joe Oliver

The National Energy Board (NEB) made a fateful decision by extravagantly widening the scope of its review of the Energy East pipeline project to include greenhouse gas (GHG) emissions from the combustion of the oil it will transport. The presumed rationale for calculating emissions from the end use of the product produced or transported is their potential impact on Canada’s climate change commitments. Contrary to criticism from some environmental groups and politicians, the NEB had a long and respected history as a highly competent and objective regulator. Unfortunately, it has just undermined its credibility, effectiveness and independence. -National Post

Hydro-Québec is pressing ahead with proposals to build several power corridors into the United States, part of the company’s efforts to broaden its exports into the region amid deepening environmental pushback against major infrastructure projects. On Friday the company submitted a proposal to the New York Power Authority to provide as much as 8.3 terawatt hours of emissions-free electricity to the region through new and existing transmission lines. The state recently announced it would accept bids for renewable energy projects totalling $1.5-billion as it looks to meet its climate targets. Hydro-Québec made a similar proposal to the states of New England in July, where it also plans to build new electricity lines. Canada’s largest utility provider has proposed four major power lines into the region, totalling several thousands megawatts of capacity, in a bid to snag a portion of a fast-growing market. - National Post

TransCanada gives customers an extra month to sign up for Keystone XL due to hurricane damages: Associated Press

TransCanada Corporation is giving customers an extra month to sign up for space on its Keystone pipeline system due to flooding from hurricane Harvey in Houston and other parts of the U.S. Gulf Coast. The company launched its open season in July to solicit binding commitments for transportation of an additional 225,000 barrels of crude oil per day on the Keystone and Keystone XL pipelines from Alberta to the market hub in Oklahoma, and on to the U.S. Gulf Coast. The deadline has now been extended to Oct. 26 from the original Sept. 28 "due to the historic flooding and catastrophic impacts to Houston and parts of the U.S. Gulf Coast," the company said in a statement. - CBC News

No energy for electric cars from government staffers: Antonella Artuso

Not only is the Ontario government failing to convince regular folks to purchase an electric vehicle, it can’t even get its own staff to buy in. According to figures obtained by the Toronto Sun through a Freedom of Information request, a mere 4.16% of the Ontario Public Service (OPS) passenger vehicle fleet is electric, mostly hybrids. The number of electric vehicles on the road overall is just 14,005 registered in Ontario. In 2009, the Dalton McGuinty government launched a bold plan to have one in every 20 passengers vehicles on the road electric by 2020. And it planned to set the example with an even more ambitious target for the OPS. Eight years later, and with less than three years to go until the self-imposed deadline, they’re not even in sight of the finish line. - Toronto Sun

Here are some questions for Canada’s political leaders. If Prime Minister Justin Trudeau and premiers like Ontario's Kathleen Wynne and Alberta's Rachel Notley believe humanity faces an imminent, existential threat from man-made climate change, what does that have to do with increasing government revenues? If their goal is to reduce industrial greenhouse gas emissions, why is their solution making Canadians poorer through a carbon tax, or cap and trade, a carbon tax by another name? What makes them think they know how to lower emissions by picking economic winners and losers through huge public subsidies to big business? Subsidies funded by the billions of dollars their carbon pricing schemes are now extracting from Canadians? Finally, since they’re imposing carbon pricing, why don’t they do it in the most honest, transparent and effective way, called carbon fee and dividend? - Toronto Sun

Hurricane Irma knocked out power to about 5.8 million homes and businesses in Florida, even as the storm's power waned as it crept up the state's west coast, according to state officials and local electric utilities. Most of the power losses were in Florida, but losses in Georgia, which were at about 90,000 as of 6 a.m. ET, were expected to increase as the storm moved north. FPL, the biggest power company in Florida, said more than 3.6 million of its customers were without power by 6 a.m. A total of 4.2 million have been affected, with about 570,000 seeing service restored, mostly by automated devices. - Business Insider

British energy company BP on Monday filed for an initial public offering of its U.S. pipeline assets. BP Midstream Partners LP, the master limited partnership (MLP) formed by BP's U.S. pipeline unit, said in a regulatory filing it plans to list on the New York Stock Exchange under the symbol "BPMP." An MLP is a tax-advantaged structure often used by pipeline and other capital intensive companies. They do not pay corporate income tax on distributions, or earnings, to partners. The offering comes nearly two months after BP laid out plans to spin off some of its U.S. Midwest and Gulf Coast pipeline assets in an IPO to raise cash. The IPO revives a plan first broached internally about five years ago before slumping crude oil prices caused BP to put the idea on hold, a source told Reuters in July. - Globe & Mail

The Turnbull government is under renewed pressure from some conservative MPs to use the $5-billion Northern Australia Infrastructure Facility to help bankroll either a new coal-fired power plant or upgrade existing coal-fired power stations in the country's far north. Amid a growing sense of frustration about the slow pace of decision making by the NAIF board to start allocating funds, some Coalition MPs are hoping the Turnbull government's revised climate change mechanism would allow the $5-billion fund to help pay for some coal projects. - Australian Financial Review