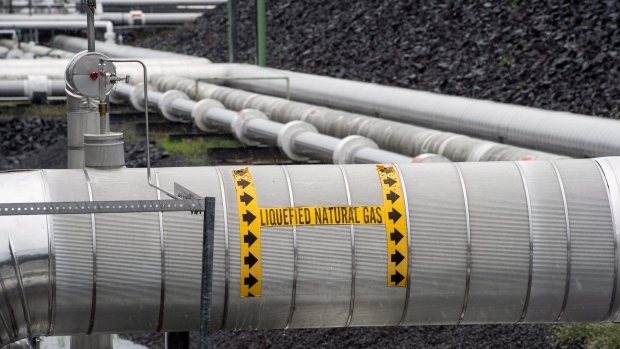 Aurora LNG has backed out of a plan with Calgary-based Nexen to build a Liquefied Natural Gas plant in northwestern B.C., saying the current economy doesn't support its vision for a large operation on Digby Island. It's another blow to the LNG industry that former premier Christy Clark promised would bring riches to B.C. during her provincial election campaign in 2013. Of the 19 projects listed in April 2017 on the government's LNG site, this project was one of only three which seemed to be moving forward. - CBC

The benchmark North American oil futures contract moved above $50 U.S. a barrel on Thursday, buoyed by predictions of growing demand worldwide. It's the first time since the beginning of August that West Texas Intermediate (WTI) crude has traded above $50. It hit $50.30 a barrel at midday in New York, before sinking back to $49.89 at the close, a rise of 59 cents. Brent crude, the main international contract, rose to $55.80 US a barrel. A report from the U.S. Energy Information Administration released Thursday has projected world energy consumption will grow by 28% to 2040. - CBC

Oil's at US$50 and that's a signal to U.S. shale producers to fire up their rigs: John Kemp

Forward U.S. oil prices for 2018 have climbed back above US$50 per barrel, a level that should be high enough to stabilize drilling activity over the next two months. But if prices continue their current upward trend, shale firms will almost certainly interpret that as a sign to increase output and begin ramping up their drilling programs again. Shale drilling has proved very sensitive to changes in the value of West Texas Intermediate (WTI) crude, especially the forward prices shale firms rely on to hedge production and reduce their risks. Between February 2016 and January 2017, the progressive increase in forward prices encouraged shale producers to boost output by hiring extra drilling rigs. The number of rigs drilling for oil, which had been falling during the industry slump, started to increase again from May 2016, and oil output began to rise from October 2016.- National Post

As foreign companies pack up their bags to leave the Canadian oilsands, there’s a notion the sector will soon enter a no-growth era. Increasingly, that appears to be more myth than reality. Two new reports this week illustrate the world needs more oil and Canada is expected to crank up production in the years to come. On Thursday, the U.S. Energy Information Administration (EIA) released its annual global energy outlook, projecting Canada will boost its production by 1.3 million barrels per day by 2040. This increase will come “mainly from oilsands production, with small additions from tight and non-tight resources” it said. And in the shorter term, Canadian output will climb by about 300,000 barrels per day this year, before adding another 200,000 bpd in 2018, the Paris-based International Energy Agency said in a separate report Wednesday. It predicts Canada will produce almost five million barrels per day sometime next year, a number that’s more aggressive than projections from the Canadian Association of Petroleum Producers, which expects the country will reach that threshold in 2029. - Calgary Herald

Kinder Morgan hasn’t yet proven that it can safely manage construction on its Trans Mountain Pipeline Expansion Project, said a pre-construction audit released by the National Energy Board (NEB) on Thursday. The audit evaluated the project’s ability to prevent incidents and ensure worker safety. Eleven out of 36 items examined in the audit were found to be non-compliant. “The NEB will monitor Trans Mountain’s implementation of the CAP, and verify the effectiveness of the company’s management system through targeted compliance verification activities as a part of its ongoing regulatory oversight of the project,” read a release from the NEB. The audit saw the NEB spend two months carrying out document and on-site activities review. - Global News

Is The Sun Setting On The Solar Boom?: Nick Cunningham

The U.S. solar industry is expected to see its expansion significantly curtailed this year after installing record capacity in 2016, marking the first annual decline in installations for the industry. A new report from GTM Research and the Solar Energy Industries Association (SEIA) raises some question marks for the trajectory of the solar industry. The report laid out a few reasons for concern. Residential PV only expanded by 1% quarter-on-quarter, the result of “weakness in the California market and a slowdown in Northeast markets, which are feeling the impact of pull-back from national providers.” Solar’s super-charged growth in recent years can in part be attributed to state policies that mandate renewable energy. Those policies are reaching their limits, meaning that going forward, a lot of new installations will need to be made on a voluntary basis. - Oil Price

Australia faces another electricity supply squeeze towards the end of the year, with wholesale power prices already soaring in the latest sign that the country’s creaking power infrastructure is struggling to keep up with peak summer demand. In the latest red flag that the country’s upcoming hot season could see a repeat of last year’s supply shortages, wholesale power prices have shot nearly a third above their current level. “If prices are already so high without the presence of a heatwave or an unexpected power plant shutdown, that indicates a supply squeeze is already being priced in,” said one Australian power trader, declining to be named as he was not authorized to speak about market trends. “Once consumption soars amid a real heatwave, production will struggle to keep up,” the trader said. “We could see a repeat of last summer: prices spike and the lights go off.” - Reuters