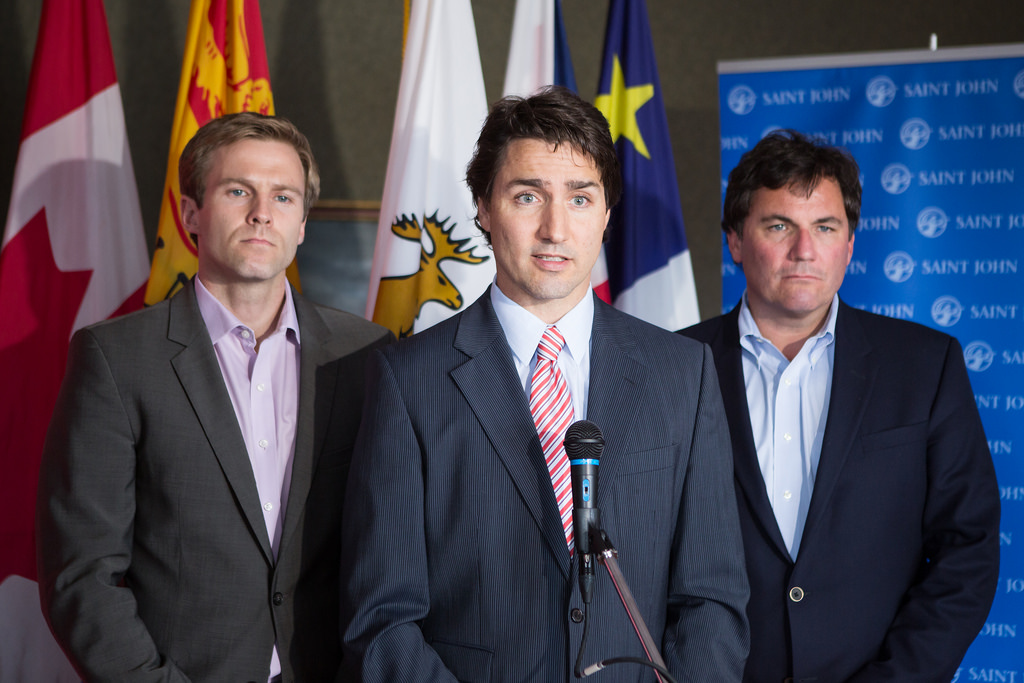 Saint John industry leaders gathered at the Delta Brunswick Hotel Tuesday to hear a keynote speech from Premier Brian Gallant, with one topic on everyone's mind: the proposed Energy East pipeline. "For those of you who would like to see the Energy East pipeline constructed from Alberta to Saint John, it's bad news," said Gallant to a crowd of about 70 on Tuesday for the Saint John Region Chamber of Commerce's distinguished speaker series. "And I fall in that camp. I fall in that camp because the Energy East pipeline would bring immense job opportunity and economic growth to New Brunswick and to Canada. We're going to do everything that we can to try and provide the project but we're not going to sugarcoat it, it's at a bad spot right now." While some have criticized the province for highlighting the project's construction job growth and not its sustainable growth, Gallant confirmed Tuesday the pipeline would create 3,000 jobs over the next decade — not just during the construction phase. -  The Telegraph Journal

National Steel Car Ltd., a railroad freight car manufacturing company based in Hamilton, ON., has launched a constitutional challenge against the Ontario government. The challenge concern’s Ontario Energy’s global adjustment fees, which are estimated to have cost the province’s electricity customers $37-billion in less than a decade. The global adjustment fee, which is used to cover the difference between the province’s market price for power and the price guaranteed to hydroelectric, natural gas, nuclear, solar, and wind generators through their regulated payments or contracts with the government, should be declared “an unconstitutional tax, not a valid regulatory charge,” argues National Steel Car. The company also argues that this tax is not lawful because no referendum was held before it was introduced. Jerome Morse of More Shannon LLP, who is representing the company, stated that the company is pursuing the claim because “they want to stay in business.” - The Financial Post

New data from the 2016 census revealed that overall Canadian incomes have jumped, but Ontario’s economy has declined. The explanation for this decline is simple: the Ontario government has been waging a war against the province’s economy. The cost of electricity in Ontario is among the highest in North America, and has increased by nearly 150% since 2006. This has also led to an exodus of manufacturing jobs, including the shutting down of Procter and Gamble’s Brockville plant and Central Wire Industries. However, instead of listening to Ontarians, Premier Kathleen Wynne is pursuing policies that further hurt the manufacturing sector, like the cap and trade carbon tax, and a dramatic jump in minimum wage. - Huffington Post

According to a new study published by Wood Mackenzie, liquid natural gas will be the biggest producer of carbon emissions for the world’s top oil and gas companies. This is due to the energy-intensive process of converting natural gas to LNG by cooling it to minus 160 degrees. Due to LNG’s growing popularity as a clean energy source, emissions resulting from LNG production are forecast to grow by 43% over the next 8 years, compared with a 22% increase in supply, “representing the largest absolute increase in emissions.” - The Financial Post

The B.C. Utilities Commission is telling BC Hydro it needs a lot more answers to complete its review of the Site C dam. BC Hydro says it has already spent $1.8-billion on construction for the hydroelectric dam planned for the Peace River, but Premier John Horgan's NDP government asked the commission to review the economic viability of the project after taking office. Money seems to be the biggest point of contention in the report, which says there wasn't enough information to tell whether the hydroelectric dam is on track to meet its $8.3-billion budget, or what the cost would be to put the project on hold. - CBC

The Alberta Balancing Pool has decided to terminate two power agreements that should help save consumers about $500-million, although the move is also expected to push up electricity prices in the next two years. The government agency announced Monday it will cancel two power purchase arrangements (PPAs) for units at the Sundance coal-fired generating plant, which is owned by Calgary-based TransAlta Corp. Monday’s announcement means the Balancing Pool has officially given six-months notice to end the contracts, a move it estimates will save consumers $475-million to $518-million in projected losses. - Edmonton Journal

Alberta could use a 20-year-old Supreme Court reference on Quebec succession to try to remove non-renewable natural resource revenues from the equalization formula, according to Jason Kenney, a contender in the race to lead Alberta's new United Conservative Party. The legal case could be used if Ottawa continues its "attacks on our energy industry," he said Wednesday evening. Mr. Kenney said under his leadership, the province would act if the federal Liberals have moved forward with the plan to implement a country-wide price on carbon and if Ottawa refuses to roll back what he calls the National Energy Board's "outrageous expansion of its mandate" in considering indirect greenhouse gas emissions in its assessment of the $15.7-billion Energy East project. He said he would use a provincial referendum to force Ottawa's hand if the federal government refuses to fundamentally change the equalization formula. The program is up for review in 2019. - The Globe & Mail

As speculation swirled over the White House's position on the landmark Paris climate agreement this week, a trio of determined governors had a few messages for the president. "There's nothing Donald Trump can do in our states to stop us from advancing our policies," said Washington Gov. Jay Inslee. "We are on track to meet the Paris accord," said California Gov. Jerry Brown. "This is America speaking." To the chorus, New York Gov. Andrew Cuomo added: "You don't get great going backward." Accompanied by former Secretary of State John Kerry, who steered the U.S. negotiations on Paris, the governors unveiled a new report on Wednesday from the U.S. Climate Alliance, the group they formed after President Trump announced he would withdraw from the historic climate agreement. - Climate News

While the price of battery storage units has not dropped in Australia as quickly as expected, it hasn't stopped the rapid uptake of the new technology as households and businesses attempt to cut their large power bills. A new report by solar consultancy SunWiz released on Wednesday found more than 7000 home battery systems (with a total capacity of 55 megawatts) were installed in Australia in the first half of this year — a figure that is expected to more than double in the second half of the year to a total of 17,500. The forecasts for next year are even brighter with growth forecasts of up to 250%. NSW is the number one battery hot spot in the country, with 21 % of installations this year alone, followed closely by Queensland (18%) and Victoria (12%). - Australian Financial Review