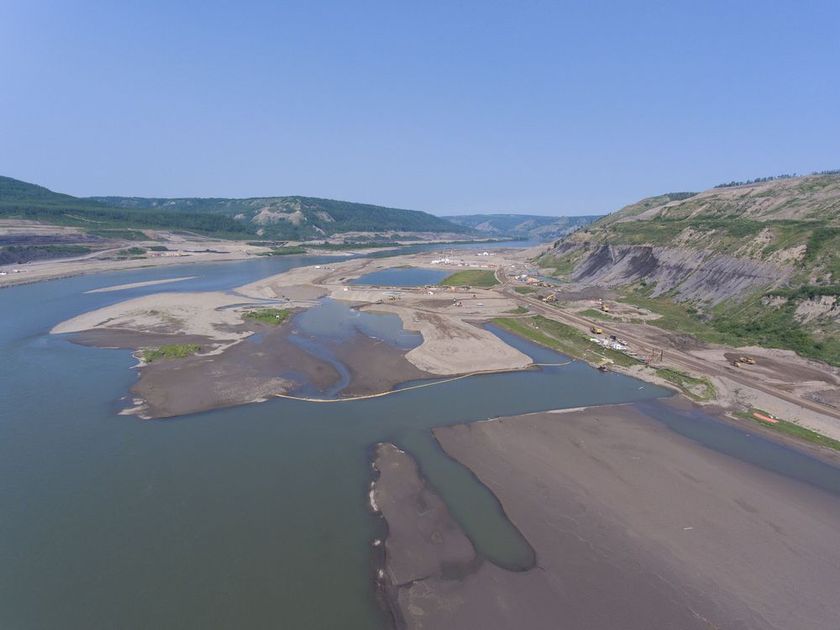 B.C. Hydro was 9% cent over budget and already dipping into contingency funds from day one on the main construction contract at Site C, according to the uncensored version of a report to the B.C. Utilities Commission. The troubles continue to the present day, with the $1.8-billion main civil works contract having run through three quarters of its contingency budget with only one quarter of the work being done. - Vancouver Sun

Canada's energy regulator has ordered Kinder Morgan Canada Ltd to stop some work on its Trans Mountain pipeline expansion, after a blog post showed it had been conducting activities that had "not yet been approved." In a letter sent on Friday, the National Energy Board (NEB) said Kinder Morgan has started work along the pipeline portion of the project, which the company is not yet allowed to do, and that it must stop. The letter was filed to the NEB's website. "We will be responding to the NEB's correspondence and are finding the best path forward," Kinder Morgan spokeswoman Ali Hounsell said. The $7.4-billion project, which would twin the current Trans Mountain pipeline, faces opposition from environmental and aboriginal groups and the provincial government of British Columbia, through which the pipeline passes. - Globe & Mail

Wang Xinping, the Chinese consul general in Calgary, recently shared four words at a conference in Banff that should make every taxpayer in Canada sit back and think. Before the consul general was asked a question, a moderator put forward the idea of Canada developing its vast natural gas resources in British Columbia and shipping it to China, ultimately allowing China to replace its coal power plants with cleaner burning natural gas. When asked if China might be open to that idea, the consul general replied, “the answer is yes.” Ironically, by keeping British Columbia’s abundance of natural gas in the ground, the Canadian government is, indirectly, keeping Chinese coal plants operational and contributing to higher global carbon dioxide emissions. Now think about this issue from a taxpayer perspective. Canadian governments, under the leadership of Prime Minister Trudeau at the federal level, routinely tell us that carbon taxes are the solution to reducing our carbon dioxide emissions. Yet in the aforementioned example, no carbon tax is needed to reduce global carbon dioxide emissions. - Financial Post

If the 'end of oil' is upon us, why's demand for crude rising at near-record pace? — Peter Tertzakian

Oil and gas plus conventional vehicle sales adds up to more than US$5-trillion per year of business. That’s a big tree to shake. - Financial Post

Hinton, west of Edmonton on the edge of the Rocky Mountains, is teaming up with academic researchers and the private sector to install what may be Canada's first geothermal heating system in its downtown core. The town and Calgary-based Epoch Energy propose to re-open an abandoned gas well near the community and use heat from the bottom of the hole to warm municipal buildings. Water five kilometres down simmers at 120 C. It would be pumped topside and used to warm another fluid, which would be piped downtown to the networked buildings. - CBC

Marine Atlantic’s terminal building has achieved LEED silver certification from the Canada Green Building Council. The certification indicates the North Sydney facility is a leader in environment and energy design. The designation demonstrates the building has achieved high performance in key areas of human and environment health including sustainable site. “Marine Atlantic is very pleased with this accomplishment and meeting high environmental standards of LEED certification,” said Kris Parsons, chair of Marine Atlantic’s board of directors, in a news release. “By implementing a number of environmentally friendly and energy efficient strategies, we are demonstrating that additional planning and design work can mean a big difference for the environment.” - Cape Breton Post

Renewable energy is good, but not perfect — Silvestre Reyes

No issue is immune from partisan politics anymore, including how this nation produces electricity. For example, the environmental movement, and the wind and solar industries, were critical of a new report from the Department of Energy. This is because it asserted that subsidies for those industries are partly to blame for the early closures of what should be profitable coal and nuclear power plants. I understand the concerns of the environmentalists, especially since the abundance of cheap natural gas is a major driver of the closure of older power plants; not just Obama-era policies that favor wind and solar. - The Hill

Australia's conservative government held back from imposing curbs on exports of liquefied natural gas after producers including Royal Dutch Shell PLC agreed to put more gas into the domestic market to ease energy shortages on the east coast. The decision, which followed a meeting between Prime Minister Malcolm Turnbull and energy companies, came just days after an Australian regulator warned that gas shortages in 2018 could be three times worse than previously thought. Experts had warned that the curbs risked damaging the country's standing as a destination for investment, while having a limited impact on local gas supply and prices. - Fox Business

Oil at $60 barrel? Possible, but not for long, analysts say — Bloomberg

OPEC and Russia are cutting output deeper than ever, demand is surprisingly strong and the threat of Middle East disruption looms again. Global prices have jumped more than 20% since June, with Brent hitting a two-year high on Monday. Yet the $60s are more likely to be a limit than a launchpad. Growing revenues could weaken the Organization of Petroleum Exporting Countries’ commitment to its supply deal, which many forecasters still say must be extended. U.S. shale oil production is already growing rapidly, and higher prices could prompt another surge in drilling. - Calgary Herald