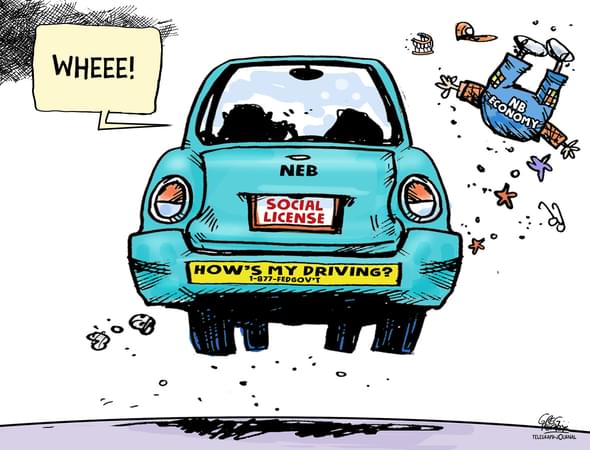 Ottawa has committed to fund the study of greenhouse gas emissions for the proposed, but now fledgling, Energy East pipeline — setting aside $5.4 million in a fund to cover the review. Given the federal government’s bungling of this critical development, covering the review expenditure is too little, too late. But the matter of cost is really not the issue. Rather, it’s the National Energy Board's changed assessment criteria that will likely doom the project. The problem isn’t just that the regulator is unfairly moving the goalposts at this late stage. The new assessment criteria will not tell us anything new about Energy East's economic advantage. Everyone already knows this project is big and irreplaceable. Rather, the new criteria are about trying to satisfy every possible political constituency with an opinion on the pipeline. Hence the federal government’s shift from cost-benefit and safety analysis to the more nebulous “social license.” Rather than opening its chequebook, Ottawa should reverse the damage it caused by signalling to the NEB to broaden its regulatory review. We need to return to a fair judgment criteria — one that will hold TransCanada to firm account on any environmental risks confined to the construction of the pipeline or the safe transport of crude, but does not make the consultation process a show trial for energy development. - Telegraph Journal

The Federal Court of Appeal has ruled against Kinder Morgan Canada and the federal government in relation to the existing Trans Mountain Pipeline. Tuesday's ruling states the federal government failed in its legal obligation to act in the best interests of the Coldwater Indian Band when it neglected to modernize the terms of a 1952 decision that allowed Kinder Morgan to use Coldwater's reserve for the pipeline. Coldwater Indian Band, which is located about 12 kilometres south of Merritt, B.C., has about 860 members, half of which live on the reserve. - CBC

A recent surge in oil prices will boost the bottom line of Canadian oil and gas producers but remains well below the minimum level needed to encourage increased investments in the oilsands or conventional oil and gas, energy analysts say. U.S. benchmark West Texas Intermediate crude prices recovered Wednesday to US$52.14 per barrel after sliding Tuesday but stopped short of the five-month-high close of US$52.22 per barrel on Monday, which was up more than 20% from lows in June. - Calgary Herald

NB Power wants to buy smart meters, but at what cost? — John Chilibeck

NB Power plans on buying hundreds of thousands of new smart meters, devices that could allow the public utility to charge people a different electrical rate depending on the time of day and season they use the service. NB Power spokesman Marc Belliveau told Brunswick News on Tuesday the utility plans on testing 1,000 smart meters first before buying thousands more. Belliveau declined to say how much it would cost to supply NB Power’s more than 400,000 customers with smart meters, offering that it would be all part of the scheduled upcoming rate hearing that would apply to residential and business customers. - Telegraph Journal

B.C. Hydro confirms about 200 workers at the Site C dam construction project in northeastern British Columbia have been laid off by the consortium that holds the main civil works contract. A statement issued by B.C. Hydro says that while such fluctuations are normal in a construction project, it believes work can continue into early winter and has asked the partnership group to reconsider its decision. - Vancouver Sun

Quebec Premier Philippe Couillard announced the opening of a cement factory in eastern Quebec on Monday. This announcement has outraged some as it was made almost simultaneously with another announcement from the Quebec government: that they would be spending millions of dollars on other projects to reduce heat-trapping greenhouse gas emissions. Many are outraged that the Premier would open a factory with such a huge carbon footprint, arguing that he might not be fully committed to his province’s goal of reducing greenhouse gas emissions by 20% by 2020 compared to its 1990 levels. - The National Observer

California Governor Jerry Brown has expressed an interest in barring the sale of vehicles powered by internal-combustion engines. Brown believes that California should be ahead of the game in reducing internal-combustion engine production, and not behind countries like China. If something like this were implemented it would cause the auto industry to take a huge hit — more than 2 million new passenger vehicles were registered in the state last year, topping France, Italy and Spain. The Association of Global Automakers said consumers must be able to afford the cleaner cars that California says are needed to meet its climate goals. - The National Post

Hurricanes Harvey and Irma killed dozens of Americans and caused tens of billions of dollars in property damage. But there’s one silver lining. The storms taught us invaluable lessons about the U.S. energy market. We need more refineries scattered around the country. Harvey decimated the Gulf Coast, which accounts for about 55% of overall U.S. refining capacity. MarketWatch notes that three refineries were idled while 11 were trying to return to full operations. Federal regulations have made it harder and more expensive to build new refineries, which are needed more than ever to handle the fracking boom's expanded oil and natural gas production. Many refining companies have simply settled for expanding and modernizing their existing plants, rather than building new ones. The hurricanes have undoubtedly been devastating, but they proved that the energy sector is strong and getting stronger. - The Hill

A forecast sharp drop in gas output in the Bass Strait opens up a 25% gap in local gas supply for the southern states next year and has underscored the risk of price hikes for Victorian manufacturers as they become increasingly reliant on Queensland. The revelation of the extent of the shortfall in the country's manufacturing heartland looks set to intensify pressure on Victorian Premier Daniel Andrews to relax the state's blanket ban on onshore gas, which the federal government has blamed for driving up gas prices. It comes as Origin Energy reported a new gas sale deal to supply tissue maker Kimberly-Clark in South Australia, which is understood to be well above the "benchmark prices" quoted by the competition regulator, confirming that manufacturers expecting those prices are being unrealistic. - Australian Financial Review