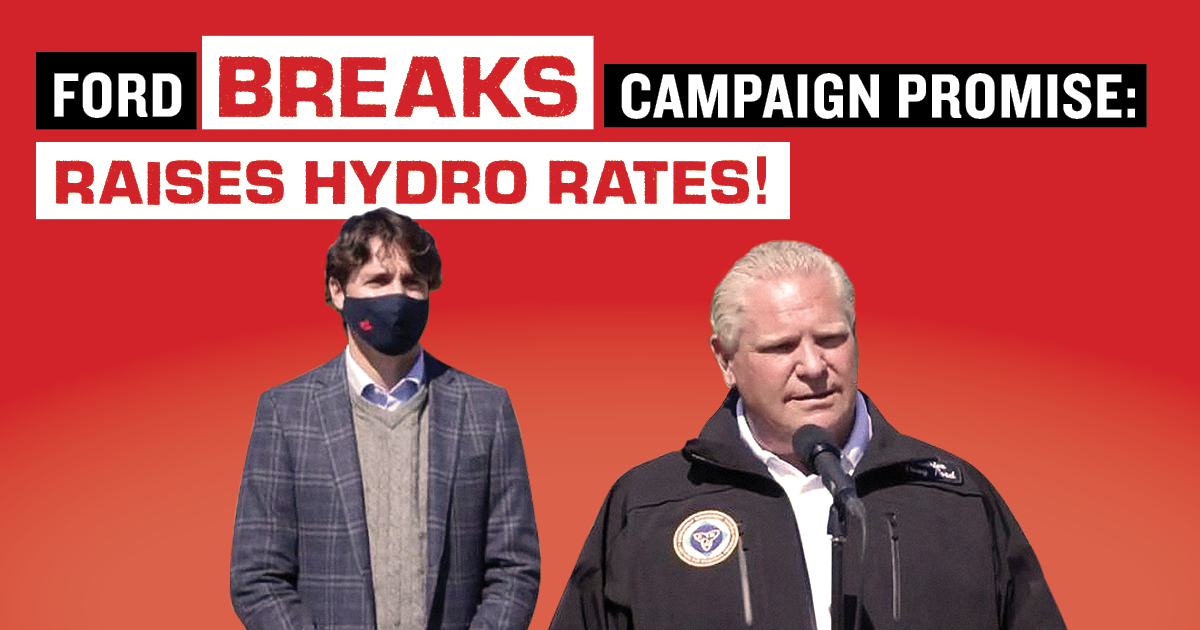 What ever happened to Doug Ford?

The Ontario Energy Board announced in October that electricity rates would go up. And sure enough, on November 1, hydro rates went up by 2%, compared to pre-pandemic levels.

This increase represents yet another broken promise from Ontario Premier Doug Ford. This broken promise is in direct violation of Ford’s commitment in the last provincial election NOT to raise electricity rates.

Ford’s immediate reaction to the Board’s decision to raise rates? The direct quote from the Premier was “I hate it”. Except that the Board was appointed by … Doug Ford.

If keeping his promise meant anything to him, wouldn’t you think he would have laid it out as a pre-condition for things before he appointed the Board? Or, at the very least, been a bit more careful when making those appointments? Is he now going to argue that somehow the fault is the Board’s, not his?

You may remember that the people of Ontario elected Premier Ford on a firm promise to scrap the Green Energy Act and the wasteful spending alongside it. Ford said that if elected, he would lower electricity rates by as much as 12%.

But then Ford flipped, and then flopped, and he’s been flip-flopping all year on anything to do with affordable energy. Let’s recap.

First, Ford surrendered to pressure from Justin Trudeau and embraced Canada’s Paris Agreement commitments to reduce emissions by 30% below 2005 level. This Ford did through his own made-in-Ontario environmental policy, despite the fact that Ontario Auditor-General Bonnie Lysyck argued the province’s plan would not reach those goals.

Breaking another election promise, Ford then introduced his own carbon tax with an industrial emission policy. He claims the tax is on “big emitters”, but, as we wrote about previously, it will only result in costs being passed on to consumers. Another broken promise.

And most recently, Ford handed out subsidies for electric vehicles, with taxpayers’ money. Hundreds of millions of dollars of taxpayers’ money, handed out, with the finesse of Dalton McGuinty and Kathleen Wynne, Ford’s two Liberal predessors.

All of these things will mean higher, not lower, energy prices.

And now, sure enough, that’s what the Ontario Energy Board has done: electricity prices rose effective November 1, 2020. And the response of the now green premier? In effect, ‘gosh golly gee that shouldn’t be happening’.

But it is happening. And it was entirely predictable. And Doug Ford created the conditions for it.

How could Ford have stopped this? Easily. He could have said “no” to the Paris Agreement and the ridiculous spending that accompanied that green scheme.

Ford could have said “no” to an industrial carbon tax and signaled to industry that Ontario would not create one – that would have attracted business and the growth that comes with it.

Ford could have said “no” to electric vehicle subsidies.

Instead, Ford has completely surrendered to Justin Trudeau and the Liberal Party’s green agenda.

While I was an MP back in the 1990s and 2010s, I had a great perch from which to view senior politicians as, time and again, they backed away from their positions on things once elected. Once in office, they forgot what promises got them elected, and who got them elected.

But Premier Ford’s retreat from his promise to defend the average Ontarian from electricity price increases has been particularly swift – so swift that the Premier now sounds an awful lot like the McGuinty/Wynne Liberals he replaced.

Last week, the Ontario government released their 2020 budget. In it, the government promised to cut hydro rates for businesses – and it looks like he will give businesses a bit of a break. Good news, right? Even if he is abandoning the ordinary consumer, isn’t it good to give business some relief?

At first blush, yes. But think of the big picture here. First, Ford moves some hydro costs from the ratepayer to the taxpayer (those hydro costs taken from business bills aren’t disappearing, they are just being absorbed by all Ontario taxpayers now) while he still wastes huge amounts of public money on green ventures. The net result? More debt for the public, but rearranged to avoid some targeted criticism. And, again to remind you, residential hydro rates rose on November 1st.

Here’s the truth: Ontario has a boat load of electricity debt thanks to a legacy of green policies and bad management from several governments – mostly Liberal. Premier Ford doesn’t have a plan to make it better, because he thinks he has to be green.

Because Justin Trudeau says so.

The result is an even messier energy policy, ultimately setting the province back. If you are an Ontario resident, think of that as you pay your next hydro bill.

Premier Ford, combating high energy prices was what you promised to do when you were elected. You continue to break your commitments to affordable energy in Ontario. When it comes to energy issues, you are acting just like the Liberals that you replaced back in 2018.