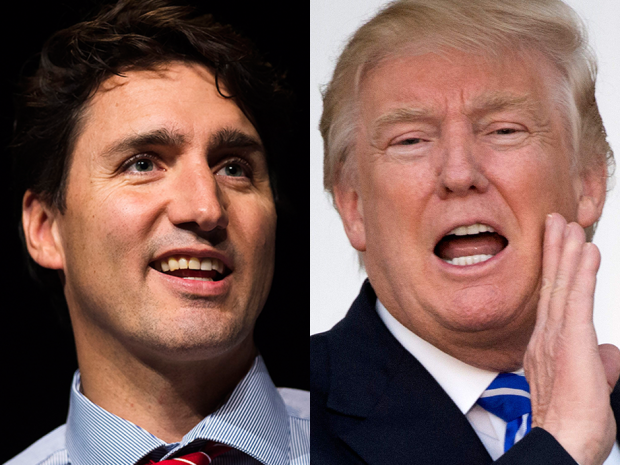 When Justin Trudeau shuffled his cabinet last week, it signalled he’s taking the next United States president seriously. Finding the right mix of people to work with White House officials is important. But government policies also matter. Mr. Trudeau will need to do more to keep Canada competitive and protect Canadian jobs.

Donald Trump is ready to upend U.S. policy on everything from trade, to defence treaties, to immigration. But the president-elect’s domestic proposals on taxes and energy are our greater challenge.

Mr. Trump will move quickly to cut the business tax rate from 35 per cent to 15 per cent. Add in the four-per-cent average corporate tax applied by state and local governments and the new U.S. effective tax rate could soon be a cool 19 per cent, about eight points lower than Canada’s 27-per-cent average when federal and provincial rates are combined. Our country’s tax advantage is coming to a sudden end. If the U.S. leaps ahead of us with a lower rate, businesses will invest more there.

This brings us to energy. Mr. Trudeau wants all provinces to put a price on carbon, directly with a carbon tax or indirectly with cap-and-trade regulations. The impact is the same: more expensive for Canadians to get around, heat their homes and keep the lights on. Pricing carbon will increase the cost of almost everything, including food.

A typical Canadian family will likely pay more than $1,200 a year in new energy taxes by 2022, twice that amount if Ottawa decides to apply its new tax aggressively.

Carbon pricing isn’t the only way Mr. Trudeau plans to raise electricity rates. His order to provincial governments to shutter coal-fired stations by 2030 will eliminate a source of cheap and reliable power from Canada’s energy mix. Here is what it means for one small province: New Brunswick has a single coal-burning power plant and NB Power officials have said closing it would increase provincial electricity rates by a staggering 38 per cent. Replacing this lost power source will cost N.B. businesses and consumers more. Meanwhile U.S. ratepayers will be spared from paying a carbon tax and that country’s energy costs will likely fall as Mr. Trump repeals President Barack Obama’s executive orders restricting the extraction and use of fossil fuels.

And what’s Ottawa’s response to all this? Mr. Trudeau says Canada could win if the incoming president rejects plans to make U.S. energy more expensive. He told a Calgary business audience last month, “We know that this is the way the world is going and if the United States wants to take a step back from it, quite frankly, I think we should look at that as an extraordinary opportunity for Canada and for Canadians.” It’s a brave face. But does it make sense?

Mr. Trump’s energy policies twinned with deep tax cuts will reduce Canada’s competitiveness. Canadian policy-makers, along with the prime minister, don’t have to like this change and may privately curse it. But our federal and provincial governments cannot pretend Mr. Trump’s policy agenda won’t have any impact on the economy when Canadian jobs are at risk.

Canada’s energy sector is already concerned government policy will soon put our country at a competitive disadvantage. It worries investment and jobs will move to the U.S. market.

Things aren’t much better in Ontario where some businesses are eyeing nearby U.S. states with more affordable energy prices. Ontario electricity prices have skyrocketed thanks to costly provincial regulations. Carbon pricing means bills for natural gas, gasoline and diesel are going up next. The Coalition of Concerned Manufacturers of Ontario, a group of small- and medium-sized businesses, has raised the alarm and is urging the government to reverse course or risk job losses.

Canada’s long-term growth depends on its businesses remaining competitive. Affordable energy is part of the mix along with tax rates. Likewise, the prosperity of Canadian families is impacted by the price of home heating fuels, power and gas. A dramatic price increase leaves households poorer whereas inexpensive energy means households have more income for other things.

With Canadian energy prices set to increase relative to U.S. prices, there will soon be an additional cost to Canada’s carbon policy. That price is less investment and lost jobs. Lower U.S. taxes will only compound the problem. This is something Canadian workers can’t afford. The Trudeau government’s next move should be an overhaul of its carbon-pricing plan to account for the policy shift south of the border. Canada needs a strategy that doesn’t penalize businesses and ordinary Canadians.