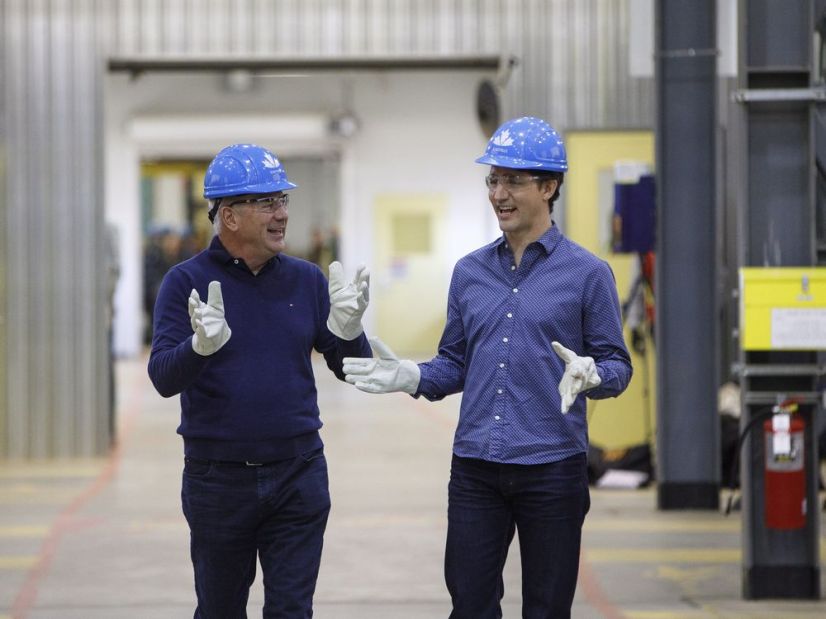 A crisis in Alberta’s oilpatch has two industry heavyweights — Suncor Energy Inc. and Cenovus Energy Inc. — slugging it out over how best to fix Canada’s oil industry. Funny thing, just a few years ago they were in the same corner boasting how they’d just solved all their future problems together. What went wrong?

Due to Canada’s woefully inadequate pipeline capacity, the gap between the price fetched by Alberta and the world benchmark price has recently been hitting record highs, growing to nearly US$50 a barrel. Alberta Premier Rachel Notley claims the situation is costing the country $80-million per day.

Notley recently appointed a three-person panel to come up with short-term solutions to this long-term problem. Notable among them is a plan floated by Cenovus CEO Alex Pourbaix for a government-mandated province-wide production cut. Citing a “full-blown economic crisis,” Cenovus wants Notley to impose oil quotas on producers to eliminate the supply glut and give prices a boost.

Suncor doesn’t agree. “Our position is that government intervention in the market sends the wrong signal,” a spokesperson told the Financial Post. While upstream producers such as Cenovus have been taking it on the chin, large integrated oil companies like Suncor are less affected by the price gap: Suncor pumps oil, then refines it in Canada and retails the gas at its Petro-Canada outlets. Not only is the firm less tied to export markets, it essentially sells the discounted oil to itself as an input, and then markets the output to consumers at full price. Cha-ching!

On the immediate question of which firm is right about how to handle the price gap, the evidence favours Suncor. Cenovus has already cut production based on the assumption it’s better to leave a valuable-but-underpriced product in the ground until it earns a better return. This is a rational market-based response open to any company. But forcing quotas on all firms is not in the best interests of the industry. Supply management inevitably turns entrepreneurs into supplicants for government favours and tireless defenders of the status quo.

Plus, the precedent Cenovus invokes for this plan — former Alberta Premier Peter Lougheed’s famous gambit to “turn off the taps” to Eastern Canada during his battle with the federal government over the National Energy Program — is an inappropriate comparison. In 1980, the motivation was to impose political pain elsewhere in response to bad policy choices in Ottawa. Today, the intent is to mitigate economic pain by imposing bad policies at home.

Regardless of whether Cenovus or Suncor is right, however, there’s a bigger truth to be revealed regarding their joint culpability in creating this unhappy situation in the first place. Exactly three years ago, Cenovus and Suncor both pledged their fealty to the same risky political gamble in hopes of avoiding the kind of crisis now visited upon Alberta.

At the end of November 2015, the CEOs of the two companies stood with their colleagues from Shell Canada and Canadian Natural Resources Ltd. along with representatives from four major environmental organizations, as Notley unveiled her province’s new climate change policy.

Notley’s plan included a phase-out of coal power, a hard cap on emissions for the entire oilsands and a new economy-wide carbon tax. In exchange for supporting this new policy, the four assembled oil company grandees were expecting to obtain that mysterious and elusive gift of a “social licence.” Higher taxes and emissions caps were to be the price paid for being allowed to ship oil to international markets via new pipelines. Notley’s scheme “enables Alberta to be a leader, not only in climate policy, but also in …  collaborative solutions and energy development,” Brian Ferguson, then-CEO of Cenovus, said. That his successor now sees a “full-blown economic crisis” provides convincing proof that the “collaborative solution” hasn’t worked out as expected.

Amid the current crisis, these four carbon-tax backers now find their paths diverging sharply. Shell Canada sold off its oilsands assets last year. Cenovus and Canadian Natural Resources want an oil quota system to save their bacon. And Suncor argues the market should rule. In fairness, all should be ashamed of participating in what has now been revealed as a ruse. There was never any real prospect of a quid pro quo deal on pipelines. They were duped.

Despite emissions caps and carbon taxes, no new pipelines have appeared to take Alberta’s crude to waiting markets and none are realistically in the offing. The Trudeau government deliberately killed Northern Gateway in 2016 and later regulated Energy East to death. The Trans Mountain pipeline expansion is stuck in judicial purgatory. Even Keystone XL, which once looked like a sure thing under U.S. President Donald Trump, still faces interminable delays. And Bill C-69, currently in the Senate, threatens to turn future pipeline proposals into a regulatory nightmare.

The solution to Alberta’s price-gap crisis is not oil quotas. It’s pipelines, less red tape and lower taxes. And you can’t get pipelines built by partnering with environmental groups, virtue signalling on climate change or offering political cover for new carbon taxes and regulations. Surely Cenovus and Suncor, for all their differences, can now agree on that.

Peter Shawn Taylor is a journalist, policy analyst and contributing writer to Canadians for Affordable Energy.