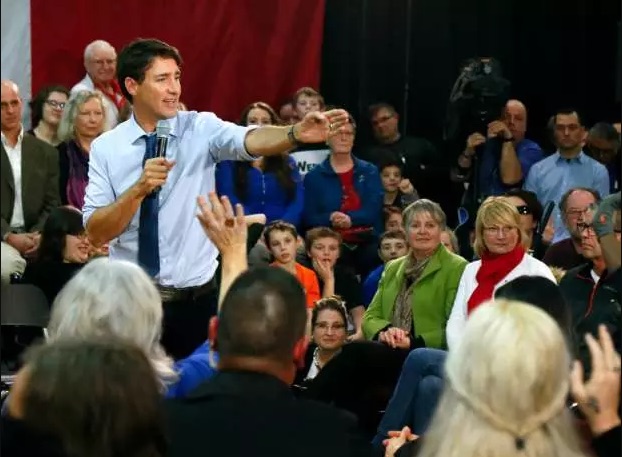 FINANCIAL POST: During a now-notorious town hall in Peterborough, Ont., Prime Minister Trudeau last week came face to face with an issue that could become his electoral undoing — not just in Ontario, but across all of Canada.

The moment came when the Peterborough audience erupted in cheers and applause for a 54-year-old woman, Kathy Katula, who pleaded for the prime minister’s support in her battle against soaring Ontario electricity bills and the burden of living in what she described as energy poverty. “I’m asking you, Mr. Trudeau, how do you justify to a mother of four children, three grandchildren, with physical disabilities, and working up to 15 hours a day, how is it justified for you to ask me to pay a carbon tax when I only have $65 left in my paycheque every two weeks to feed my family.”

After the audience broke out into 10 seconds of applause and shouts of support for the woman, Trudeau bobbed and weaved, riding the technicality that electricity is a local matter and that, in fact, it was the government of Liberal Premier Kathleen Wynne that was responsible for Ontario’s soaring hydro bills, the product of the province’s billion-dollar carbon-fighting boondoggles.

It’s not my carbon tax, said Trudeau, backing away from the problem. “We haven’t brought in any carbon tax yet, ma’am,” he said. “It doesn’t start kicking in for another few years.” That’s technically true, but politically disingenuous. The federal government has declared its intention to have a carbon tax installed in all provinces by 2018, rising to $50 a tonne by 2020, and has praised Ontario’s new cap-and-trade tax — on gasoline, natural gas and other fossil fuels — for being one of the first to fulfill Ottawa’s national carbon strategy.

So Trudeau, sensing political trouble, essentially said that while Ottawa will impose a carbon tax, and Ontario is leading the way, Ontario’s carbon tax is not his carbon tax.

To further muddy the issue, Trudeau said that even if it were Ottawa’s carbon tax, it’s all for a good cause. The ultimate objective, he said, is the total elimination of fossil fuels as a source of energy. “We are in a time of transition,” he said. “The world is moving off of fossil fuels.” Furthermore, even though his government has such a carbon tax in mind or were to force the imposition of such a carbon tax, the money collected would stay in the provinces. He did not mention the federal sales tax on the carbon taxes that would send money to Ottawa.

Trudeau later bestowed one of his trademark hugs on Kathy Katula. But it’s unlikely many at the Peterborough town hall — or watching the event unfold on their TV and social media feeds — accepted the prime minister’s circular attempt to disentangle himself from his own policies.

This is just the beginning of Canadian carbon-tax mayhem. In the wake of the Peterborough town hall, the prime minister and his Liberal staffers would do well to assume that they were witnessing an opening skirmish in what threatens to become a prolonged political battle over carbon taxation, a policy the prime minister now owns as his personal crusade.

Across Canada, to varying degrees of intensity, rebellion against carbon and energy taxes is already emerging. Demonstrations have taken place in Alberta following the imposition of a $20-a-tonne carbon tax. Gasoline prices in British Columbia have risen as high as $1.30 a litre as the B.C. carbon tax was raised to $30 a tonne.

Ontario’s cap-and-trade carbon tax, which came into effect Jan. 1, has a direct impact on gasoline prices and on electricity consumers such as Kathy Katula. The tax applies to natural gas used to generate electricity. Parker Gallant, the former banker who has been campaigning against Ontario’s green-energy scheme for more than a decade, reports that his first natural gas bill for 2017 includes a $20 increase to cover the cap-and-trade tax, with another $2 of HST levied on the cap-and-trade tax.

Even before U.S. president-elect Donald Trump’s stand-back climate policies emerge, Canada’s plan to rid the planet of fossil fuels by imposing punishing carbon taxes was going to become a growing political wedge issue among voters. When voters discover that this year’s carbon taxes are the beginning of a constant escalation for years to come, sending energy costs ever higher, there will be trouble.

It is no surprise that astute political activists sense an opportunity. John Williamson, a former Conservative MP and former executive with the Canadian Taxpayers Federation, has just launched a new activist group, Canadians for Affordable Energy. He’ll have lots of ammunition, as he notes in a commentary in today’s FP Comment.

Carbon-tax proponents have so far been able ride along on the low level of the initial actions. Ontario’s Environment Minister, Glenn Murray, likes to say that the new taxes will hardly be noticed, which, if true, makes make them ineffective for their stated objective of lowering carbon usage.

The low startup $20- and $30-a-tonne carbon taxes will soon have to rise to $50, then $100 and on to $200 a tonne and beyond. Parker Gallant calculates that Ontario’s cost of carbon reduction so far exceeds $890 a tonne. Maybe, at that level, the carbon-emissions reductions claimed by ecofiscal theorists will materialize. But likely not. There’s a better chance Kathy Katula, John Williamson and Canadian voters will end Justin Trudeau’s carbon-tax crusade well before $200 a tonne, if not $50 a tonne.