Where’s the due diligence on renewables? 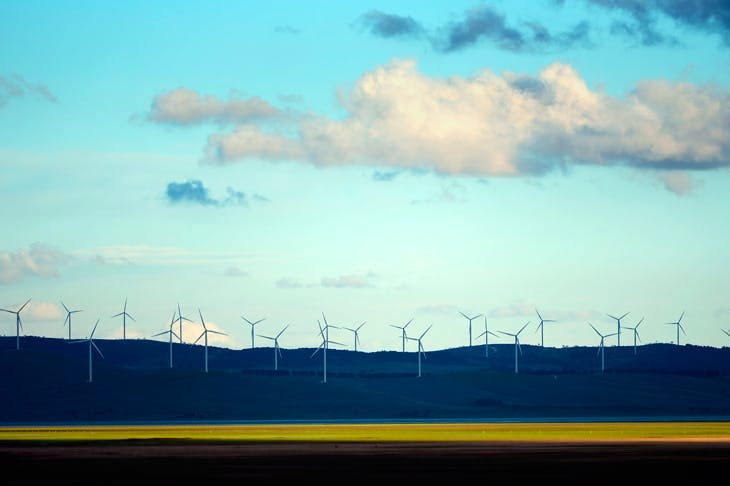 You know that lovely warm glow you get on a summer’s evening when it’s still 42 degrees outside and you’re reaching into your fridge for your first restorative tinny when suddenly the lights go out and your air-con too?

Of course you do, especially if you live in South Australia, where, thanks to ambitious ‘green’ energy targets, power outages like this have become the new normal.

‘No worries!’ you say. ‘I accept that personal discomfort, inconvenience and mild danger are but a small price to pay to save the planet from global warming. Only a dinosaur would expect to go on being able to use electricity as and when he wants it. I for one welcome the bright new age of darkness, clean energy and government rationing!’

Except you don’t, do you? If you’re anything like all the commonsense Aussies I met last time I visited, you’ll be absolutely bloody livid: ‘We’re Australia, the lucky country, not some third world backwater. We invented commercial refrigeration. We’re sitting on top of a continent’s worth of cheap energy. What kind of eco-fascist madness is this?’

The madness is the result of the global warming scare which has dominated Western policymaking for the last four decades. Some countries are starting to get over it – notably Donald Trump’s United States –but in Australia it continues to exert a grip tighter than the bite of a ravenous saltie.

Climate change lunacy has affected everything from your right to clear trees off your property (often you can’t: they’ve been designated a carbon sink) to where you can’t build your waterfront home (junk science paranoia about rising sea levels) to how many millions of dollars you waste on desalination plants (for the permanent drought that never came).

South Australia has been the hardest hit so far by the great renewables disaster. No doubt it sounded good when premier Jay Weatherill and Energy Minister Tom Koutsantonis first began evangelising about their world-beating clean energy targets. The consequence, though, has been blackouts, job losses and economic chaos caused by rocketing power prices and intermittent supply.

But instead of apologising, the Australian Energy Market Operator (AEMO) is asking customers to take it on the chin. In a process euphemistically known as ‘load shedding’, the AEMO can order customers’ power supplies to be switched off in times of extreme stress so as to prevent wider system failure.

Why is this happening now in a developed nation in the 21st century? The simple answer is that renewables, apart from being two or three times more expensive than fossil fuels, are intermittent, unreliable and unpredictable.

If the sun isn’t shining (which it doesn’t, at night, not even in Australia) or the wind isn’t blowing, then the power needs to come from more conventional sources like coal and gas. The more renewables in the energy mix – 40 per cent of South Australia’s energy capacity is now wind – the more inherently unstable the grid becomes.

Hence the great blackout of September last year: a storm forced a shut down of wind power to prevent surges; this in turn crashed the entire local grid.

All this man-made chaos might be excusable if it served any useful purpose. It doesn’t.

Increasingly, it is becoming apparent that renewables are one of the great, truly bad ideas of the last 100 years: a boon for troughing rent-seekers, virtue-signalling pollies and posturing greenies but terrible for the rest of us poor saps who have to subsidise them; disastrous for the environment (all those birds and bats sliced and diced); utterly ineffectual in ‘combatting climate change’ (Australia produces less than two per cent of the world’s greenhouse gases).

So what’s to be done? What’s painfully clear is that – with rare exceptions like Cory Bernardi and One Nation’s Malcolm Roberts – Australia’s politicians have no appetite for reining in the problem, for fear of suffering the same fate as Tony Abbott, whose political demise was partly wrought by the Green Blob. It doesn’t help that most of the media – especially the ABC –is so heavily in thrall to eco-zealotry and refuses to question the (fake) green ‘consensus’.

That means people who believe in regaining the cheap, reliable energy Australia used to have before the green madness took hold have a fight on their hands. One way they might yet win is through the courts via judicial review. What, after all, is the most basic requirement taxpayers ought to expect from their governments? Due diligence on public expenditure.

This is going to be one of the tactics of Cool Futures Funds Management – a contrarian Aussie hedge fund of which I’m an enthusiastic supporter because it is, as far as I know, the first financial institution to try to profit by holding the Green Blob’s dodgy dealings to account.

It has approached the government with a low-cost, shovel-ready, clean-coal technology solution which could solve all Australia’s baseload energy supply problems. But because this solution involves fossil fuel, it will inevitably be resisted heavily by the greens and their useful idiots in government and business. And that’s where the courts may have to adjudicate.

Australians deserve better than to be held to ransom by the duff ideology of a few eco-zealots. If governments can’t provide their voters with something as basic as reliable energy, then they must be held to account for their negligence.

South Australia is a warning the rest of the country should heed before it’s too late. And the answer to your problems, my Aussie friends, is most definitely not blowing in the wind. It’s right there, underneath your feet.