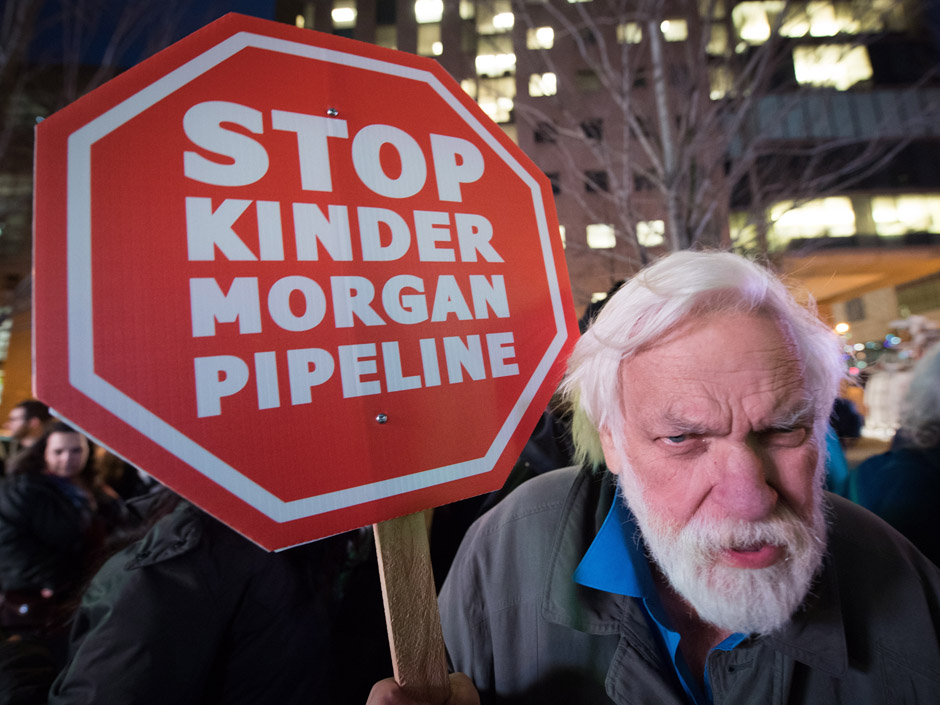 If they kill TransMountain, our rule of law is broken: Morgan

Whether they like the project or not, Canadians better hope Kinder Morgan can complete its pipeline. President Donald Trump has said Canada’s energy exports are unfair to the United States. He is clearly oblivious that we’ve given Americans the biggest trade gift ever to flow from one country to another because of our own, self-inflicted inability to access offshore markets with Canadian oil. After almost a decade and more than $1-billion spent on planning and regulatory filings, five major oil-export pipelines remain unbuilt, leaving us with no choice but to sell our oil to U.S. buyers at below world prices. - National Post

With just a tentative grip on power, the new Green-supported NDP government in British Columbia will be expected to deliver on some very specific campaign promises. One of these is a broad vow to tackle affordability for regular folks. Luckily for the NDP’s premier-to-be, John Horgan, in their last gasp at retaining power the departing B.C. Liberals gave their blessing to numerous affordability policies drawn straight from the platforms of the NDP and Greens. Boosted welfare rates, eliminated tolls and cheap day-care spaces are just a few of the measures that will be unanimously supported in the legislature. Nobody questions the NDP’s determination to spend money and redistribute wealth. A major point of contrast between them and the deposed Liberals is that unlike their predecessors, the NDP is firmly opposed to several Liberal-supported initiatives that will generate the money to pay for all that spending. - The Province

The head of Hydro One makes double the salary of his next highest-paid provincial counterpart, and 10 times that of some CEOs in smaller provinces. At $4.4-million in salary and bonuses in 2016, Hydro One CEO Mayo Schmidt is well above the Alberta CEO, whose pay package topped out at $2.2-million in 2015. On Wednesday, Ontario PC Leader Patrick Brown said if elected, he would clamp down on salaries at Hydro One and electricity producer Ontario Power Generation, through legislative or policy changes, though he was not specific. “It’s time to stop rewarding the people who are presiding over the Wynne Liberal hydro rip-off,” Brown said in a written statement. - Toronto Star

The Canada Pension Plan Investment Board will pay nearly $1.4-billion to become the largest partner in the Corrib offshore natural gas field, 83 kilometres off the coast of Ireland. The Toronto-based fund manager will initially buy a 45% interest in the project from a unit of the Shell energy business for 830 million British pounds. - Globe & Mail

The United States is challenging Australia and Qatar as the world's largest exporter of natural gas, according to a new report by the International Energy Agency. Global gas demand is expected to grow by 1.6% a year for the next five years, with consumption on track to hit almost 4,000-billion cubic meters by 2022. China is projected to account for almost 40% of growth. "The U.S. shale revolution shows no sign of running out of steam and its effects are now amplified by a second revolution of rising LNG supplies," IEA Executive Director Fatih Birol said in a statement Thursday. - CNBC

Three years into the biggest oil downturn in a generation, industry bosses see the recovery slipping further from view. It could easily take until the end of the decade for better times to return to an industry that’s already endured a longer slump than most people expected. Executives gathering at the World Petroleum Congress in Istanbul said they’re still focused on repairing battered finances and resetting their operations to withstand low prices. - Bloomberg

Florida Power & Light is planting large devices across Florida that look like trees and harness the power of the sun to create electricity. The utility has begun installing these 24-foot-tall, solar-powered “trees” to bring attention to the use of solar energy. - Sun Sentinel

Sen. Shelley Moore Capito, R-W.Va., joined a bipartisan group of senators on Wednesday leading a push for a bill intended to balance the interests of the fossil fuel industry and the environmental community by increasing tax credits for carbon capture technology. The bill is called the FUTURE Act – for “Furthering carbon capture, Utilization, Technology, Underground storage and Reduced Emissions.” - The Dominion Post

Two key players in the Republican and Democratic parties in Nevada are teaming up to host a clean-energy talk as the White House abandons a worldwide agreement to curb climate change and states are moving to the forefront of the fight. Former Democratic Senate Majority Leader Harry Reid said Wednesday that he’s bringing back a summit last headlined by President Barack Obama in 2015. This time, the co-host is a Republican — Gov. Brian Sandoval — a bipartisan move as Congress remains gridlocked on health care and other issues. However, Sandoval is no newcomer to clean energy efforts or breaking with his own party. He ushered in a world-renowned rechargeable battery factory and supported expanded access to solar, wind and geothermal energy throughout his six years in the governor’s office. - National Post

EDF Energy Renewables (EDF ER) has announced the purchase of 11 wind farm sites in Scotland from development and asset management company Partnerships for Renewables. In an announcement on Thursday, EDF ER said that the Scottish sites had a potential capacity of 600 megawatts. EDF ER added that three sites already had planning consent, while one site was in the planning system. Seven other sites were in development. - CNBC News

The adoption of several cleaner coal-fired power stations would help Australia easily achieve its 2030 emissions-reduction targets as long as the new facilities replaced ageing black-coal and brown-coal-fired generators, according to a new analysis. - The Australian

Queensland businesses have warned they will have to sack staff or increase prices to deal with rising energy costs. It comes as energy ministers meet in Brisbane today to discuss the recommendations of the Finkel Review and after the South Australian Labor Government accused Queensland of gaming the energy ­system. According to preliminary results from a Chamber of Commerce and Industry Queensland survey, 20% of businesses will have to cut staff in the wake of rising electricity costs. The survey also found about 60% would have to pass on the costs, while 6% of businesses would be forced to close. About half said electricity prices rises had had a critical effect on business and 85% said bills had risen by up to 50%t in past two years. - The Courier Mail

Energy funding to test the tides

The Australian Renewable Energy Agency (ARENA) is to fund a new project to map Australia’s tidal energy resources. The three-year project will be conducted by the Australian Maritime College at the University of Tasmania in partnership with the Commonwealth Scientific and Industrial Research Organisation (CSIRO), the University of Queensland and industry. Together, the partners will explore the future potential of tidal energy in Australia. - Public Service News