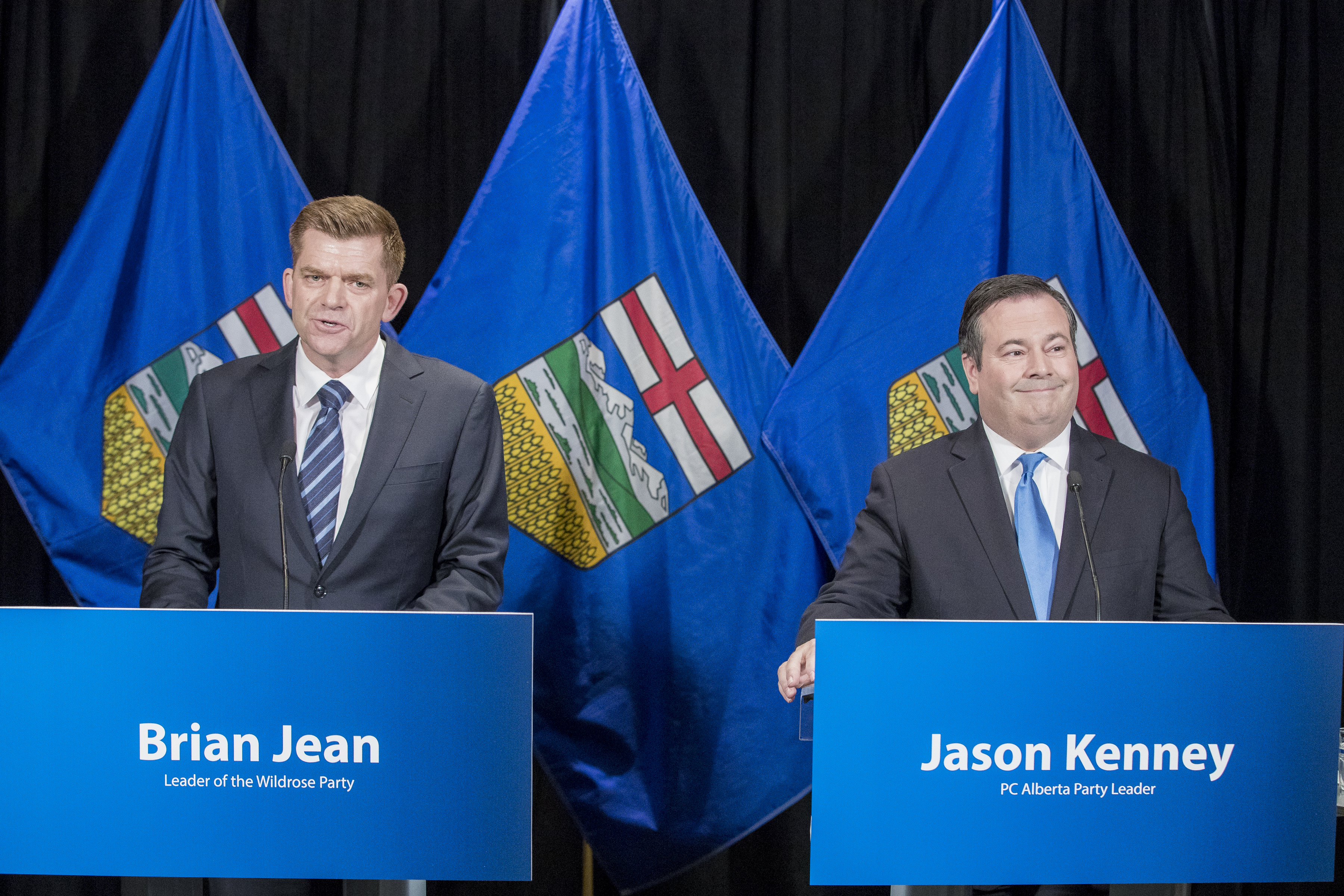 The merger of Alberta’s two main conservative parties creates a new political force in the heart of Canada’s oil patch that threatens to unseat Premier Rachel Notley and kill the province’s carbon tax. Members of the Wildrose and Progressive Conservative parties voted Saturday to create the United Conservative Party. Combined, those parties hold 30 of 87 districts, though they received 52% of the vote in the last election. While the merger agreement doesn’t specify a plan to repeal the carbon tax, its key figures have all campaigned against it. Repeal of that will set up a collision course with Prime Minister Justin Trudeau, who has imposed a minimum carbon price nationally as of 2018. Alberta is Canada’s heaviest carbon emitter, though only its fourth-most populous, and a frequent target of environmental and anti-oil campaigns.  - Bloomberg

The people of Tillsonburg and Southwestern Ontario are the latest victims of the provincial government’s inconsistent and incoherent public policy on energy. On Tuesday, Siemens announced the closing of its Tillsonburg wind-turbine plant, which means 340 jobs lost in the town this year, including 206 immediately. Despite the government’s claim that the “greening of the economy” would create an influx of new jobs in the green tech sector, it hasn’t turned out that way for Southwestern Ontario. And no matter how much the government is spending on green initiatives the green jobs aren’t appearing. Or if they are, they aren’t sticking around. - London Free Press

A Canadian corporate champion that apparently will turn the shambles of Ontario’s electricity system into a miracle of state capitalism. Hydro One Ltd., the government-controlled Ontario holding company for the province’s electricity distribution monopoly, is to acquire another regulated monopoly holding company, Avista Corp., located a convenient 3,720 kilometres west of downtown Toronto. According to Hydro One Ltd., the $6.7-billion equity and debt deal will create one of the largest regulated utilities in North America, increase stable earnings through fully regulated utility operations, generate efficiencies and increase the growth profile of the newly merged operation. Mayo Schmidt, CEO of Hydro One, said “This is a proud moment for Canadian champions as we grow our business and become a North American leader.” What can go wrong? With regulated utilities, when things go wrong the pieces often have to be picked up by ratepayers. One certainty is that the success of monopoly mergers depends on the constant flow of cash from ratepayers who are required to produce rates of return to shareholders. - National Post

Premier Kathleen Wynne is defending Hydro One’s takeover of an American utility that owns a coal plant after years of Liberal boasting that Ontario has banned the plants to cut pollution and greenhouse gases. She suggested the $6.7-billion purchase of Avista, based in Washington state, heralds the spread of Ontario’s clean-energy push beyond the province’s borders. But critics said Ontario, which sold a majority of shares in Hydro One to raise money for transportation infrastructure and now owns a 49% stake, is taking a step backward with the deal. - Toronto Star

Ontario ratepayers should share in gains of Hydro One: Editorial

The big winners in the $6.7-billion acquisition of an American utility company by Hydro One, formerly owned by the Ontario government, are the shareholders of the publicly traded company.

One stock market analyst says Hydro One shares, after falling about 4% so far in 2017, should see base growth of 5% annually. That would amount to a return of almost 9% for investors. The annual dividend was increased in May to 88 cents a share. If acquisitions continue it could go even higher. Here’s the rub: potentially healthy gains in the accounts of Hydro One shareholders would come as people across Ontario continue to express outrage every time they open their electricity bill. But there’s one way to guarantee that Hydro One and other electricity ratepayers in Ontario will enjoy some of the benefits received by the company’s shareholders: the provincial government could commit to using hundreds of millions of dollars of dividend revenue earned annually from shares it has to hold onto to offset crippling electricity costs.  - Toronto Star

Branding Canadian oil green would be good for industry and for climate change: Pittis

To much of the world, Canada's oil production is indelibly linked to images of tortured landscapes that make oilsands mining seem like something out the evil land of Mordor in J.R.R. Tolkien's Lord of the Rings. For that reason and several others, the idea of green Canadian oil may seem like an oxymoron. But greening Canadian oil is not only possible, there are reasons why it would be good for business and the environment. As fossil fuel prices stubbornly refuse to fulfil the promise of a speedy bounce-back to levels that made many of today's extraction projects feasible, there are signs that there may be no shortage after all. Petroleum use continues to grow, and even in countries like France that plan to end the use of fossil fuel vehicles, the target date is decades away. - CBC News

Recent political earthquakes have cracked the foundations of the global climate crusade. Two major political parties agreed to merge: members of the decades-old Progressive Conservatives and the Wildrose party proved so fervent to team up against NDP policies that referendums in both parties won more than 95% support. Getting both parties within a few points of unanimity makes it clear that right-leaning Albertans have no greater priority than stopping the vote splitting between the PCs and Wildrose, whose combined vote in the 2015 provincial election outstripped Notley’s NDP. That was in an election when the NDP mentioned no plans for a carbon tax. Polls show roughly two-thirds of Albertans disapprove of it, and of Notley’s dubious, masochistic spin that taxing Albertans gets new pipelines built. - Financial Post

To panic, or not to panic, is a predicament faced by Canadian business leaders after the United States this week outlined its desired outcomes from a renegotiation of the North American Free Trade Agreement. In Alberta, concerns centre primarily on areas of energy. In the original NAFTA agreement, Canada promised to keep the taps on and to supply the U.S. with the oil and natural gas it needed. Technology has since unlocked vast reserves of both commodities south of the border, reshaping the North American energy market. Moreover, any new agreement from a NAFTA renegotiation would include Mexico’s energy resources. What hasn’t changed is that the focus on continental energy security — if not energy self-sufficiency — remains a priority for the United States, which should be seen as positive in Alberta. - Calgary Herald

Environmental Report on pipelines is favourable for developers

The Atlantic Coast Pipeline intended to carry natural gas across West Virginia, Virginia and North Carolina would have some adverse environmental effects, including impacts on water resources, forest and other habitats, but most could be reduced to insignificant levels, an assessment by federal regulators found. The Federal Energy Regulatory Commission, which oversees interstate natural gas pipelines, released its final environmental impact statement Friday for the proposed 600-mile (965-kilometre) pipeline, which has broad support from political and business leaders but is staunchly opposed by environmentalists and many affected landowners. The assessment is a major milestone in the approval process for the project that will cross hundreds of bodies of water, mountainous terrain, national forest, and the Appalachian Trail. Its findings were largely favourable for developers. - National Post

Russia's energy minister has called on major oil producers to show greater discipline in sticking to output cuts aimed at raising the price of crude. Following a meeting of OPEC and non-OPEC countries in the Russian city of St. Petersburg, Alexander Novak says "despite the high level of compliance with the agreement, we insist on all countries fulfilling their obligations 100%." The comments were reported by Russia's RIA Novosti agency. Oil prices have stayed below $50 per barrel in recent weeks amid claims that compliance with the lower production levels was slipping. The International Energy Agency said compliance fell to 78% in June, against 95% the previous month. High U.S. output has put pressure on oil prices, as have production increases in OPEC members Libya and Nigeria. - Business Insider

New figures show that wind produced enough power to meet, on average, the electrical needs of 124% of Scottish homes between January and June of this year. The first six months of 2017 saw turbines send more than 6.6-million megawatt hours of electricity to the National Grid, enough to supply a little over three million Scottish homes. The figures come from analysis by WWF Scotland of data provided by Weather Energy. "The first six months of 2017 have certainly been incredible for renewables, with wind turbines alone helping to ensure millions of tonnes of climate-damaging carbon emissions were avoided," Sam Gardner, WWF Scotland's acting director, said in a statement. "Scotland is continuing to break records on renewable electricity, attracting investment, creating jobs and tackling climate change," Gardner added. "If we want to reap the same rewards in the transport and heating sectors we need the Scottish Government to put in place strong policies on energy efficiency and transport in the forthcoming Climate Change Bill." - CNBC

Sydney is on the blink as surging electricity prices put 60,000 homes in danger of disconnection

Tens of thousands of people across Sydney are on the verge of having their lights turned off, with the government forced to roll out rescue cheques in a bid to help struggling families pay their electricity bills. Calculations from The Daily Telegraph can reveal there are roughly 68,400 homes across New South Wales at risk of having their power cut because they cannot afford their rocketing bills. The situation has become so dire that 77% of low-income NSW households are going without heating in a bid to reduce their onerous power bills, new research from the NSW Council of Social Service (NCOSS) shows. And one in three low-income earners have been forced to stop using hot water for bathing to pay for energy bills. Economist Bruce Mountain said NSW had a standard kilowatt per hour price more than double that of Great Britain, Sweden, Greece and Germany­. NCOSS chief executive Tracy Howe said “electricity poverty” was a huge concern. - Herald Sun

The gas industry is set for another showdown with government over LNG exports after Federal Resources Minister Matt Canavan declared he was "underwhelmed" by the commitments so far from producers to address the east coast gas shortage while exporters insist that restricting exports would do more harm than good. - Australian Financial Review

Why it’s time to abolish the Renewable Energy Target: McCrann

Of course the Renewable Energy Target should be abolished. The RET is the fundamental reason that power prices across the nation have more than doubled to now be among the highest in the world in a country awash with the coal that used to give us the cheapest and most reliable power in the world. The RET is also the fundamental reason not just South Australia but all three southeastern mainland states face the risk of blackouts this summer. We are teetering on the edge of an energy apocalypse with what is still just a future (2020) RET target of 20% — with more like only 6-8% of electricity today actually coming from ‘real’ renewables (wind and solar). They are now telling us that wind and solar electricity generation is now cheaper than coal-fired generation and getting ever cheaper everyday. Well, if that’s true, why do we need a RET? Surely, the only power generation anyone would build from now on would be wind or solar? Except, you know the truth of that claim. In short, it is complete and utter garbage. You will have to abolish reality before wind and solar become cheaper than coal-fired power. The only way they are ‘made cheaper’ is by imposing massive unjustified costs on coal-fired power and giving wind and solar massive direct and indirect subsidies. - Herald Sun