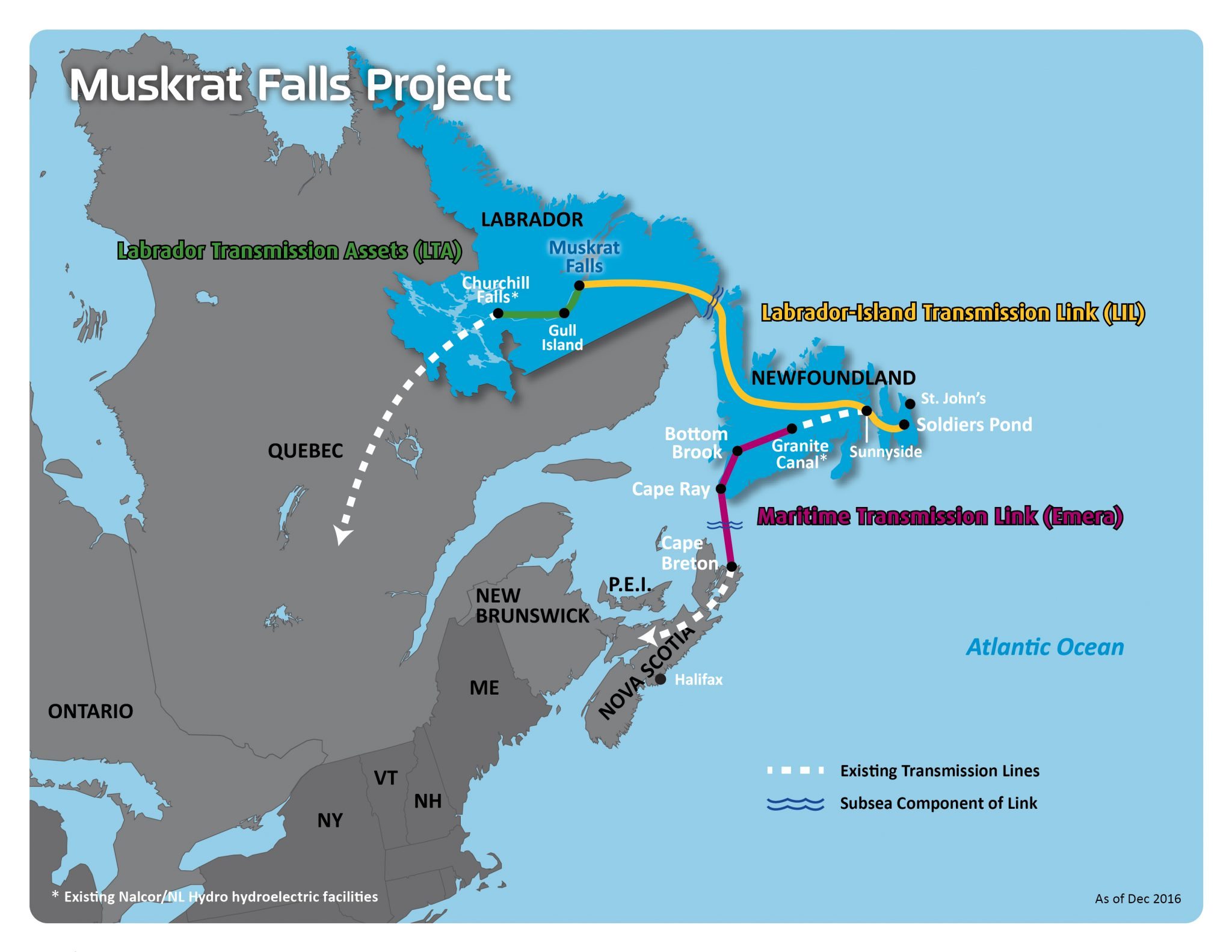 Called a boondoggle as of last update, the Muskrat Falls project estimates have gone up again, standing now at $12.7-billion. That total cost, including financing, is up from $7.4-billion at the time of the sanction of the hydroelectric project in 2012. Looking only at capital cost, construction without financing costs, it began at $6.2-billion, but now stands at $10.1-billion. “We remain focused on finishing the remaining 25% of the (Muskrat Falls) construction while pursuing ways to further reduce the electricity rate impact to customers from this project,” Nalcor Energy president and CEO Stan Marshall said in a statement. On the rising cost on the Muskrat Falls project, the result will be a further expected increase in power rates. The current estimate for Newfoundland Power customers (as Newfoundland Power will purchase from Nalcor) is a cost of 22.89 cents per kilowatt hour as of 2021, without mitigation, as opposed to 15.12 cents per kilowatt hour estimated for the same period back in 2012. - The Telegram

The Liberal government is proposing to allow oil and gas exploration in a new marine protected area that it plans to establish where the Gulf of St. Lawrence meets the Atlantic Ocean. Ottawa released an impact statement Friday on its Laurentian Channel protected area, a 11,619-square-kilometre stretch of ocean in which commercial activity would be limited in order to protect vulnerable marine life. The establishment of the marine protected area (MPA) is part of Prime Minister Justin Trudeau’s promise to set aside 10% of Canada’s coastal waters by 2020. - Globe & Mail

Carbon tax is doomed to failure, so don't celebrate just yet

Carbon tax advocates can be forgiven if they look back on 2017 with a sense of triumph, after the Trudeau government negotiated the implementation of various provincial schemes that effectively amount to a national carbon tax. It would be premature to celebrate, however, since the carbon tax seems doomed to failure over the long run because of its design flaws and poor political packaging. - National Post

The angst of the entrepreneurs

As he totes up the added costs, his voice shakes. More than a quarter of his production already goes to the United States, and despite having sunk millions of dollars into his Woodbridge location, he is asking his chief financial officer to price several U.S. states to see whether it might make sense to relocate manufacturing operations there, while turning the current factory into a warehouse that would employ only a handful of people. The provincial government loves to brag about attracting units of U.S. tech giants such as Google … but it shows little interest in listening to the small and mid-sized businesses already established in the province. - Globe & Mail

The list of challenges facing Canada’s oil and gas sector just keeps growing. Oil’s latest price slump is bad news for energy companies around the world. But Canadian producers face a wider set of mounting obstacles – everything from carbon taxes and an oil sands emissions cap to endless opposition to pipeline developments, argues Ted Morton, a former Progressive Conservative Alberta cabinet minister, now a professor at the University of Calgary’s School of Public Policy. “One argument is that what is happening in Alberta isn’t unique to Alberta or Canada. It’s just that oil and gas are getting beaten up everywhere,” Prof. Morton says. “I reject that. Some of the same companies that have sold their Western Canadian assets have gone and spent equally large sums of money in other jurisdictions.” - Globe & Mail

Quebec’s provincial government is set to invest $1.5-billion within three years in programs that encourage clean energy and reduce dependence on oil, La Presse reports. Some of these include solar electricity, green transport subsidies, and avoiding coal. Pierre Arcand, Quebec’s Minister of Natural Resources, will unveil a plan including 43 measures to reach these objectives. Quebec hopes to reduce oil consumption in the province by 40% by 2030. The first set of measures is expected to see a six per cent decrease within three years. - The Montreal Gazette

Ontario and Quebec each have plans to spend hundreds of millions of dollars to convince drivers to go electric. The measures in place are certainly interesting for buyers of electric vehicles. The problem is that they’re insignificant from an environmental point of view. Insignificant, but not inexpensive: The two provinces encourage the purchase of an electric vehicle and home charging station with subsidies totalling $14,750 in Ontario, and up to $8,600 in Quebec. Each time an electric vehicle replaces a gasoline-powered one, greenhouse gases (GHGs) are avoided. Over the course of the useful life of a vehicle, around 10 years, this represents approximately 28.2 tonnes of GHGs avoided in Ontario, and 29.9 tonnes of GHGs in Quebec, where electricity is produced almost entirely from hydropower. - Toronto Sun

David Rosenberg: Why you shouldn’t worry about the loonie even as oil slides towards $40

With the oil price slipping down to the low-$40s per barrel, some are beginning to worry that the loonie, which has rebounded strongly since early May, could become vulnerable once again. - National Post

When oil prices plummeted, companies across Saskatchewan suspended operations and laid off workers in droves. Now that work is returning, they can’t convince anybody to come back. - Edmonton Journal

Farmers have always followed natural progression when it comes to technology. According to SaskPower, interest in renewable energy sources has been growing. Recently the Crown corporation completed a series of stakeholder engagement surveys across the province. “As we’ve seen in the growth of some of our (renewable energy) programs that we offer, there has been some definite interest from some of our farming customers across the province,” said Janson Anderson, director of customer programs with SaskPower. - Vancouver Sun

For the first time the Energy and Natural Resources conference invited members of the fossil fuel industry to take part in their discussion at the University of Windsor. The goal is to look to the future of the grid and increase its flexibility to get more modern resources on it. But Carriveau said fossil fuels will be a big part of it for the foreseeable future. - CBC News

Canada needs to prepare for environmental impact of cannabis: scientist

Evan Mills, a scientist with U.C. Berkeley’s Energy and Resources Group and member of the United Nations Intergovernmental Panel on Climate Change, is warning Canada to consider marijuana’s environmental impact as it moves toward legalization. Mills’ recent American study found that due to the use of powerful lamps, air conditioning, C02 generators, and humidifiers, marijuana production accounted for 1% of the entire country’s energy use. The report found an annual usage of $6-billion a year, or the equivalent of powering 1.7-million American homes – that’s six times bigger than the entire pharmaceutical industry according to the report. - The Telegraph Journal

A federal judge’s order for more environmental review of the already-operating Dakota Access oil pipeline has several potential outcomes, all of which could spark even more wrangling in a Washington, D.C. court room. The big question is whether the pipeline will be shut down while the case plays out – and if so, for how long.  - The Chronicle Herald

Officials from Oklahoma and more than a dozen other states have sent two letters to California's insurance commissioner, asking that he stop pressing insurance companies to publicly disclose fossil fuel investments and divest from the coal industry, saying it only confuses consumers and unnecessarily brings politics into the insurance market. With California increasing its climate regulations, they are putting pressure on other states to do the same, leading to uncertain economic conditions. - The Chicago Tribune

Trump could clash with natural gas industry over NAFTA

For Mexico, natural gas is a linchpin of its future. It will become the major source of the nation’s power in the next decade, a crucial resource to generate electricity for citizens and industries. Mexico’s Energy Ministry announced a five-year plan in 2015 to expand the country’s pipeline network to accommodate increased imports of gas. More than a quarter of Mexico’s electricity is powered by American natural gas, leaving it especially vulnerable to any upheavals from a trade battle with the United States. - New York Times

The UK’s ambitious target of slashing carbon emissions by more than half within 13 years is at risk because of government dithering on energy policy, industry professionals have warned. A survey by the Energy Institute, the professional body for the energy sector, has found that four fifths of its members believe the UK is currently on track to miss the 2030 goal. - The Guardian

The closure of the UK’s largest gas storage plant has prompted warnings that the country faces more volatile winter gas prices and is becoming too dependent on energy imports.  - The Guardian

South Australian households and businesses face further increases to their electricity bills — this time to secure the grid and prevent another catastrophic statewide blackout. The Australian Energy Market Commission (AEMC) will on Tuesday release tough draft rules for the national energy market aimed at reducing the risk of widespread blackouts as a result of increasing use of wind and solar power. Some of the rules add new costs into the grid and the report conceded there would be flow-on to consumers but the AEMC has tried to minimise the hip pocket pain. - The Advertiser

The Australian Renewable Energy Agency (ARENA) and the NSW Government will commit $15- million in funding for a demand response pilot. ARENA will provide grant funding to support tech development costs associated with demand response projects. These include inputting renewable energy into the electricity while maintaining frequency, a challenge for asynchronous generators like solar panels. The demand for electricity goes up in summer months, due largely to air-conditioning, which strains the grid. The NSW Government will commit $7.5-million in funding, to be matched by ARENA. This brings the total ARENA funding for its demand response competitive round to $30-million. NSW Minister for Energy Don Harwin said that this pilot showed that energy security is a key priority. - Energy Matters

Power industry maverick Trevor St Baker, founder of ERM Power, has come out in strident defence of coal for baseload power generation, saying that replacing it with renewables would just complete the job of pushing industry out of the country through sky-high prices. - Australian Financial Review

Coal on the Rise in China, US, India after Major 2016 Drop

The reasons for this year's turnaround include policy shifts in China, changes in U.S. energy markets and India's continued push to provide electricity to more of its poor, industry experts said. President Donald Trump's role as coal's booster-in-chief in the U.S. has played at most a minor role, they said. The U.S., China and India combined produce about two-thirds of the coal mined worldwide, and the latter two nations also import coal to meet demand. India's production expanded even during coal's global downturn. In India, where 70% of electricity comes from coal, production has long been increasing in defiance of global trends. The country has long argued it has both a right and an obligation to expand power generation as it extends electricity access to hundreds of millions of people who still have none. India also is seeking to reduce its reliance on imported coal by mining more of its own reserves. - The Chicago Tribune