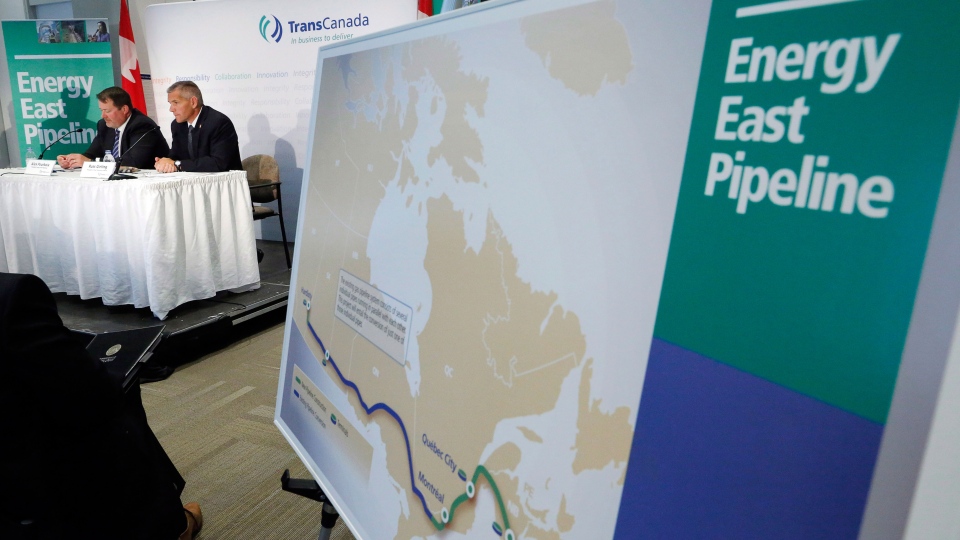 Canadian energy executives view TransCanada Corp.’s decision to scrap its $15.7-billion Energy East project on Thursday as just the latest multi-billion-dollar project cancellation in a string of abandoned energy proposals worth over $56 billion over the past year alone. Calgary-based TransCanada announced it would not proceed with its massive 1.1-million-barrels-per-day oil pipeline between Alberta and New Brunswick on Thursday after it had previously said it needed to understand the cost impacts of the federal Liberal government’s changing regulatory requirements. “After careful review of changed circumstances, we will be informing the National Energy Board that we will no longer be proceeding with our Energy East and Eastern Mainline applications,” TransCanada CEO Russ Girling said in a statement Thursday. - National Post

TransCanada’s withdrawal of its proposal to build the Energy East and Eastern Mainline oil pipelines is a huge loss to Canada and Canadian workers—a $16 billion project that was regulated to death. Let’s get the red herring out of the way up front. Yes, the low world price of oil was surely part of this decision, but it’s certainly not all of it. The United States is getting its pipelines built despite the world oil glut. Rather, a series of events killed these two pipelines. Firstly, while Energy East waited for approval, other pipeline projects were approved. Keystone XL finally won the White House’s approval, the Trans Mountain expansion, and the Line 3 rehabilitation (assuming it proceeds). If they all come to pass, they are estimated to have a combined capacity to meet export needs out to 2040. - National Post

A murder mystery: Why was the Energy East pipeline killed? —  Graham Thomson

It ended not with a bang or even a whimper, but with a frustratingly vague news release. Does it mean the depressed price of oil made the line uneconomical? Or did the new environmental review process at the National Energy Board prove one obstacle too many? When asked to clarify why it killed a project that would have pumped Alberta oil to New Brunswick for shipment overseas, a company spokesman offered an equally unhelpful response: “We are not going to be providing any further comment today beyond the news release.” - Edmonton Journal

An Atlantic Canadian pipe dream came to an abrupt end first thing Thursday morning, and it’s sparked plenty of reaction. New Brunswick Premier Brian Gallant said recent changes to world market conditions and the price of oil negatively impacted viability of the project. Still, Gallant is calling the decision disappointing. “We understand that there has to be a robust, independent and exhaustive process to look at these things,” Gallant said, “but there’s no doubt that we as a country have to ask ourselves at one point, how can we do that and all the while make sure we can make these types of decisions in a more timely fashion?”  Former New Brunswick Premier Frank McKenna said he felt a “profound sense of sadness for Canada” following the decision. “I think the burden just became too much to bear for any company,” said McKenna. “This is systematic of what we’re seeing in resources across the country.” - CTV News

Premier Brad Wall, the construction industry and municipal leaders in oil-producing regions blasted the federal government, accusing it of causing the pipeline's demise. TransCanada announced the cancellation of the Energy East pipeline project, which would have carried oil from Alberta and Saskatchewan to New Brunswick, on Thursday. Ninety per cent of the converted pipeline in Saskatchewan would have been on private land, with the remaining 10 per cent on Crown land. - CBC

Dreams and fantasies die hard, especially ones that have little or no basis in reality. Many of us may imagine ourselves as sports stars or corporate CEOs or Nobel scientists, but we all must come to terms with who we really are and the circumstances of our lives. Few of us are the next Jose Bautista or tomorrow’s Angelina Jolie. So it is with nations whose people must at times learn that their national destiny is not as they once imagined. Canada is one such nation and Energy East is one of those times. TransCanada Corporation’s decision to terminate the Energy East pipeline to ship oil from Alberta to the East coast and beyond means that Canada must now seriously begin to give up on what may always have been an impossible dream. Canada is not and may never become a global energy superpower. The political and environmental fevers unleashed by the termination decision should not be allowed to dominate the debate over Energy East, a project that maybe looked somewhat feasible when political circumstances were different and oil was trading at $120 a barrel. - National Post

TransCanada’s cancellation Thursday of the Energy East pipeline may be a victory for myopic environmentalists, but it is also an indictment of the Trudeau Liberals. Under Justin Trudeau’s leadership, the Liberals imposed stringent greenhouse gas regulations on TransCanada that do not apply to foreign entities — including those ruled by despots and human-rights abusers — that are shipping crude by ocean-going tankers for off-loading at Canada’s east-coast ports. So, it was hardly a level oil field. It has not been a good week for the prime minister. On Wednesday, Trudeau was embarrassingly berated on Parliament Hill by First Nation demonstrators over his government’s undeniable botching and projected indifference concerning the inquiry into murdered and missing indigenous women and girls. - Toronto Sun

Canada’s environment commissioner Julie Gelfand delivered a stern warning to the federal government this week, declaring that to deal with climate change Ottawa needs to move “from a seemingly endless planning mode into an action mode.” That will mean more than just putting a price on carbon — to date the only element in the Liberals’ pan-Canadian climate change framework that’s received much attention. The government’s plan also includes a suite of lesser-known policies, including a proposed clean fuel standard that some say amounts to a second carbon tax. The new standard, likely unknown to most Canadians, could actually have more of an impact than a carbon price in cutting Canada’s carbon emissions to 30 per cent below 2005 levels by 2030, according to some experts. The government is expected to release a framework for the clean fuel standard this fall, but in a discussion paper published in February, it suggested the standard would require a 10 to 15 per cent reduction in the carbon intensity of fuels used in transportation, homes and industry. – National Post

Electric cars, the vehicles of choice for the virtue signallers among us, epitomize the confusions and the divisions in society. These vehicles aren’t environmental exemplars, as their touters claim. And they of course aren’t economic. They excel in one area above all: in exploiting rural regions and their inhabitants, mostly for the benefit of affluent urbanites. Electric vehicles — now a trivial proportion of cars on the road — do benefit the urban environments in which they operate, by limiting harmful vehicular emissions such as NOx, SOx and ground-level ozone. If electric vehicles ever obtained a broader market, that urban benefit would increase. But it would come at a much greater cost to the rural environment, which electric-vehicle proponents would seek to sacrifice to provide the cities with electricity for charging. - National Post

Members of the U.S. House next week take up a measure on offshore drilling that advocates say checks off the wish-list for the oil and gas industry. The House Natural Resources Energy and Mineral subcommittee scheduled a hearing for Oct. 11 to take up the Accessing Strategic Resources Offshore Act, or ASTRO. President Donald Trump has put oil, gas and coal at the forefront of his energy policies in an effort to advance an already-robust sector of the U.S. economy. In August, House Committee on Natural Resources Chairman Rob Bishop, R-UT, said, with Trump in office, "the time is now to make the U.S. energy dominant." - UPI News

No one company, government or politician can make the energy transition alone  — Andrew Vessey

There's no question that energy prices have risen substantially and a united approach is needed from industry, government and regulators to make energy more affordable, reliable and sustainable. It's challenging but it can be done and we're seeing some positive signs. There's agreement on 49 out of the 50 recommendations of the Finkel reforms, including the need for a minimum three years' advanced notice for closure of coal plants to avoid the price spikes the market has seen by the sudden withdrawal of other capacity. Spot electricity prices have moderated from extreme highs earlier this year and forward prices indicate lower wholesale prices, as the market responds to the need for new supply. More than 4.5 gigawatts of new wind and solar projects are under development in Australia, with more than that again of new gas and renewable projects having been given planning approval. - Australian Financial Review