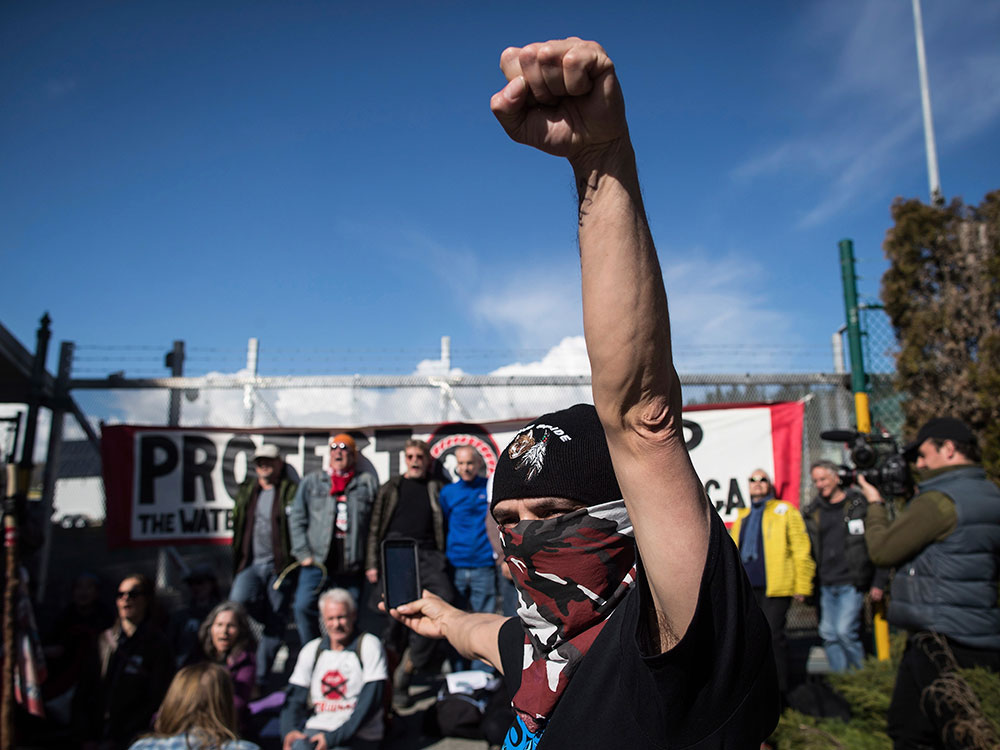 Who has authority to decide Canadian energy policy - governments or green-machine protesters? We had an answer to that question on Sunday when Kinder Morgan announced that the relentless harassment of its proposed pipelines has moved the company to the very edge of outright cancellation. The Trudeau government’s preferred role has been to sit mute and complacent, while tens of thousands of jobs and Canada’s energy security is on the line. The global climate file is the real “industry” Trudeau’s government backs, and its near desperate desire to play the hero at Paris and Davos has come at the expense of Calgary and Fort McMurray. If the Trans Mountain pipeline had been given one-hundredth of the publicly voiced support the Liberals gave to their deep hearts’ concern over tendentious global warming, we would not have had the Sunday announcement. - National Post

Brian Porter, CEO of Bank of Nova Scotia, is warning that the cancellation of the Trans Mountain pipeline project would be damaging to the country’s economy and competitiveness. He called the expansion “very important” to Canada, and urged the parties steering the project to surmount the current roadblocks and move forward. Scotiabank is one of several banks committed to financing the project, and Mr. Porter reiterated Scotiabank’s support Tuesday for “thoughtful energy development.” He stressed the energy sector’s importance to “some people’s standard of living.” - Globe and Mail

I’m from the government and I’m here to help. These nine words aren’t something the oilpatch typically wants to hear from governments. But these aren’t typical times when it comes to the energy sector and efforts needed to get pipelines built in this country. Petroleum producers and energy executives who generally eschew government intervention are now grappling with the prospect of provincial or federal investment in their sector. Opinions are mixed, although many say they’d welcome the Notley or Trudeau governments taking some type of financial position in the embattled Trans Mountain pipeline expansion to get it built. Two of the sector’s main lobby groups both back Premier Rachel Notley’s suggestion that Alberta become financially involved, if that’s required to see it completed. - Calgary Herald

If the last few weeks of the Trans Mountain pipeline saga have shown anything, it’s that politicians are probably the last people you want around in a crisis. Dealing with a matter that threatens to spiral into an economic and constitutional disaster for Canada, political leaders in both Edmonton and Ottawa have responded with plenty of talk and precious little action. Other than Alberta’s short-lived wine ban that was dropped too soon, the only decisive move in recent weeks has come from Kinder Morgan itself. Understandably fed up with interminable obstruction from the government of British Columbia, the company dropped a bombshell ultimatum Sunday, giving notice it will scrap the expansion unless its conditions are met by May 31, including an end to B.C.’s legal and political roadblocks. In contrast to this private-sector decisiveness, politicians responded to the emergent crisis with yet more blather. - Edmonton Journal

The proposed Trans Mountain heavy-oil pipeline from Alberta to the Pacific coast has law, economics and the Constitution on its side. It has been approved by the NEB, First Nations have been consulted, and the project would boost Alberta’s and Canada’s economies. But there is one thing barring it - the danger imposed by climate change - and that is a deal breaker. The pipeline supports Alberta’s troubled oilsands industry, which releases great amounts of greenhouse gas emissions. Governments in this country have been trying to put in place measures to reduce emissions marginally while still pushing pipelines. But you cannot have it both ways. If this dispute is to be handled by law alone, then pipeline proponents have the edge. But anti-pipeline protesters have already shown they are willing to face arrest to make their point. Law might not be enough. - Toronto Star

Canada’s Ecofiscal Commission released a report on carbon pricing last week along with survey results from polling firm Abacus Data gauging Canadians’ support for fighting climate change. The results showed that most Canadians don’t know much about carbon prices - the debate is still largely an “elite-level discussion,” according to the report. Ironically, at no point in the 142-page survey do they ask Canadians about any specific prices. Asking Canadians something as simple as “would you be willing to pay $10 more for a tank of gas?” or “would you be willing to have the cost of groceries rise by 30%?” would go a long way to illuminating what kind of “action” Canadians want governments to take. Carbon taxes are a deliberate attempt to force lifestyle changes through cost increases. From a political standpoint, telling people this is problematic. So people support “action” - as long as it doesn’t cost too much. - National Post

A carbon tax - on two conditions only —  Germain Belzile

If the government is committed to intervening to reduce greenhouse gases, then putting a price on carbon, by using a tax or by allocating carbon credits, is a more efficient way of achieving this goal than handing out subsidies for specific measures like the purchase of electric vehicles. Most economists believe that the harmful effects of pollution can be reduced through the creation of a cost for emitters, which allows the market to find solutions. Admittedly, GHG taxation is not a popular idea. This is mostly because the price of carbon will have to be set very high in order to succeed in significantly reducing GHG emissions. In order for a carbon tax to be really successful it would have to be implemented everywhere, so competition isn’t created. If a carbon tax is to be a good policy, it must be applied everywhere, and it must be revenue neutral. - Toronto Sun

Ontario’s environmental watchdog Environmental Commissioner Dianne Saxe noted Tuesday that the government’s own climate-change legislation requires a weaning off of fossil fuels by 2030. This would call for radical changes in behavior. Saxe said the government’s Long-Term Energy Plan unveiled last October does not take into account the dramatic change required to curb carbon emissions that scientists say contribute to climate change. That’s because the energy blueprint calculated that demand would remain stable even though the Liberal government is subsidizing electricity to keep hydro rates lower as Ontarians head toward a June 7 election. Environment Minister Chris Ballard defended the government’s record on the file, saying that “Ontario has a very comprehensive plan to fight greenhouse gas emissions.” - Toronto Star

Bottlenecks on the U.S. natural gas super-highway are starting to stack up, raising the concern about whether infrastructure can be built fast enough to meet surging supplies. Gas output will expand by 24-billion cubic feet (680-million cubic metres), or 32%, to the end of 2025 from last year, according to U.S. Energy Information Administration (EIA) estimates. To support that growth, the country’s gas industry needs to spend $170-billion over the next seven years on pipelines, compressor stations, export terminals and other related infrastructure, said Meg Gentle, CEO of gas exporter Tellurian. - Business Live

Drivers will pay the highest gasoline prices this summer since 2014 as record demand combines with higher crude prices to raise costs, according to a government forecast. The U.S. Department of Energy projects gasoline will average $2.74 a gallon, topping last summer's average by 32 cents. The increase is anticipated to again boost average fuel spending for the second consecutive year since the plunge in crude oil prices in late 2014.  The Energy Department anticipates that U.S. households will spend an additional $190 on gasoline this year, about 9% more than last year. - Chron

Why do politicians think that there are votes in coal? — Matthew Warren

The electricity grid that supplies power to Australia's populated east coast is one of the biggest machines on earth. It is troubling that in 2018 its future risks being determined by the vagaries of political ideology. Apparently we have to save the coal-fired power industry – by building new coal-fired power stations. Which is curious because the Australian Energy Council effectively represents this industry, and as far as we can see no one here has issued an SOS. Coal-fired electricity generators have been the backbone of Australia's electricity supply for the past century. We still derive around 75% of our power from them. Our members own them and run them. They will continue to supply electricity well into the 21st century. As a result of our dependence on coal, Australia has one of the highest greenhouse emissions intensive electricity systems on the planet. Building new high-emissions plant with a life of 50 years is risky. Building it in an economy which needs to cut its emissions more significantly is even riskier. - Australian Financial Review