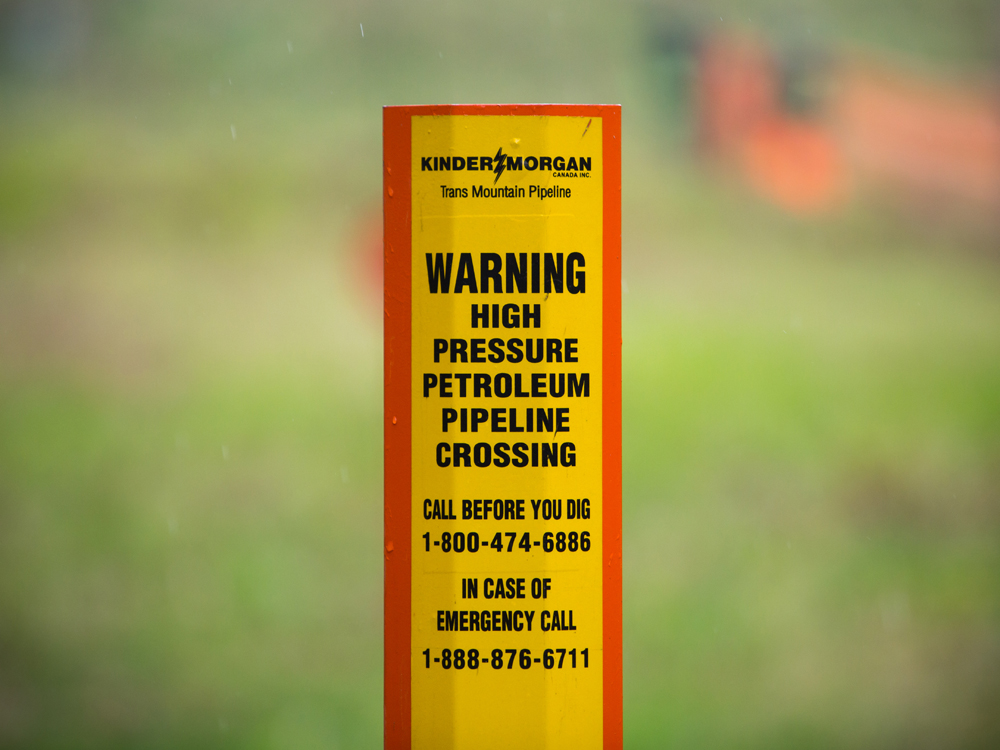 Prime Minister Justin Trudeau will sit down Sunday with B.C. Premier John Horgan and Alberta Premier Rachel Notley in an effort to hash out a solution to the ongoing dispute over the Trans Mountain pipeline project. Trudeau, who is on his way to Peru for the Summit of the Americas, will return to Ottawa for the meeting before resuming his travels to Paris and London, spokesperson Chantal Gagnon said Thursday, just moments before the prime minister’s flight took off. Tensions over the pipeline impasse reached a new peak this week when Kinder Morgan stopped all non-essential spending on the expansion project, pending reassurance from the federal government that the project would be going ahead. Trudeau had an emergency cabinet meeting on Tuesday where ministers discussed – but did not settle on – options for action, including whether to help finance the project or pull funding from B.C. to help convince Horgan to stop blocking the project. - National Post

Alberta Premier Rachel Notley says she will attend a meeting about the Trans Mountain pipeline in good faith and with an open mind, but the bottom line is the expansion project must get built without delay. Notley also says she will bring in legislation next week that would allow her to curtail oil shipments to British Columbia – regardless of the outcome of her Sunday meeting with Prime Minister Justin Trudeau and B.C. Premier John Horgan. Such action is expected to cause gas prices and other costs to spike in B.C. - Winnipeg Free Press

Trudeau must lead on both pipeline and climate change — editorial

The Trudeau government has positioned itself as taking the “middle way” in the increasingly bitter fight over whether to build a pipeline that would give Alberta oil an outlet to the sea. The Liberals are being targeted by both those who would give the energy companies a free pass and those who will never approve any pipeline under any circumstances. Trudeau however is right that green-lighting Trans Mountain must be part of a meaningful national approach to the pressing issue of climate change. That involves, among other things, putting a price on carbon and making sure Alberta is part of the solution. Attempting to simply shut down the biggest energy-producing province won’t work and would be disastrous for national unity. - Toronto Star

B.C. Liberal house leader Michael de Jong accused NDP Premier John Horgan of isolating the province by stalling the federally approved Trans Mountain expansion and that B.C.’s “reputation” for respecting the “rule of law stands in tatters,” just hours after business leaders warned that “faith in democracy” was at risk if Horgan didn’t back down. Business Council of British Columbia CEO Greg D’Avignon was one of dozens of business leaders who issued a scathing letter Thursday demanding Prime Minister Justin Trudeau intervene when he meets with Premier Horgan and Alberta Premier Rachel Notley on Sunday for emergency talks. It is possible much of this was just rhetoric meant to prod the federal government into action. However, Premier Notley said she plans to table legislation allowing her to cut off oil flow to B.C., and has asked Ottawa to halt health and other federal transfer payments to the Horgan government. - Toronto Star

Financially backing or buying the Trans Mountain pipeline expansion would be a bad investment for the Alberta government, say political and industry watchers. The NDP government would be taking an enormous financial risk in bankrolling the Kinder Morgan project – and the investment would do nothing to quell the unwavering political opposition that has stalled its construction. "The primary risk is monetary, for the same reason that private investors are pulling out, or are thinking of pulling out," said James Coleman, a professor of law at Southern Methodist University in Dallas. - CBC News

Sask. not yet looking at taking an equity stake in Trans Mountain pipeline — D.C. Fraser

Saskatchewan Premier Scott Moe says the province has not yet had a conversation about taking an equity stake in Kinder Morgan’s suspended Trans Mountain pipeline project. On Sunday, Kinder Morgan said it was cancelling plans to nearly triple the capacity of the Trans Mountain pipeline unless legal and jurisdictional challenges were solved by May 31. Non-essential spending on the project has stopped. Alberta is pledging financial support for the struggling pipeline expansion, with Premier Rachel Notley saying her province would outright buy the project from the Houston-based Kinder Morgan in order to get it built. - Saskatoon Star-Phoenix

After three straight years of losses, Canada’s oil industry is expected to return to profitability this year. In a Thursday report, the Conference Board of Canada estimates the domestic oil industry will enjoy a slim 1.5% profit margin in 2018 – that’s $1.4-billion in profits on $92-billion in revenues – after years of heavy losses. In contrast, oil producers posted cumulative losses of $32-billion over the course of the last three years as revenues declined sharply following the global collapse in oil prices. But even as the energy sector rebounds from a three-year downturn, the Conference Board does not expect the Canadian oil sector to post the record $116-billion in revenue it did in 2014 – when oil prices were over US$100 per barrel – until 2021, when it is expected to pull in $119-billion. - National Post

Poor decision-making by the Ontario government caused electricity costs to soar in recent years, hurting residents and hampering the competitiveness of the province’s manufacturing sector, the Fraser Institute argues in a new report. The report, published Thursday, says Ontario’s residential electricity costs spiked 71% between 2008 and 2016 – far outpacing the 34% average growth seen across the country. But it’s not just residents who felt the sting of rising costs. Large industrial users in Toronto experienced a 53% jump in costs, while those in Ottawa saw a 46% boost. That compares with an average increase of 14% for the rest of Canada, according to the report. The price hikes are responsible for roughly 75,000 job losses in the province's manufacturing sector from 2008 to 2015, according to the report. The research comes ahead of a provincial election in which electricity prices are likely to be a hot topic. Progressive Conservative Leader Doug Ford vowed Thursday to fire Hydro One’s CEO Mayo Schmidt and the utility’s board of directors if he’s elected premier. - Globe and Mail

The Ontario Energy Board has rejected Hydro One’s application to purchase the Orillia Power Distribution Corp. Hydro One had announced a deal to acquire the utility company for $41.3-million in 2016. The figure included the assumption of about $14.9-million in OPDC debt. In its decision, the OEB said it applied a “no harm test” to assess the deal and was not satisfied that the test requirement had been met. Hydro One had said the deal would result in a one per cent reduction in base delivery rates for Orillia Power’s customers in years 1 to 5 and rate increases of less than the inflation rate in years 6 to 10. The utility also said the consolidation would result in ongoing cost savings of approximately $3.9-million per year and reduced capital costs of about $600,000 per year. The OEB said, however, that while it agreed that the deal would “reasonably be expected to result in overall cost savings and operational efficiencies,” they might not necessarily translate to lower rates for customers in the long run. - Globe and Mail

The head of a Canadian company recognized in a $20-million global pollution challenge sponsored by oilsands giants is offering a remedy to climate tax deniers: just take a look at his business. “People think about taking action on the environment, specifically climate, as being costly,” said Robert Niven. “But like our company, there are opportunities where it’s quite the opposite: you can make quite a lot of commercial gain, to benefit the environment." Niven is the CEO of Halifax-based CarbonCure, which takes carbon pollution captured by industrial emitters and injects it into freshly mixed concrete. The company says this creates a more durable product, which in turn lowers the operating cost of concrete producers. The firm has retrofitted close to 100 facilities across North America, it said, and is attracting interest from Europe, India, the Middle East and China. It has also attracted political interest, at the provincial level in Alberta and at the federal level under both Prime Minister Justin Trudeau and former prime minister Stephen Harper. - National Observer

New Jersey significantly altered the future of its energy sector on Thursday, passing two bills that set ambitious goals for expanding renewable power and curtailing greenhouse gases in the state. The bills, which require power companies in New Jersey to generate 50% of their electricity from renewable sources by 2030 and subsidize existing nuclear power plants, mark one of the biggest new policy steps that any state has taken toward cutting greenhouse gases since President Trump was elected. The central piece of legislation, Assembly Bill 3723, sets the renewable energy goal and anchors much of the growth in wind and solar energy, aiming to hit 35% renewables by 2025 and eventually 50% by 2030. That goal would pull New Jersey in line with some of the leading states on the issue, like New York and California. - New York Times

The average American household is expected to pay about $200 more on gas in 2018 than in 2017, the U.S. Energy Information Administration projected Thursday. It's "going to impact motorists' pocketbooks and wallets for spring and summer, with the hope of them coming down in fall and winter, as we’ve seen in years past," AAA spokesperson Jeanette Casselano said. The price of fuel is the highest it has been in nearly 1,000 days, according to smartphone app GasBuddy, which allows consumers to see gas prices at nearby stations. - USA Today

Household power prices in NSW – already among the world's highest – are set to rise again in New South Wales this year despite energy minister Josh Frydenberg urging energy retailers to take advantage of falling wholesale electricity prices and cut their tariffs. Stockbroker Bank of America Merrill Lynch said NSW retail power rates were set to rise by 3% to 4% in July based on its analysis of wholesale prices and the likely approach of big retailers AGL Energy, Origin Energy and EnergyAustralia to setting tariffs. This will be much smaller than last year's increases of 14-19%, which were fuelled by a surge in wholesale prices triggered by the closure of Hazelwood brown coal power plant in Victoria and a series of outages in NSW and South Australia. But that will be little comfort to Mr. Frydenberg, who will be trying to steer the Turnbull government's National Energy Guarantee policy aimed at curbing power prices through a skeptical Council of Australian Governments energy ministers' meeting next Friday. - Australian Financial Review