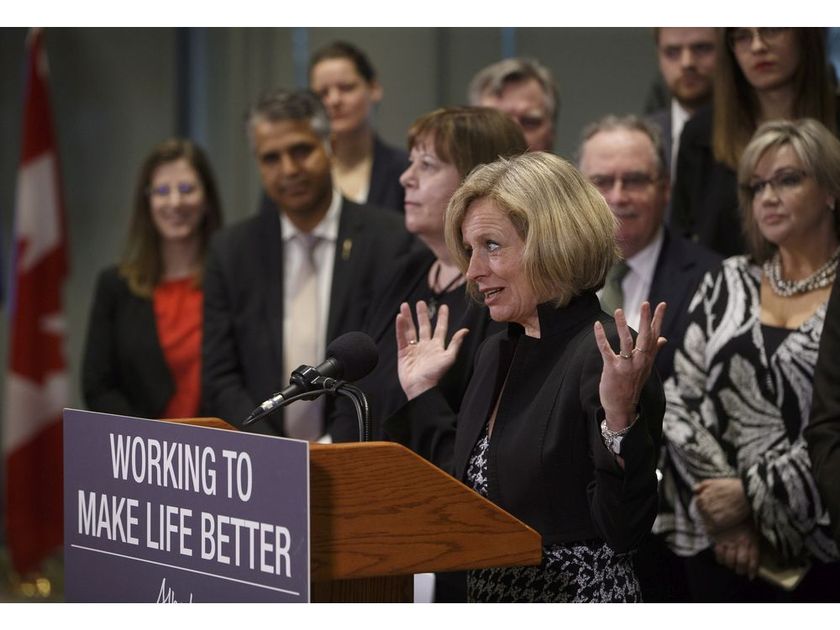 So, can Alberta Premier Rachel Notley actually turn off the energy tap to B.C.? — Gordon Hoekstra

In a last effort to save Kinder Morgan’s $7.4-billion oil pipeline expansion, Alberta Premier Rachel Notley introduced legislation on Monday that would allow the province to cut the flow of crude and fuel to B.C. if B.C. Premier John Horgan’s government doesn’t halt its opposition to the project. The Alberta government claims this is legal according to Section 92 of the Canadian Constitution that gives provinces power over their natural resources. B.C. Attorney General David Eby has a different view, calling the legislation illegal. Bill 12 would require companies in Alberta to obtain a licence from the government to send crude oil, natural gas or refined fuels such as gasoline out of the province in any direction and on any form of transportation, including pipelines, railway cars or trucks. Companies that break the law would pay up to $10-million per day. Shipments of refined products through the existing Trans Mountain pipeline could be cut off. - Vancouver Sun

Economic damage will extend far beyond the fuel budgets of B.C. residents if Alberta passes and enacts a bill allowing it to restrict exports of oil, natural gas and refined fuels to the province as part of its ongoing pipeline dispute, observers say. The Bill 12 legislation and the trade war escalation it might spark would damage Albert and Canadian businesses and citizens as well as those in British Columbia, warned Greg D’Avginon, CEO of the Business Council of B.C. D’Avignon pointed out that Alberta and B.C. have the most integrated economies in Canada and if the costs rise on goods in B.C., they will rise in Alberta. By restricting oil shipments into B.C., Alberta will raise the price of gasoline even higher in the province. - Toronto Star

A carbon tax could cost the City of Whitehorse $126,000 in direct costs in its first year of implementation, if it comes into effect on January 1, 2019, says the city’s director of operations Peter O’Blenes. O’Blenes says it’s still not clear how municipalities will fit into the carbon pricing scheme. The tax will go up each year until 2022, when it will cost $50 a carbon tonne. O’Blenes says the tax could eventually cost the city $324,000 by 2022. He also says it’s not clear if the city will be provided any rebates. The Yukon Liberals campaigned in 2016 on a promise that all carbon tax money collected in the territory would be returned to Yukoners. - CBC News

As Conservatives call for more carbon tax data, Ottawa delivers analyses – but only to the territories — Maura Forrest

Amid criticism from the Conservatives that it has failed to provide enough information about the possible impacts of a price on carbon dioxide, the federal government has prepared analyses of how much its carbon tax would cut emissions and increase costs – but it has prepared them only for the three territorial governments. The analyses were completed as part of a commitment Environment Minister Catherine McKenna made last year to study the impacts of carbon pricing in northern Canada. But observers on both sides of the carbon dioxide tax debate say Ottawa should be conducting similar work for the provinces. “I think there’s justification for calling for clear, transparent analysis of what we can expect,” said Dale Beugin, executive director of Canada’s Ecofiscal Commission, which supports carbon pricing. “They have the capacity to do that analysis.” - National Post

Imagine, for a moment, a country where climate action, accountability and social justice are required for a healthy economy. The 2018 federal budget has been criticized by fiscal conservatives for failing to pay down the debt during a prosperous period. But since the health of the economy is dependent upon a stable climate, shouldn’t we also be concerned about carbon? What if our budget also kept Canadians apprised of our progress towards meeting international climate commitments? And what if Canada’s carbon budget was taken seriously enough that exceeding the carbon budget, like the fiscal budget, resulted in a debt that could only be erased by spending that improved the well-being of vulnerable communities within our country and abroad? If you are having trouble imagining this, try harder. Because this is exactly how seriously we need to take the climate challenge. - National Post

Running on empty: Foreign shipments of fuel to B.C. would ease pain of Alberta cuts to energy exports — David Ebner

Any move by Alberta to restrict the supply of oil and gasoline to British Columbia in the fight over the Trans Mountain pipeline expansion would have a limited effect on the price of gas in the province as supply would arrive from suppliers elsewhere in the world, one industry expert says. Michael Ervin, an analyst at the Kent Group, said predictions of a gasoline apocalypse are overstated, saying an increase of about 10 cents a litre was a likelier outcome. If prices spiked by much more, gasoline supplies from the U.S. Pacific Northwest, California and overseas in Asia would be drawn to B.C. - Globe and Mail

Prime Minister Justin Trudeau is “lying in the bed he made” in the national feud over Kinder Morgan’s Trans Mountain pipeline expansion, the City of Burnaby’s lawyer says. Greg McDade, lead counsel in the municipality’s ongoing legal challenge against Ottawa, said talk of a constitutional crisis is “ridiculous” because the federal process that green-lit Kinder Morgan in the first place was “flawed.” Trudeau’s government approved the $7.5-billion pipeline expansion, which would nearly triple the flow of diluted bitumen from Alberta’s oilsands to a Burnaby terminal, in 2016 after undergoing review by the federally appointed National Energy Board. “As I listen to the debates on the so-called constitutional crisis, with Ottawa thinking about ramming this down B.C.’s throat … the bottom line is we got here because the NEB process had no credibility whatsoever,” McDade said in a phone interview. “We don’t have a constitutional crisis – we have a crisis of confidence in a process that was flawed from the get-go.” - Toronto Star

Canada’s energy sector is conflicted about the Notley government’s tough new bill to let Alberta choke off the supply of oil to British Columbia. The oilpatch wholeheartedly supports Kinder Morgan’s Trans Mountain pipeline expansion, which will triple the amount of Alberta crude shipped to the West Coast. Yet, they’re concerned political action by Alberta could sideswipe their business in the short term. That’s why the provincial government is promising further consultations with industry – and isn’t ruling out providing compensation to companies affected by the new legislation. Alberta’s Bill 12 (introduced Monday) serves as the legislative brass knuckles to make sure the project proceeds without more unexpected hindrances from B.C. Premier John Horgan’s government. The energy sector is generally on board with Alberta’s response, but anxious about how it could affect them. - Calgary Herald

Canada’s latest greenhouse gas inventory report to the United Nations, made public on Tuesday, shows emissions are starting to trend downward, but not nearly at the rate needed to meet the country’s international commitments under the Paris climate change accord. Canada and France signed a partnership agreement on climate this week, agreeing to help get other countries to agree to implement carbon dioxide pricing systems, improve energy efficiencies and cut emissions across all forms of transportation. But Canada is still quite a distance away from meeting its own commitments under the Paris Accord, the latest UN emissions filing shows. The report shows Canada’s emissions are down by 1.4% from the year before, still 187 million tonnes away from its Paris commitment to get emissions at least 30% less than they were in 2005 by 2030. - Globe and Mail

The oil field at the heart of the U.S. shale boom is hitting the limits of its growth faster than anticipated, a surprise with big ramifications for energy profits and global markets. The Permian basin of West Texas and New Mexico has been one of the few growth engines for oil production world-wide. The region’s output is on track to single-handedly rival that of Iran or Iraq and has lifted American production to all-time highs. Output is projected to climb from 3 million barrels a day to more than 4 million barrels a day within two years. The International Energy Agency forecasts that production will double by 2023. - Wall Street Journal

Michael Cantanzaro will be returning to CGCN Group, the law and lobbying firm where he worked previous to his position as a White House adviser for energy and environmental policy. Catanzaro had headed domestic energy issues for the White House’s National Economic Council. - National Post

Why Malcolm Turnbull's emissions target is a negative — Ben Potter

The Turnbull government looks set to win approval in-principle from states and territories for the architecture of its National Energy Guarantee at Friday's energy ministers meeting. But a key detail of the design – the target for the electricity sector to deliver carbon emissions cuts of just 26 per cent from 2005 levels by 2030, in line with the target for the entire economy – remains as a sticking point. - Australian Financial Review

Top oil exporter Saudi Arabia would be happy to see crude rise to $80 or even $100 a barrel, three industry sources said, a sign Riyadh will seek no changes to an OPEC supply-cutting deal even though the agreement’s original target is within sight. OPEC began to reduce supply in January 2017 in an attempt to erase a glut. They have extended the pact until December 2018 and met in June to review policy. There is no indication yet, however, that Saudi Arabia or its allies want to wind down the supply cut. Over the past year, Saudi Arabia has emerged as OPEC’s leading supporter of measures to boost prices, a change from its more moderate stance in earlier years. Industry sources have linked this shift in Saudi Arabia’s stance to its desire to support the valuation of state oil company Aramco. - Globe and Mail