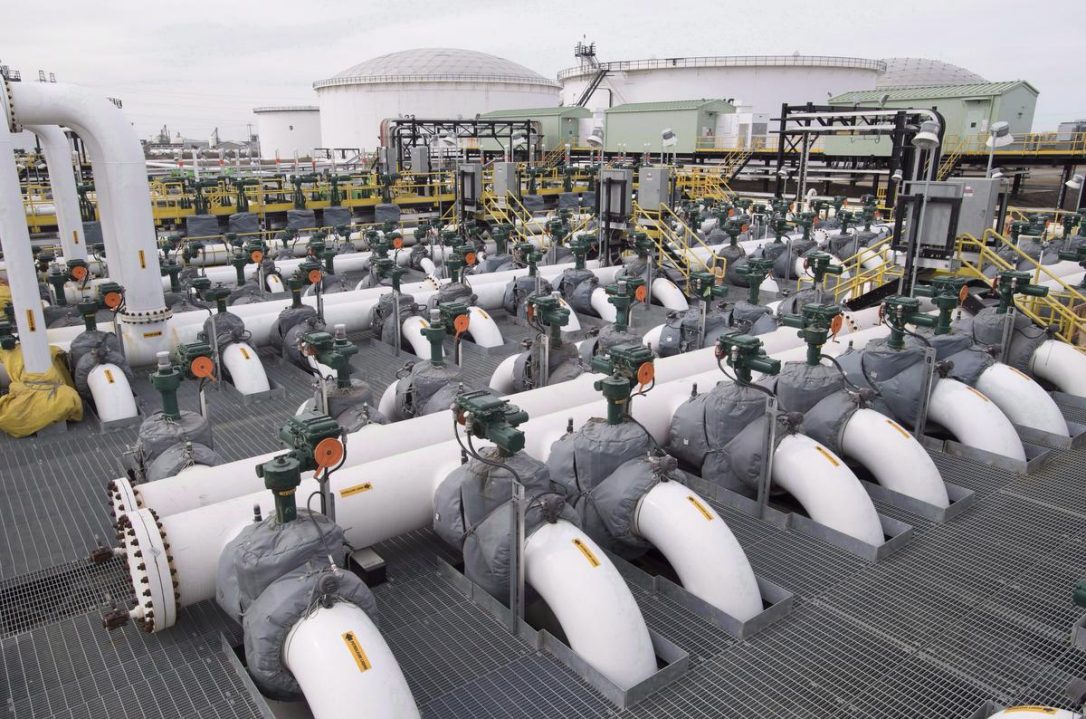 The proposed expansion of Kinder Morgan’s Trans Mountain pipeline has the support of more than half of British Columbians, but with plenty of caveats, including the minimal impact of threats from Alberta, according to a new poll. In an online survey conducted Monday and Tuesday of 2,125 Canadian adults — half from British Columbia — the Angus Reid Institute has found that support in B.C. for the project is up to 54%, a considerable jump from the 48% in a similar survey conducted in February. This support runs through all part of the province, with 50% of Metro Vancouver in favour, 54% on Vancouver Island and 60% of respondents in the rest of B.C. But support for the idea of a pipeline doesn’t mean British Columbians aren’t worried about its related impacts, according to ARI’s data. When asked to say which potential risk or danger related to the project they were most worried about, 52% of British Columbians listed an oil tanker spill or accident. - Financial Post

British Columbia will file a reference case in the provincial Court of Appeal by the end of this month to determine if it has jurisdiction over the Trans Mountain pipeline expansion project. Attorney General David Eby made the announcement Wednesday morning.  "Our goal from the beginning is to ensure that we are actually exercising the full extent of our jurisdiction, the full extent of our authority," he said. In Canadian law, governments submit a reference question to the courts to ask for an advisory opinion on a major legal issue. The court is obligated to hear cases that are referred by cabinet, Eby said. - CBC

Premier Rachel Notley has waved aside comments by Kinder Morgan CEO Steve Kean, who said late Wednesday he has seen nothing to change his mind over his company’s suspension of the Trans Mountain pipeline expansion project.  Kean told an earnings conference call that events in recent days have reinforced his concerns about the $7.4-billion project’s viability. His company suspended work on the project earlier this month because the investment may be “untenable for a private party to undertake.” Kean said developments over the last 10 days have “confirmed” those views. - Saskatoon Star Phoenix

It looks like Prime Minister Justin Trudeau’s emergency Trans Mountain pipeline took things from bad to worse. Last week it became clear we were on the cusp of a national crisis. Kinder Morgan had just announced they were putting the project on hold. They no longer wished to subject shareholders to further sunken costs. Instead, they wanted reassurance from government that uncertainty caused by B.C.’s uncivil disobedience would be addressed. Trudeau came home between his trips to Peru and England to sit down with the two rival NDP premiers, Rachel Notley of Alberta and John Horgan of British Columbia, to work through this dispute. At least that’s what everyone thought he would do. For the photo op, the three leaders were all smiles. Trudeau offered firm words on how the pipeline was indeed going to be built. Then he put forward his two-part action plan. The first was that Finance Minister Bill Morneau was going to sit down with Kinder Morgan to offer some kind of financial assistance. This caught many observers off guard. - Toronto Sun

The federal Liberal government hasn’t yet “landed” on its promised legislative option to push the Trans Mountain pipeline expansion forward, says Natural Resources Minister Jim Carr. Justin Trudeau’s government is “actively pursuing” legislation that will reassert Canada’s constitutional authority to build and expand pipelines, the prime minister promised Sunday after an emergency meeting with the feuding premiers of B.C. and Alberta. However, it hasn’t yet figured out what it will look like. - Calgary Herald

For Alberta’s NDP government, it must have been nice while it lasted. For a few hours Wednesday, the government was basking in a bit of good news. According to a new public opinion poll, Premier Rachel Notley has come out on top in the fight over the expansion plans for Kinder Morgan’s Trans Mountain pipeline. Well, she’s come out on top as compared to Prime Minister Justin Trudeau and B.C. Premier John Horgan. But, hey, these days the NDP will take what good news it can get on the pipeline front. - Calgary Herald

University of Alberta economist Andrew Leach is openly denouncing his employer’s decision to award an honorary degree to activist and broadcaster David Suzuki. But unlike many Albertans who have denounced the award because of Suzuki’s anti-oilsands politics, Leach’s issue is with how the former Nature of Things host has spent years defaming economics as “brain damage.” “There’s no way I’d share a stage with David Suzuki … not a chance,” Leach wrote in an extended Twitter thread describing an encounter with the environmentalist roughly 10 years ago. While at a conference where Suzuki was the keynote speaker, Leach saw Suzuki relate a favourite anecdote in which he claims that economics “teaches that environmental damage is to be ignored.” It is indeed a popular Suzuki speech topic. In the 2011 documentary Surviving Progress, Suzuki called economics “a form of brain damage” and a “pretend” science. Suzuki has also continually claimed that economics is directly at odds with environmental protection. A 2013 lecture he gave at Western Washington University was titled Time is Running Out: Ecology or Economics? - National Post

Climate change is one of the most serious issues we face today, and any politician refusing to deal with this will just make things worse in the long run. Across Canada, most of us understand this. The federal Liberal government signed onto the Paris Accord addressing climate change shortly after defeating the Harper government. This was welcome after the Conservatives had steadfastly refused to address the issue in any meaningful way. Each provincial government responded with its own ways to meet new federal requirements developed to implement the Paris Accord, or agreed to the federal carbon tax plan as a default. In Ontario, for example, the Kathleen Wynne government brought in a cap and trade system, which allows companies to buy and sell carbon credits, rather than impose the federal tax. Cap and trade systems give companies an incentive to cut emissions so the company can then sell excess credits to companies that can't meet the targets. - Huffington Post

An Opposition NDP MLA says his new bill aims to protect Manitoba tenants from rising rents while offering landlords incentives to make their buildings more energy efficient. Wolseley MLA Rob Altemeyer brought the bill forward in the legislature on Tuesday. It would require landlords who want to raise rents above the guideline set by the Residential Tenancies Branch to first show they have taken "reasonable steps to improve the energy, water and heating efficiency of their building," Altemeyer said. This year, the rent increase guideline was set at 1.3%. The bill doesn't specify what would qualify as reasonable improvements. Altemeyer said that would be determined by the government. As an Opposition MLA, Altemeyer can't bring forward any bills that include spending requirements, but he said the bill includes a call for government to provide financial incentives for landlords to improve their buildings. The bill faces an uphill battle to be passed into law, because the Progressive Conservatives have a majority in the Manitoba Legislature. - CBC News

'Without exports, our profits are in trouble': Hydro-Quebec plugs into U.S. markets for growth — Jesse Snyder

Éric Martel took over as Hydro-Québec’s chief executive in mid-2015 when the company’s troubles were apparent to even casual observers. Internal surveys showed employee engagement was at its lowest in years, public opinion of its customer services division was spiralling downward, and future profitability was threatened by a projected flattening of electricity demand, which would force power prices to rise—something consumers never like. “I said to the guys here, ‘We’re going to have a challenge in profitability, and we’re going to have a hell of challenge maintaining rates,” Martel recalled in a wide-ranging interview at Hydro-Québec’s Montreal headquarters. The new head of Canada’s largest utility, which generates more than 37,000 megawatts (MW) of electricity from 28 hydro reservoirs and 63 power stations, promptly laid out a plan to reinvigorate a bloated bureaucratic culture and, crucially, boost profits over the following 15 years with a firm commitment to double revenues, up to around $27-billion, by 2030. - Financial Post

In another blow to its recovery efforts, an island-wide power outage left most of Puerto Rico in the dark, with only a fraction of residents regaining electricity by Wednesday night. The latest blackout prompted Gov. Ricardo Rossello to call on the Puerto Rico Electric Power Authority (PREPA) to cancel its contract with the subcontractor that caused the massive outage. "I have suggested to the PREPA Board of Directors that they cancel the contract with the Cobra subcontractor who is directly responsible for this power outage," he said in a statement Wednesday. An excavator operated by D. Grimm, a subcontractor for Cobra Acquisitions, apparently caused the blackout, according to the authority. Workers had been removing a fallen tower when the machine got too close to an energized line and an electrical ground fault caused the outage, according to Mammoth Energy, Cobra's parent company. - CNN

The joint alert from the FBI and Department of Homeland Security last month warning that Russia was hacking into critical U.S. energy infrastructure may have shaken some Americans. But it came as no surprise to the country's largest grid operator, PJM Interconnection. "You will never stop people from trying to get into your systems," says PJM Chief Information Officer Tom O'Brien. "The question is, what controls do you have to not allow them to penetrate? And how do you respond in the event they actually do get into your system?" "This is a very large, orchestrated effort that goes unnoticed most of the time," says Donnie Bielak, a reliability engineering manager. "That's a good thing." - NPR

Coal, which fuelled the world’s biggest economies for more than a century, is increasingly losing out to renewables. The latest example of how one of the dirtiest fossil fuels is being squeezed out of the market came this week in Britain, which went for a record 55 hours without any of its power plants producing electricity by burning coal. No coal was used for power generation by stations in the U.K. between 10:25 p.m. in London on Monday until 5:10 a.m. on Thursday, according to grid data compiled by Bloomberg. At the same time wind turbines produced more power. The U.K. was an early adopter of renewable energy and has more offshore wind turbines installed than any other country. It also has fields of solar panels that are meeting more and more demand as old traditional power plants close permanently. The government aims to switch off all coal plants by 2025 and has given renewables priority access to the grid. - Toronto Star

The ability of a future federal Labor government to introduce tougher emissions reduction targets has helped win over Labor state governments to back the Turnbull government's National Energy Guarantee although there is expected to be heated discussions over the next few months finalising the details of the plan. State Labor governments are demanding the emissions reduction target for the electricity sector be increased to do more to cut Australia's carbon emissions and to make sure the NEG does not interfere with their respective state renewable targets. - Australian Financial Review