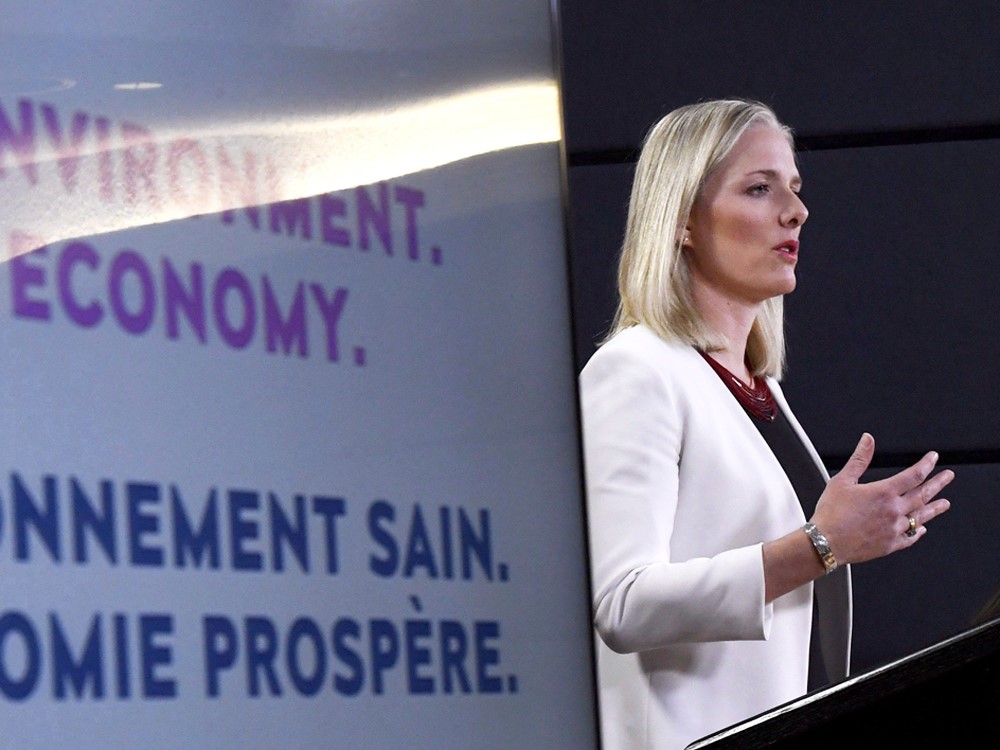 A new survey completed by Abacus Data for the Ecofiscal Commission shows that more than 4 in 10 Canadians said there is conclusive evidence that climate change is real, that it is being caused by people and that they believe addressing the problem should be a top government priority. However, even among this group, only two-thirds see a carbon price as the best way to curb greenhouse gas emissions, and fewer than half of them express confidence that they even know what carbon pricing actually is. The survey suggests to Ecofiscal’s chair Chris Ragan that governments have so far done a poor job communicating carbon-price policies to the public. What is clear, said Ragan, is that among those who believe in climate change and lowering emissions, they consider carbon pricing the best way to do it from an economic point of view. - National Post

Majority of Canadians in most provinces with carbon prices don’t know they have one: survey — Maura Forrest

Polling commissioned by Canada’s Ecofiscal Commission shows that a majority of respondents in British Columbia, Ontario and Quebec did not know that their province has a carbon price in place. Ontario’s cap-and-trade system only kicked off in 2017, but Quebec’s has been in place since 2013, while B.C. has had a carbon tax for nearly a decade. Only 45% of respondents in B.C., 30% in Ontario and 20% in Quebec knew that their province has put a price on carbon. Most of the rest either said they didn’t know, or that their provincial government is planning to bring in a carbon price. Uncertainty was the most common response from those surveyed in most other provinces as well. However, in Saskatchewan and Alberta, where political leaders have campaigned aggressively to cut a carbon tax, the majority of the population knew they were paying a price on carbon. - National Post

Catherine McKenna is getting a little testy. The incoming national carbon tax that she’s been promoting alongside Prime Minister Justin Trudeau is really taking a beating. An increasing number of mainstream political leaders are speaking defiantly against carbon taxes and are poised to bring millions of Canadian voters along with them for the ride. On an interview this week, McKenna said that she “does not have time for politicians that pretend climate change isn’t real.” But that could be an issue with Jason Kenney in Alberta, Scott Moe in Saskatchewan, and Doug Ford in Ontario all leading the fight against a carbon system. - Toronto Sun

Canada’s EcoFiscal commission says that New Brunswick’s plan doesn’t measure up to federal requirements and will likely lead to a federal imposed price on emissions next year. The report’s lead author said New Brunswick’s shifting of part of its existing gasoline tax into a climate fund won’t achieve that because it doesn’t impose a higher cost on carbon dioxide emissions. Starting this week in New Brunswick, 2.3 cents of the existing 15.5 cent-per-litre gas tax is being diverted into a climate fund, effectively creating a carbon tax that doesn’t force drivers to pay more. Premier Brian Gallant has argued a new carbon tax with an additional cost for consumers isn’t needed because New Brunswick has already reduced emissions. - CBC News

The auto industry wants Prime Minister Justin Trudeau to go along with U.S. President Donald Trump’s move to weaken fuel efficiency standards for cars and light trucks. Environmentalists want Trudeau to refuse, immediately, and join forces with liberal American states. The Trump administration’s decision to abandon the current Obama-era standards puts Trudeau in the position of choosing between the goal of rapidly reducing emissions and the goal of keeping Canada’s car regulations in sync with those of the United States. Trudeau’s government declined Tuesday to offer an opinion on the Trump decision. - Toronto Star

Imperial Oil Ltd. has put a natural-gas property in British Columbia on the block in the latest example of a major producer paring exposure to Canada. Imperial and its partner in the development, Exxon Mobil Corp., are selling their horn River shale-gas asset in the province’s northeast corner. Exxon owns a majority stake in Imperial. The latest move by the Calgary-based company comes amid a broad retreat from Canada by the world’s largest energy companies, a pullback that has sparked fears the country is losing ground to the United States in attracting investment in energy projects. - Globe and Mail

‘Why bother?’: Oilpatch prospects brighter, but no one can be convinced to buy Canadian energy stocks — Dan Healing

Prospects are looking brighter in the Canadian oilpatch as commodity price increases drive higher profits and afford companies room to offer dividend hikes and share buybacks – but slumping stock prices show that the oil and gas sector remains in the penalty box with investors. It’s getting so bad that not even Canadian institutional investors can be convinced to buy Canadian energy company shares, says Grant Fagerheim, CEO of Calgary-based Whitecap Resources Inc. “We want to get Canada back, to be proud Canadians, to be proud producers of our own products and not be penalized for it,” said Fagerheim in an interview after returning from disappointing meetings with investors in New York last month. “The question we are continually asked, whenever I’m on the road, is, ‘Why would we invest in Canada right now, when there isn’t a consistent policy on energy or the economy?’ - Cold Lake Sun

Alberta Premier Rachel Notley says she will soon head to Toronto and New York to rally support among business leaders for the Trans Mountain oil pipeline expansion. Notley says she will also take her message to a meeting of U.S. and Mexican governors and Canadian premiers in Scottsdale, Ariz., in early May. Details of who the premier will meet with and when have not been released. The premier said it's imperative to keep up pressure to get the Trans Mountain expansion completed so that more oil can move from Alberta to the coast. "Economic leaders in this country must speak out with resolve and purpose," Notley said Tuesday during the public portion of a meeting with her NDP caucus. She said leaders need to find a middle ground as they balance economic management with environmental stewardship. - Chronicle Herald

Remember this 2012 comment from former Word Wildlife Fund Canada (WWF) CEO Gerald Butts? “Truth be told, we don’t think there ought to be a carbon-based energy industry by the middle of this century. That’s our policy in Canada and it’s our policy all over the world…” Butts is now the principal secretary, main advisor and long-time friend of Prime Minister Justin Trudeau. Somehow, I can’t imagine Butts saying there shouldn’t be an aerospace industry in Canada by the middle of the century, or an auto manufacturing industry in Canada, or a cement, steel or aluminum production industry in Canada. - Global News

The federal government plans to provide greater certainty for oil sands and pipeline developers that they won’t be held back by concerns about greenhouse gas emissions so long as they fit under Alberta’s existing regulatory plan. Industry has raised concerns that Ottawa’s proposed environmental assessment regulations will impose a tough climate test, creating new uncertainty for energy project developers. However, Ottawa and the Alberta government are discussing ways to exempt many oil sands projects from federal reviews altogether, while sending a clear signal that pipeline projects and oil sands mining developments that fit under Alberta’s 100-megatonne emissions cap would viewed as consistent with Canada’s plan for hitting its climate-change targets. - Globe and Mail

Natural gas producers and analysts are trying to solve a perplexing mystery: who signed a 100-year contract to ship gas on TransCanada Corp.’s pipeline system? The question has persisted since February when TransCanada informed its customers of the outcome of an open-season bidding process to ship 260 million cubic feet of gas per day on its Nova Gas Transmission System to the critical east-bound export point called the “East Gate” at Empress, Alta., to feed the energy-hungry markets of Ontario and Quebec. Calgary-based TransCanada has been working to expand access to the East Gate following outcry from natural gas shippers in Alberta, many of whom blamed the pipeline giant for the volatility in the Alberta gas benchmark prices through the second half of 2017 that, at times, led to negative prices. TransCanada said the average term the company awarded for space following one of its recent open season bidding processes was 107 years. - Calgary Herald

President Trump has yet to save the struggling coal industry, numbers show — Michael Collins

President Trump was in a celebratory mood early last spring as he prepared to sign an executive order rolling back environmental protections reviled by the nation’s coal industry. Turning to the miners beside him at the ceremony, Trump repeated a promise that he made often during his campaign for president. “You’re going back to work,” he said to nods of approval and applause. But not much has changed for the nation’s ailing coal industry since Trump moved into the White House. Coal employment and production are up just slightly, coal consumption is down and coal prices have fallen a little below where they were the day that Trump took office. The data may not show it, but coal leaders are adamant that Trump already has had a positive impact on their industry. For the first time in years, they say, miners are daring to feel optimistic about coal’s prospects. - USA Today

A supply chain cyberattack has disrupted a customer transaction service for a network of U.S. natural gas companies, according to multiple news reports. It affected a software platform, developed by a company named Energy Services Group LLC, that is used to process customer transactions, according to Bloomberg News. Such data-exchange software is widely used in the gas industry, though the attack was limited to the Energy Services platform. The attack has not been attributed to any group, but the energy sector has been in the crosshairs of sophisticated hackers for years. The Department of Homeland Security warned last month that Russian government actors have been targeting U.S. energy infrastructure since March 2016 with a multi-stage hacking campaign. - Cyber Scoop

Shell has ramped up its efforts to capture a bigger share of the east coast industrial gas market, inviting buyers to bid for supplies out to 2025 just as LNG import projects proposed by rivals in New South Wales and Victoria also hunt for customers. The move underlines the energy giant's near-term ambitions to leverage off its growing trading presence in gas and power on the east coast, targeting commercial and industrial customers which have become a lower priority for some gas retailers that are focusing on higher margin sales to households. - Australian Financial Review