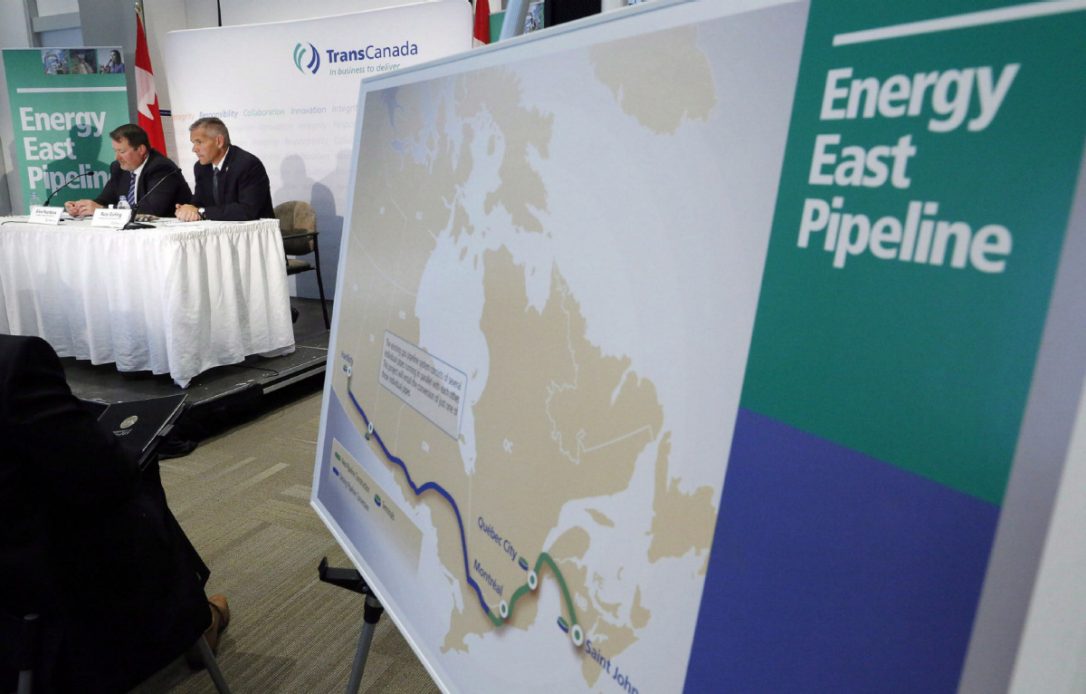 In a decision cheered by environmentalists but considered a setback by the oil industry, Canada’s national energy regulator says it will allow wider discussion of greenhouse gas emission issues in upcoming hearings for the Energy East Pipeline. The National Energy Board said Wednesday it will for the first time consider the public interest impact of upstream and downstream GHG emissions from potential increased production and consumption of oil resulting from the project. - Chronicle Herald

In a decision cheered by environmentalists but considered a setback by the oil industry, Canada’s national energy regulator says it will allow wider discussion of greenhouse gas emission issues in upcoming hearings for the Energy East Pipeline. The National Energy Board said Wednesday it will for the first time consider the public interest impact of upstream and downstream GHG emissions from potential increased production and consumption of oil resulting from the project. It says it will also, for the first time, allow discussion at hearings of the effect of meeting government GHG emission targets on the financial viability and need for the 4,500-kilometre pipeline. Previously, the NEB only considered GHG emissions directly associated with construction and operation of a pipeline. - Toronto Star

Malaysia’s Petroliam Nasional Berhad is considering investing in a pipeline to market its Canadian gas assets after scrapping plans for a liquefied natural gas (LNG) project in Canada, state news agency Bernama said on Wednesday. Petronas, as the company is known, would use the pipeline to connect and market natural gas resources from an area of western Canada which has 22.3-trillion cubic feet of proven unconventional gas to the rest of Canada and North America, Bernama said, citing an interview with the company’s upstream Chief Executive Mohd Anuar Taib. Petronas scrapped its proposed US$29-billion LNG export terminal in western Canada last month due to weak global prices, in a blow to its ambitions to expand its LNG portfolio beyond Malaysia.- Financial Post

The British Columbia government has applied for intervener status in court challenges against the Trans Mountain pipeline expansion. The NDP government announced earlier this month that it would be joining the legal fight against Ottawa’s approval of the $7.4-billion project and hired former judge Thomas Berger to provide legal advice. Several First Nations and municipalities have filed legal challenges against the project, which would triple the capacity of the Alberta-to-B.C. pipeline and increase the number of tankers in Vancouver-area waters. Attorney General David Eby says the majority of the pipeline is in B.C. and the government should be able to represent the interests of people in the province, notably because the Alberta government has already been granted intervener status. - Toronto Star

An innovative research project is underway at the University of Guelph that seeks to turn food waste into energy. Engineering professor Animesh Dutta and his team received $177,127 this month through the Canada Foundation for Innovation to explore how agri-food waste can be transformed into bio-carbon, as a potential replacement for coal, and petroleum. Dutta says it’s a resource looking for an opportunity. This process he says can produce bio-products that have many applications, particularly in the automotive industry. - Global News

The Energy Department said Wednesday the government should make it easier and cheaper to operate power plants, including coal and nuclear plants, to strengthen the nation’s electric grid. The department said in a new report that the closure of many plants that once formed the backbone of the grid has raised the risk that consumers might not have reliable electricity. In a letter accompanying the report, Energy Secretary Rick Perry said the U.S. is fortunate to have many sources of energy and should use them all. In a key recommendation, the report urges the federal government to make licensing and permitting faster and cheaper for facilities “such as nuclear, hydro, coal, advanced generation technologies, and transmission.” Environmentalists and advocates for renewable energy have been bracing for the report since drafts that leaked to the press in recent weeks. They say the Energy Department will use the study to argue that fossil-fuel plants are needed to make the grid reliable, and that policies promoting renewables should be cut back. - National Post

Grid study: Natural gas the leading cause for decline of coal, not renewables: John Siciliano

A much-anticipated Energy Department study of the electric grid released Wednesday night points to abundant natural gas from fracking as the leading cause for the decline in coal and nuclear power plants and calls on federal agencies to make changes that would stave off the loss of more coal-fired and nuclear power plants. It does not blame solar and wind energy for the drop in those power plants as critics had anticipated. Nor does it completely blame Environmental Protection Agency rules for the decline. The "top driver is the low cost of natural gas," said an Energy Department official briefing reporters Wednesday afternoon. - Washington Examiner

Australian household budgets are about to take another hit as energy 'bill shock' looms: David Scutt

Australian household finances, already stretched by years of weak wage growth and high levels of indebtedness, are about to take another hit courtesy of a recent sharp increase in electricity prices at the start of July. “Bill shock”, as it has become known, is about to arrive in your letter or inbox, creating additional headwinds for household spending and, as a consequence, the outlook for economic growth. In response to higher electricity and gas prices, households have reduced the amount of energy that they use. However, prices have risen at a far quicker pace over the same period, seeing the share of household spending directed to energy costs lift to around 2.5%. While 2.5% doesn’t sound like much, Kristina Clifton, economist at the Commonwealth Bank, suggests this increase, coming at a time when household budgets are already stretched, could see Australians cut back their discretionary spending even further. “Rising electricity prices are another headwind for households to face,” she says. - Business Insider

Australia's peak industry lobby group fears Victoria's decision to go it alone and pursue a 40% renewable energy target within eight years will push up prices that are already hurting business. The Andrews government tabled legislation on Wednesday that set a statewide renewable energy target of 25% by 2020 and 40% by 2025. The Matthew Guy-led state Coalition has already pledged to abolish the Victorian renewable energy target if it takes government next year. The head of the Victorian Chamber of Commerce and Industry, Mark Stone, also said its members were hurting due to skyrocketing energy bills.  "We've got low-hanging fruit that will enable the 25% target to be achieved, with wind and solar but … to get to 40% within another five years is going to require significant investment," Mr Piper said. "That might mean that we are looking at higher priced electricity." - Sydney Morning Herald