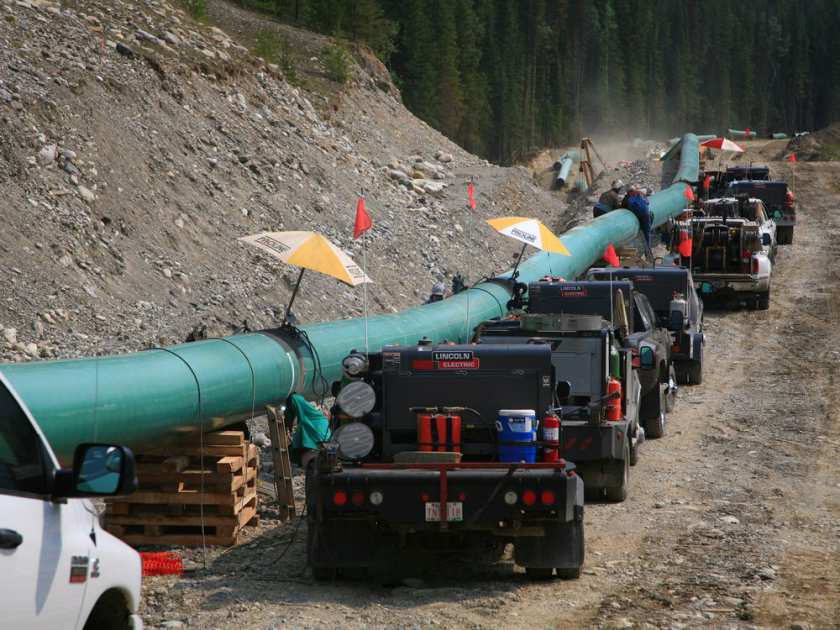 The Federal Court of Appeal is allowing British Columbia to be an intervener in a legal fight against the Trans Mountain pipeline expansion, but with some conditions. Several First Nations and municipalities filed legal challenges against Ottawa’s approval of the $7.4-billion project that would triple the capacity of the Alberta-to-B.C. pipeline and increase tanker traffic from the Vancouver area to the south portion of Vancouver Island. B.C.’s new NDP government, which has been opposed to the project, applied to be an intervener on Aug. 22, missing the initial deadline of April 13 that fell before the May provincial election. Justice David Stratas said in the ruling that while B.C.’s involvement in the case comes late, the hearings set for Oct. 2 to 13 will go ahead as scheduled. - Toronto Star

A hydroelectric venture in central Labrador should serve as a cautionary tale for British Columbia and its own ambitions to build a multibillion-dollar dam in the province's northeast, the former head of Newfoundland and Labrador's public utilities regulator says. David Vardy, a former economics professor and retired civil servant in that province, published a letter Tuesday addressed to the B.C. Utilities Commission containing more than a dozen recommendations based on lessons learned from Muskrat Falls. The utilities regulator was tasked earlier this month by B.C.'s new NDP government to review the economic viability of Site C, an $8.8-billion energy project under construction on the Peace River. "B.C. has the luxury of being able to stop this now without going any further," Vardy said in an interview. "In terms of the take-away from Muskrat Falls: It's not too late to stop it." - CTV News

Alberta’s rural communities fearing devastating effects of coal plant shutdowns are looking to renewable energy to aid their struggling economies, but there are concerns wind and solar power will not generate long-term jobs. The town of Hanna expects a major blow to its local workforce when a coal mine shuts down and its coal-fired power plant converts to natural gas, which won’t require nearly as many jobs. - Calgary Herald

NB Power in the green, but far from debt target – report: Robert Williams

NB Power has $23-million in net earnings throught the first quarter of the 2017/18 year and its debt level is decreasing, but what does that mean in the overall picture? It means NB Power needs to kick into overdrive to meet approaching targets. The Crown utility continues to hack away at its debt level, attempting to meet the debt/equity ratio of 80/20 as set out by the Electricity Act. Its total debt stands at $4.866-billion, which is a cut of $14-million since last quarter. NB Power already announced a plan in 2011/12 to pay off $1-billion of its debt by 2025, attempting to open up space for larger capital projects like the life extension of the Mactaquac Generating Station west of Fredericton. - Telegraph Journal

A pledge to convert methane gas from the Chaleur landfill into electricity that will provide enough power for 135 homes is the latest bright spot for NB Power, which wants to see dozens of smaller energy projects take hold rather than building more colossal generators. To qualify, the small-scale facility must be located in the province and capable of being connected to NB Power’s distribution system. The electricity also must be generated from a renewable source such as solar, wind, hydro, tidal, biogas, biomass, or sanitary landfill gas. - Telegraph Journal

Nova Scotians can expect gas prices to increase in the wake of Hurricane Harvey, but likely not enough to trigger the Utility and Review Board's interrupter clause that would see a price adjustment ahead of the regularly scheduled change, says a gas price analyst. Dan McTeague, a senior petroleum analyst with gasbuddy.com, said the price of gas has already increased by about two to 2.5 cents per litre in unregulated markets in Canada. He said a further increase of two to three cents more is likely. In Nova Scotia, the Utility and Review Board has traditionally resorted to using it for increases of at least six cents. - CBC

GTA gas prices have risen about four cents a litre due to the impact of Harvey on U.S. refineries, senior petroleum analyst Dan McTeague says. And it’s not over yet. “We will see price increases, sort of slowly,” McTeague, of GasBuddy.com, said Tuesday morning. “Everyone’s expecting the other shoe to drop. It’s still a developing story.” The price of gasoline in the GTA is about $1.14 a litre, and it’s expected to increase to about $1.16 a litre on Wednesday. About a dozen refineries in the path of Hurricane Harvey have shuttered their operations for now, but McTeague said he’s keeping his eye on some large refineries just outside the current swath of flooding. - Toronto Sun

Tropical Storm Harvey is upending the flow of oil and petroleum all around the world—a consequence of the growing influence of the U.S. in the global energy industry. Since the last time a major storm passed through the Gulf Coast, vast quantities of oil and natural gas have been unlocked from shale formations in the U.S. While production from these fields accounts for just a fraction of the global oil market, that output now feeds a huge volume of gasoline, chemicals, plastics and crude exports, which means Harvey will have repercussions of global proportions. And the U.S. Gulf Coast has been at the center of this shift. The area has become an increasingly critical link in the global energy chain. Shipments from the region now satisfy 6% of global demand for oil and other liquid petroleum fuels—twice as much as in 2012, according to Barclays PLC. - Wall Street Journal

For years, much of the nation’s refinery capacity and chemical production have been concentrated along the swamps and narrow inlets of the Gulf of Mexico, risking devastation in a monster storm. The pounding being endured by coastal Texas will probably be the biggest test of that risk so far, and energy experts say it raises questions about the area’s role as a hub for such crucial and environmentally sensitive industries. “The hurricane did what terrorists could only dream of and take a third of U.S. refinery capacity off line for days on end,” said Michael E. Webber, deputy director of the Energy Institute at the University of Texas at Austin. - New York Times

Energy retailers have agreed to write to more than 2 million customers on the highest electricity tariff by Christmas to help them switch to a discounted contract as well as move to monthly bills, as part of an agreement with the Turnbull government on Wednesday. The bulk of the burden will fall on the big three—Origin Energy, AGL Energy and EnergyAustralia—which have hundreds of thousands of customers on expensive "standing" rates as they have never chosen a competitive offer. - Australian Financial Review

Malcolm Turnbull has signaled the government’s eventual response to the Finkel review will not create any barriers to building new coal-fired power stations, as he secured additional undertakings from energy retailers to be more transparent with customers. After a meeting with energy retailers in Sydney on Wednesday, the prime minister was asked whether a clean energy target would be set at a threshold allowing for a new coal plant. The prime minister said, “I don’t foresee there being any barrier to a new coal-fired power station being built.” Turnbull said the government had a technology agnostic approach to energy policy and his view was “all of the above.” It was the second meeting in a month with energy retailers, and extracted undertakings that retailers would write to customers to inform them of more cost-effective plans. - Guardian