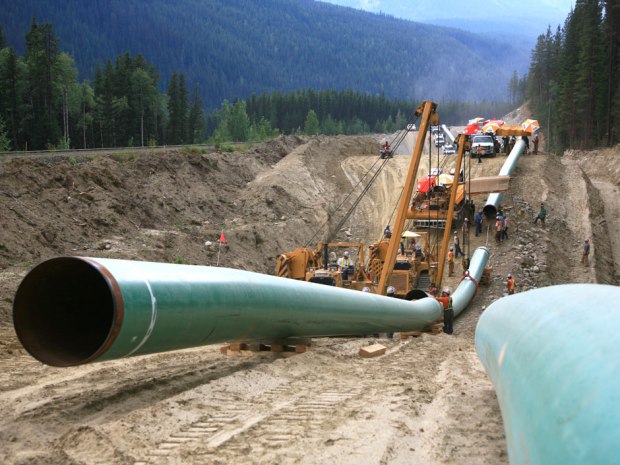 The National Energy Board is expected to announce Thursday details of hearings to narrow down the route of the Trans Mountain pipeline expansion, even as construction is set to start in September in segments where regulatory requirements have been met. Meanwhile, the NEB said in a letter late Tuesday to project proponent Kinder Morgan Canada that it has now met all but one condition—an environmental protection plan—to start construction at its Westridge Marine Terminal in Burnaby. That’s the first location where the company, which has proposed a phased or staggered approach, plans to start building the controversial $7.4-billion project. “Public safety and the protection of the environment is of paramount importance to the NEB, and will hold Trans Mountain accountable for its performance during the construction and operation of this project, including full compliance with all regulatory requirements and commitments,” the regulator said to the company. - National Post

The National Energy Board says the Trans Mountain pipeline project has met conditions required for the expansion of its Westridge Marine Terminal in Burnaby, B.C. Trans Mountain, a subsidiary of Kinder Morgan Canada, has plans to expand the terminal's dock to load three tankers, up from one, and increase the number of delivery lines connected to its other Burnaby terminal. The board says in a letter to Kinder Morgan published on its website Wednesday that there are 157 conditions imposed on the project overall and the pre-construction conditions specifically pertaining to the terminal have now been satisfied. - CBC

A Canadian aboriginal band seeking to stop Kinder Morgan Inc's Trans Mountain pipeline expansion has asked a court to consider the federal government's position for a tougher review on a rival project. The west coast Tsleil-Waututh Nation made the request in a letter to the Federal Court of Appeal seen by Reuters this week. The request came after Canada's resource regulator announced a tougher upcoming review for TransCanada Corp's Energy East pipeline last week, but the request cites the federal government's May recommendation for that review. The request was part of a legal challenge that, if successful, would quash the federal approval for the $7.4-billion Trans Mountain project and cause lengthy delays. - Globe & Mail

Hurricane Harvey is sending pump prices higher for U.S. motorists and causing temporary shifts in the flow of oil and gasoline around the world after taking down a huge chunk of U.S. refining capacity. It will be days or even weeks before the energy sector in the southeast Texas Gulf Coast is back to normal operations as it deals with flooding in the aftermath of Harvey, which has been downgraded to a tropical storm. The region from Corpus Christi, Texas, where Harvey made landfall, to the Louisiana state line accounts for about three per cent of the U.S. economy and is a crucial export market for oil and chemicals. Wednesday brought news that the nation’s biggest refinery, which was already running below half-speed, had begun a complete shutdown. - Toronto Star

After a phenomenal rush of new solar projects in recent months, the boom-bust scenario all too familiar for renewable energy investment looks at risk of a rerun. Dramatic progress on reducing capital costs in solar generation means the long-term outlook remains robust. But industry watchers are pointing to bumps on the road for the next 12 months, and possibly longer depending on the outcome of the wrangle in Canberra over a Clean Energy Target. Environmental markets analyst Tristan Edis points to the voluntary demand for renewable power from green power schemes and commitments by water companies to offset their carbon emissions as providing additional support. He sees a risk of the large-scale renewables investment boom "coming to a crashing halt" within the next 12 months once those state governments have wrapped up their targets, unless the government manages to put in place a viable follow-up policy such as a CET. - Australian Financial Review

In the state's south-west, major employers said they had spent millions of dollars to overcome energy prices which have doubled this year. Meat processor Australian Lamb Colac (ALC) employs up to 700 workers in a town of 12,000 people. Workers butcher cuts of lamb that are exported and eaten around the world and it all happens in giant cool rooms, powered by gas and electricity. "Both of them [electricity and gas] have doubled in price compared to what we saw last year," chief financial officer Dale Smith said. "We can't pass any of [the higher prices] on," Mr. Smith said. - ABC News