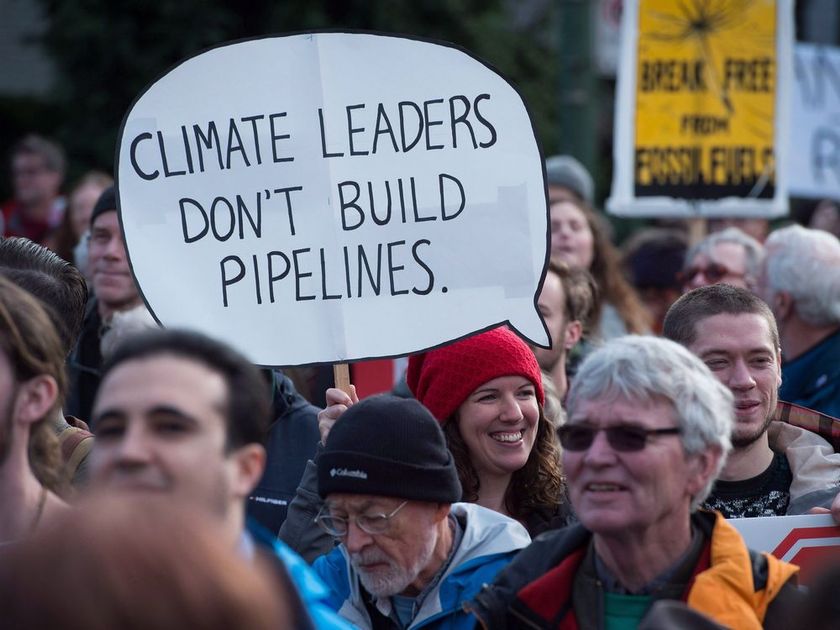 The proposed Trans Mountain pipeline expansion will need 1,200 permits to pass through British Columbia to the tidewater that Alberta says it needs to secure its economy, but only 66 of those permits have so far been approved and the process isn't likely to get easier. The figures, released by the B.C. environment ministry on Thursday, would seem to bolster the concerns of Ian Anderson, president of Kinder Morgan Canada Ltd., who told an energy forum held by the Greater Vancouver Board of Trade that the controversial $7.4-billion project is in danger of getting bogged down because of persistent permitting delays. At least one prominent B.C. First Nation leader has said permitting delays are exactly how he wants the project killed. "Anyone investing in Kinder Morgan should prepare for a long, drawn-out and very expensive battle," Grand Chief Stewart Phillip, president of the Union of British Columbia Indian Chiefs, said in a news release. - Globe & Mail

After speeches in Calgary, Toronto and Ottawa, Alberta Premier Rachel Notley's pro-pipeline trip arrived in Vancouver at a particularly fraught moment. Trans Mountain pipeline construction is on pause while Kinder Morgan Canada and the City of Burnaby are locked in dispute over when the city will issue the required permits. Kinder Morgan says Burnaby is stalling, Burnaby said it's acting in good faith. - CBC


Anti-pipeline B.C. turns its back on Canadian economy — Clive Cocking

This is now a serious question: do most British Columbians see themselves as Canadians? On current evidence, the answer must be no. This is demonstrated by the unyielding environmentalist opposition to any pipelines carrying Alberta oil or gas across B.C. to tidewater. The opponents’ only evident concern is in preserving “Beautiful British Columbia.” - Edmonton Journal

British Columbia says the federal government needs to back off and stop interfering in an independent review process over the approval of Kinder Morgan’s Trans Mountain pipeline. Environment Minister George Heyman said he is “very disturbed” that the federal government supports the creation of a standing panel to quickly settle conflicts over provincial and municipal permits. Kinder Morgan’s Trans Mountain proposal would triple the capacity of a pipeline between the Edmonton area and Metro Vancouver and boost tanker traffic through the Burrard Inlet about seven fold. - Vancouver Sun

Pembina Pipeline Corp. says its board of directors has approved construction of an export terminal at Prince Rupert, B.C., to be used to send liquefied Western Canadian propane to markets in Asia and Central America. The Calgary-based company says the project on Watson Island is expected to cost about $260-million, up from an estimate of $150-million made last spring, due to minor scope changes, dock maintenance and additional site preparation. - Vancouver Sun

New and simplified Hydro One bills, which highlight savings from the government’s 25% rate cut, are giving Premier Kathleen Wynne’s Liberals an unfair edge as an election looms, rivals say. “It’s not appropriate,” NDP Leader Andrea Horwath said Thursday. “The only reason that information is on the bills is to provide a political advantage for the Liberals.” Energy Minister Glenn Thibeault denied the accusation, saying it was Hydro One’s choice to put that information on the bills, which also highlight the money owed and when it is due. “It’s clarity,” Thibeault told reporters. “We get questions in my office all the time saying ‘I don’t see the fair hydro plan on my bill.’” The information about the rate cut is under the headline: “what do I need to know?” Progressive Conservative MPP Lisa MacLeod called the inclusion of the savings “a ploy” and “cynical” although her party would continue with the 25% off plan if elected next June 7 and add a further reduction of 12%. - Toronto Star

Ontario Progressive Conservative leader Patrick Brown’s election platform presents his “guarantee” that his party “will fix Hydro.” His plan’s core is to reverse the PCs’ longstanding rejection of Premier Kathleen Wynne’s “Fair Hydro Plan,” which shifts 25% of current household rates to taxpayers and future consumers. Wynne’s electricity-rate deferral and cost-shifting program had been roundly criticized by both the legislature’s auditor general and financial-accountability officer. The PCs had hammered the government with this analysis. Just weeks ago, the PC’s energy critic, Todd Smith, attacked the Fair Hydro Plan, saying “It is deceitful, it’s dishonest and it’s shady.” Now, the new PC position is that the only problem with Wynne’s program is that it does not go far enough. Brown’s Ontario PCs are promising they will “save” households 12% on their rates over and above Wynne’s existing 25% cut. All the big-ticket items Brown calls cost “savings” are merely more cost shifting — removing costs from the ratepayer’s left pocket by taking from the taxpayer’s right pocket. - National Post

Not long ago, the idea of 18-wheelers pulling cargo with a battery seemed somewhat ludicrous to me. But I’ve changed my mind. In fact, I would argue that electrically powered wheels may come to the trucking market faster than the world of passenger cars. The reason is simple. Trucking companies – like any capitalist, profit-maximizing institution – make rational purchase decisions based on careful assessments of economic viability. Any capable Chief Financial Officer is algorithmically brain-wired to ask, “Is this thing going to make our company any more money?” If the answer is “yes,” the switch is often fast. Individuals on the other hand are often motivated by soft sell factors like vanity, size and flexibility, not to mention instant convenience. A good set of cup holders often trumps fuel economy. The option to haul a sheet of plywood on a moment’s notice, if only twice a year, is perceived as worth the cost of supersizing a vehicle purchase. - Financial Post

National environmental groups waging legal battles against energy projects are delaying approval of U.S. natural gas pipelines, a top federal energy regulator said on Thursday. The groups have lawyers who "understand how to use all of the levers of federal and state law to frustrate pipeline development," Neil Chatterjee, the chairman of the Federal Energy Regulatory Commission (FERC), told a meeting of natural gas industry officials. Some recent approvals of natural gas pipelines, such as the Atlantic Coast Pipeline from West Virginia to North Carolina, have taken two years or more. Chatterjee said he hoped a timeline of two-plus years would not become the new industry norm. - Economic Times

Extracting copper from the Adelaide hills has been a tough business in recent years, so it's little wonder Steve McClare and the team at Hillgrove Resources have been searching for other ways to make money from a big hole in the ground. In hydro-electricity, Hillgrove may have found another productive use for its 47-year-old Kanmantoo mine, which is located about 50 kilometres south-east of Adelaide. The junior miner is rapidly advancing plans to establish a "pumped hydro" facility at Kanmantoo, joining a trend that has numerous Australian miners assessing their suitability to host such facilities amid surging power prices. - Australian Financial Review