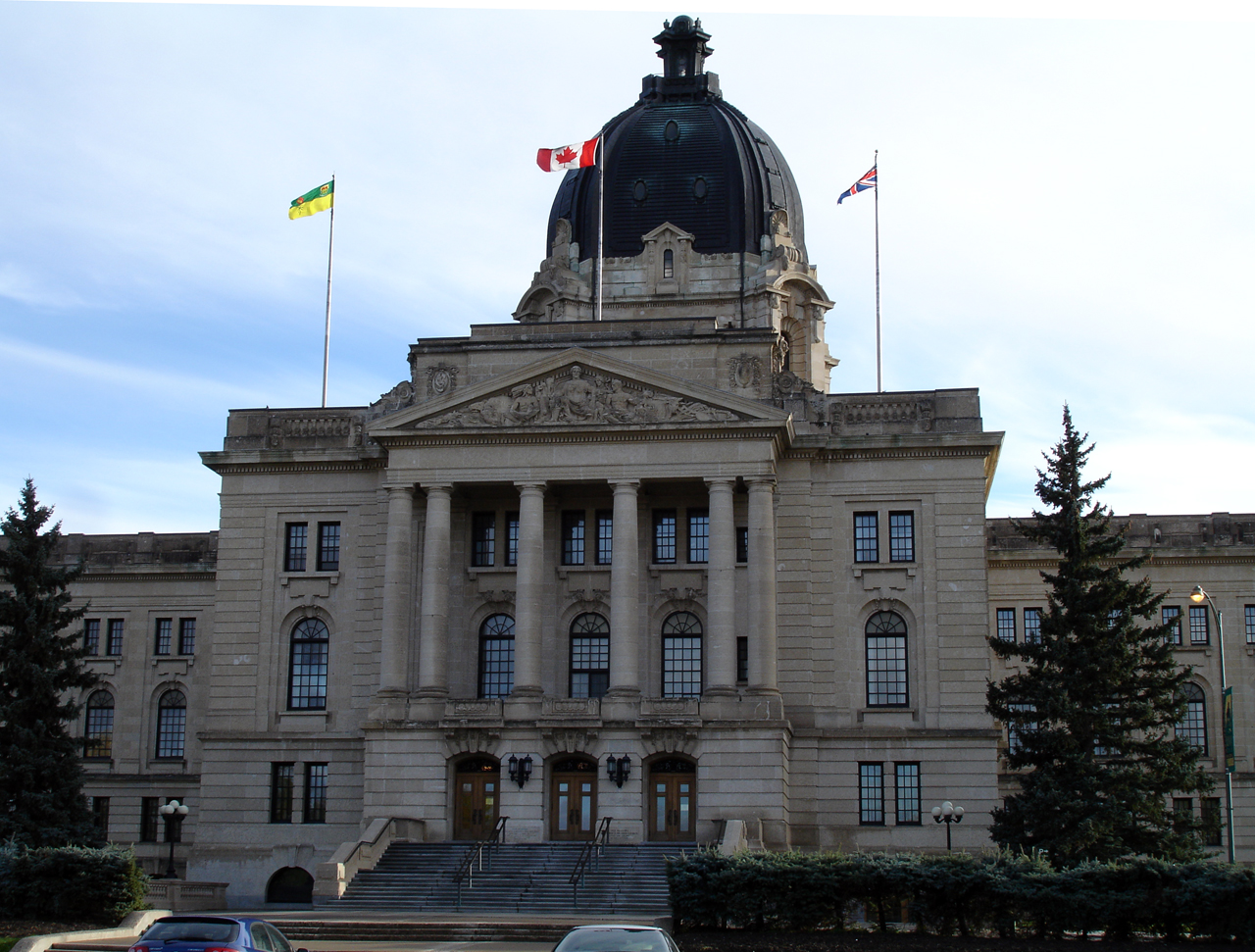 Saskatchewan has released a new climate-change strategy plan that’s main platform is the purchasing of carbon offsets, not the implementation of a carbon tax. The plan calls for performance standards on facilities that emit more than 25,000 tonnes annually of carbon dioxide equivalent. If facilities exceed the limit, they will have to pay, and will be able to buy carbon offsets from farmers or foresters. Critics argue that the plan does not have enough scope, with no mention of touching transportation, home heating, or commercial and industrial energy use. Environment Minister Catherine McKenna said the plan is a good step, but that it will need to be wider to satisfy Ottawa. - Chronicle Herald

The province unveiled its climate change strategy on Monday and to no one's surprise it does not include a carbon tax. For months, Premier Brad Wall and his Saskatchewan Party MLAs have been at odds with any federally implemented carbon tax. All the candidates running to replace Wall have also expressed their opposition, even suggesting they will use the courts to fight Ottawa. - CBC

TransMountain lawyer Maureen Killoran argued in the Calgary headquarters of the National Energy Board that city of Burnaby officials continue to put forth unnecessary delays to TransMountain’s permit approval for pipeline construction. Ms. Killoran argued that if these delays continue, they could be seen as outright refusal and unconstitutional. She argued that the mayor of Burnaby Derek Corrigan has created an atmosphere of opposition, even if the mayor has not specifically interfered in the process. The city of Burnaby continues to say the TransMountain did not follow the regulatory process for applying and receiving permits. - Chronicle Herald

Kinder Morgan says that it’s main focus for the TransMountain pipeline expansion still has to be in obtaining permits, with spending going mainly to attaining them. The company has said it can’t commit to major construction spending until it has more clarity on key permits, approvals and judicial review, and that the project is potentially already delayed nine months due mostly to challenges with the regulatory process. The company says that it expects to lose about $75-million in earnings before certain deductions for every month the in-service date is pushed back.  - Chronicle Herald

The controversial deal for the Churchill Falls hydro station in Labrador between the provinces of Quebec and Newfoundland and Labrador signed in 1969 is under review at the Supreme Court of Canada. So far, the deal has generated more than $27.5-billion for Hydro-Quebec, and $2-billion for Newfoundland and Labrador. Lawyer Doug Mitchell will argue the contract for Churchill Falls hydro station should be renegotiated due to changes in the energy markets that could not have been foreseen at the time it was signed. Hydro-Quebec is arguing that the contract cannot be reopened due to changing circumstances until 2041. Right now the contact gives Hydro-Quebec almost all buying power over the energy from the plant at a fixed price which decreases over time. Quebec can then sell the power for a much higher cost. A win for Newfoundland could mean billions of dollars of deficit and debt payments. - Chronicle Herald


Is Rachel Notley trying to sell pipeline jobs to a province that doesn't need them? — Graham Thomson

Alberta Premier Rachel Notley has had so many audiences jumping to their feet to applaud her pro-pipeline speeches these days you have to wonder why they bother to put chairs in the rooms. Her latest ovation came from the Greater Vancouver Board of Trade on Thursday after her by-now familiar address pushing for construction of Kinder Morgan’s Trans Mountain pipeline expansion. Construction has been delayed by nine months thanks to opposition in British Columbia. Notley and her government are getting a bit frantic, for reasons both economic and political. - Edmonton Journal

With Nebraska’s approval of the Keystone XL pipeline, Canadians need to wake up and see that we are not relying on our own extensive resources, but almost solely on the low-price American market for oil and gas. The lack of encouragement our energy industry receives from the government is in part due to Canadian indifference. Part of this indifference is due to the relentless opposition of fossil fuels, assisted by the media. Despite the fact that most Canadians object to tax increases and rising energy costs, there are few who would speak up for increasing energy investment. If we do not build pipelines in Canada, our assets will be stranded, and we may not be able to retrieve them. For no environmental gain, Canada could end up with the world’s largest reserves, after they become worthless. - Toronto Sun

Steelhead LNG is no longer exploring a proposal for a liquefied natural gas terminal on south Vancouver Island. The company announced plans in August 2015 to build a floating facility moored to shore with capacity to process up to six million tonnes of LNG per year. The proposal was in partnership with the Malahat Nation, which owns the Bamberton industrial site about 40 kilometres north of Victoria. 200 jobs, 30 years of revenue were estimated from proposed export facility outside Victoria. - CBC

A year after it committed $1-billion to build three steam-assisted heavy oil extraction plants in western Saskatchewan, one of Canada’s largest energy companies says its board has approved two more of the facilities at a combined cost of $700-million. Husky Energy Inc.’s decision to green light the plants — to be built at Westhazel, near Mervin, and Edam — is part of its broader strategy to approve two plants per year “for the foreseeable future,” according to a spokesman. - Saskatoon Star Phoenix

Clean-energy developers are learning the hard way that every line of the U.S. tax code is connected. While the bill passed by Senate Republicans over the weekend would preserve crucial credits for wind and solar farms, it also imposes a minimum tax on foreign transactions for JPMorgan Chase & Co., Bank of America Corp. and other large investors that threatens to erode the value of those credits. The issue hinges on an arcane but critical source of clean-energy financing that’s expected to reach $12-billion this year. The funding, known as tax-equity, comes from renewable-energy developers selling their tax credits to banks, insurance companies and others that apply them to their own bills from Washington. If those big lenders wind up with a minimum tax on foreign transactions, they may have less need for clean-energy credits.  - Bloomberg

U.S. District Judge James Boasberg has ordered that additional measures be put in place to grant the request of Standing Rock and Cheyenne River Sioux tribes that the Missouri River in North Dakota be protected. The Army Corps of Engineers and the developer of the Dakota Access pipeline must now complete an oil spill response plan and incorporate additional pipeline monitoring. Cheyenne River attorney Nicole Ducheneaux said the ruling acknowledges that the government and energy companies can’t be allowed to make decisions “without including stakeholders and the tribes to whom the United States owes a trust duty.” Texas-based developer Energy Transfer Partners maintains the pipeline is safe, and the company and the Corps had argued that tribal requests for additional protections at Lake Oahe were unnecessary or unwarranted. - The National Post

South Hedland is home to what has been dubbed “the most efficient” power plant in Western Australia. Commissioned in August, the South Hedland Power Station officially opened last week, delivering 150MW of energy to the Pilbara region for residents and industry. Horizon Power managing director Frank Tudor said the new plant included the latest technology and had not cost taxpayers any extra. “Using combined cycle natural gas, the power station is delivering a safe and reliable energy supply to more than 15,000 Pilbara residents while generating fewer greenhouse gas emissions,” he said. “This new station ensures customers are buying power from the most cost-effective system possible.” - The West Australian

According to Quartz, a Chinese company has invented an emissions-free bulk cargo ship powered by 1,000 lithium batteries and launched it in Guangzhou. The ship can apparently travel 80 kilometres on a two-hour charge, according to the state-run People’s Daily newspaper. The 70.5 metres long vessel will ply the Pearl River in southern China – transporting up to 2,100 metric tons of coal to a power plant. - The National Post

Israeli energy Minister Yuval Steinitz has said that a potential 6.2-billion-euro pipeline bringing natural gas from deposits in the eastern Mediterranean to Europe is becoming a very realistic possibility, and could help secure the continent’s energy future. On Tuesday, an agreement between Cyprus, Israel, Greece and Italy was signed to examine the possibility of building the pipeline. - The National Post