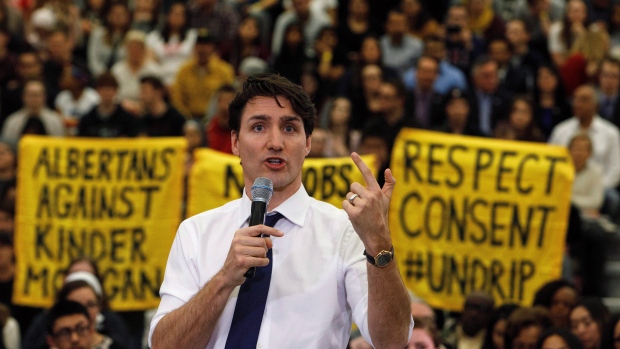 ‘That pipeline is going to get built,’ says Trudeau — John Hall & Ria Renouf

There's no punch to Trudeau's pipeline pledge. He needs to put the gloves on — Claudia Cattaneo

If Prime Minister Justin Trudeau was serious about supporting the Trans Mountain pipeline expansion, he’d act with the urgency Canada’s pipeline crisis deserves, not parrot promises no one believes he will keep. During a stop in Edmonton Thursday, amid rising tensions between Alberta and British Columbia over the long-delayed project, Trudeau said the $7.4-billion expansion would get built and that the federal government would stand by its decision to approve it. “It’s important to get our oil resources to markets other than the United States for the Alberta economy, for the Canadian economy to continue to grow and we need to do that safely,” the Prime Minister said on an Edmonton radio station. Here’s the problem: That promise has no credibility because there have been zero consequences for undermining it. The province’s most provocative move came this week when it announced a plan to restrict transportation of bitumen until there are further studies on its behaviour in a spill, effectively giving itself power over the expansion. Here’s the other problem: There is no deadline to keep that promise, and the project could run out of money before Trudeau delivers. - National Post

The battle over the flow of oil to the West Coast has ratcheted up with Prime Minister Justin Trudeau declaring that the Trans Mountain pipeline expansion will be built, and Alberta Premier Rachel Notley suspending electricity-purchase talks with British Columbia – a move she says could cost that province almost half-a-billion dollars a year. Ms. Notley told reporters that she had a phone conversation with Mr. Trudeau Thursday in which she demanded he take "greater and clearer leadership on this." She noted that the ending of electricity talks with B.C. is only her government's first salvo in hitting back against what she said was her western neighbour's illegal push to try to stem any increases in Alberta heavy oil shipped through B.C. lands and ports to global markets. "We are prepared to do what it takes to get this pipeline built – whatever it takes," she said. - Globe & Mail

Bob Cochlan has been in the energy industry since 1968 and has seen many booms, busts and battles. Like many in the oilpatch, he is deeply frustrated with the current gridlock surrounding getting pipelines built and Canada’s inability to get the best price for its resources. “I am just fed up with the inertia of this country and the indifference of this country,” said the veteran Calgary natural gas liquids consultant. “Someone needs to raise the temperature of the water here, because we’re going down.” Across the Canadian energy industry, the mercury is indeed rising in an escalating conflict between two western neighbours. The cold war between Alberta and British Columbia over the issue of the Trans Mountain pipeline expansion has shifted into a white-hot mode in the past week. After B.C. proposed regulations to restrict the amount of diluted bitumen heading to the Pacific coast, Alberta announced Thursday it will suspend talks with its neighbour over expanding electricity infrastructure that would help B.C. Hydro send more power into this province. - Edmonton Journal

The latest pipeline faceoff between Alberta and British Columbia is more than a constitutional tussle – it is also a reminder of the unresolved contradictions within Prime Minister Justin Trudeau’s climate-change policy. Moreover, it is a reminder that the core of that policy – the assertion that carbon emissions can be adequately reduced without significant economic cost – is simply not true. Trudeau’s bargain was that pipelines could be built, but only if their builders had social license to do so. That social license would include a commitment to reduce carbon emissions in order to fight climate change. The bargain didn’t work. In part, this was because opposition to Kinder Morgan was based on more than climate change. But in part it was because the premise behind the bargain was false. - Toronto Star

The pipeline war no politician will win — Gary Mason

Politics, nothing more, has incited the latest furor around the Trans Mountain pipeline. The fallout from the actions taken by the B.C. government this week could reverberate in this country for years to come. The implications for Prime Minister Justin Trudeau, Alberta Premier Rachel Notley and B.C. Premier John Horgan can't possibly be overstated. Mr. Trudeau promised to deliver this pipeline to the good people of Alberta. His government has constitutional authority over construction of the project, power that is being directly challenged by the B.C. government. And then there's rookie Premier John Horgan. Say one thing about the man, he promised on the campaign trail to use "every tool in the toolbox" to stop the project, and he's doing just that. What's not immediately apparent is whether the new oil-spill regulations his government is proposing is purely theatre, a one-act play designed to ingratiate his government to its legislative partners, the Green Party. Finally, there is Ms. Notley. The consequences for her in all this are the most obvious, and perilous. If this pipeline doesn't get built, her government is toast. - Globe & Mail

Liberal leader Dougald Lamont makes a good point about the need for the provincial government to stop using Manitoba Hydro as a “bank machine.” For years, the province — under both NDP and Progressive Conservative governments — have siphoned hundreds of millions of dollars out of Hydro. They don’t advertise it, especially when they increase the amount they’re taking. But they do it every year. One of the ways the province takes money from Hydro is by charging something called a “water power rental” fee. They charge Hydro for using the water that flows through its turbines to generate electricity. Hydro doesn’t consume the water. The Crown corporation simply uses the water flow to produce clean, renewable power. It’s absurd the province would charge a Crown corporation, which is owned by Manitobans, a fee to use its own water flows to generate electricity. But the province does, every year, like clockwork. In 2016-17, the Pallister government took $122-million from Hydro in water power rentals, up from $117-million the year before under the NDP government. - Winnipeg Sun

Love him or hate him, Trump is eating Canada’s lunch on energy — John Williamson

In opposition to other U.S. Presidents who wanted energy independence, President Trump wants his country to export energy, use its natural resources to fuel domestic economic growth and advance U.S. foreign policy by providing energy security to its allies, thereby weakening Russia and hostile OPEC nations. This policy adjustment is so practical it will eventually be perceived as common sense. Trump has approved pipelines, lifted energy moratoriums and abandoned the Paris climate agreement. With all of this, the country’s carbon emissions continue to decline. Canada has lost its once-touted tax advantage over its southern neighbour. Prime Minister Justin Trudeau is also motoring ahead on his own energy policy, but his government’s objective seems to be to shackle Canada’s hydrocarbon industry – he has implemented a carbon tax, added red tape and cancelled pipelines. Canadian oil cannot make it to market due to the lack of transportation options. On energy, Trudeau is going in the opposite direction of the U.S. and the world’s other energy-rich nations. - Telegraph Journal

The United States’ transformation from an imports-dependent energy consumer to an oil and gas powerhouse in around half a decade is nothing short of breathtaking. And it’s just getting started. The implications of this transformation go far beyond global oil markets and are reshaping the global economic order. The three-year oil price downturn starting in 2014 was induced by U.S. shale and has already rocked many nations in the Organization of the Petroleum Exporting Countries that have to scramble to find new sources of revenues and appease their citizens. Growing liquefied natural gas exports from the U.S. to Europe can, over time, start diminishing Russia’s dominance in European energy markets. America’s oil renaissance also has huge implications for Canadian oil producers and the wider economy, which has manifested itself in many direct and indirect ways. Canadian producers have already seen investment dollars move out of the oilpatch and into the U.S. - National Post

Energy retailers will be asked to inform customers before they increase power prices under a plan proposed by federal Energy Minister Josh Frydenberg and the New South Wales government. It comes as one of the country's major electricity and gas retailers has made a radical suggestion that large electricity users should be given the choice whether they want to pay up for round-the-clock firm electricity supply, or pay a lower price and accept their supply may need to be cut off when demand is high. While the Turnbull government last year moved to make energy retailers more transparent with their different pricing plans, the new proposal submitted to the Australian Energy Market Commission on Friday is aimed at keeping households even more informed about price hikes. - Australian Financial Review