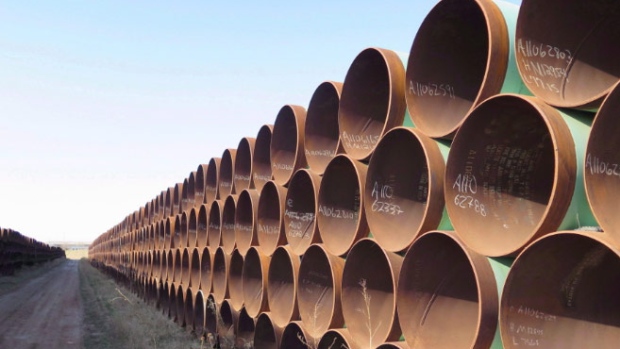 The Trudeau government is poised to introduce legislation this week to overhaul the way the federal government does environmental assessments on major energy projects like pipelines. Instead of three separate bodies reviewing a designated project like a pipeline, the government is expected to create a single agency to assess the environmental and economic impacts of a project along with social and health impacts. The Trudeau government has tasked themselves with overhauls of the environmental and energy review systems and have already revised the National Energy Board. Currently there are three separate agencies responsible for environmental assessments – all with their own sets of rules – the National Energy Board, the Canadian Nuclear Safety Commission, and the Canadian Environmental Assessment Agency. The federal government is looking to combine these three into one. - CBC News

Prime Minister Justin Trudeau sought to bridge the divide between Alberta and British Columbia on Friday with a vow that climate change and spill protection programs won’t go ahead unless the Kinder Morgan pipeline expansion is built. He said the pipeline expansion and the two key environmental programs sought by B.C. are a package deal. “The issue we have is, if we don’t move forward in getting our resources over to markets overseas in safe and secure ways, the rest of the plan no longer holds,” Trudeau said. “We won’t get the Oceans Protection Plan investments. We won’t get a national price on carbon and we would never meet our Paris targets.” - CBC News

‘The gloves are off’ on pipeline, says Notley, while Trudeau feels B.C. heat — Clare Clancy

During his town hall tours along the west coast last week, Prime Minister Justin Trudeau defended his support of the Trans Mountain pipeline expansion, assuring the heckling audience that the expansion will be built. This comes after British Columbia moved to set up restrictions on bitumen shipment increases from Alberta to conduct more spill response studies. Alberta Premier Rachel Notley has continuously criticized this move, calling it unconstitutional. She announced on Thursday that talks to purchase electricity from B.C. have been suspended. Notley called on the Prime Minister to be more definitive in his actions and words. Speaking at a town hall in B.C., Mr. Trudeau said, “You can no longer make a choice between good for the environment and good for the economy, you have to do them both together.” - Telegraph Journal

B.C. Premier John Horgan said Friday his government’s announcement last week to restrict bitumen shipment for the purposes of spill research comes from an effort to protect the province, not to be provocative. At a press conference Friday, Horgan said this decision “should not be the foundation of a trade war between good friends.” Alberta Premier Rachel Notley described the B.C. regulations as an unconstitutional effort to stop the Trans Mountain pipeline expansion and has retaliated by suspending talks on buying B.C. electricity. B.C. is challenging the expansion in federal court, arguing the province was not adequately consulted. - Financial Post

Alberta Premier Rachel Notley’s promise to suspend electricity talks with British Columbia over a pipeline dispute may not carry much weight, according to energy experts. Energy consultant David Gray at Gray Energy Economics Inc. said the threat is minor, as the amount of power in question is not very great. There have been informal talks for some time to use the full 1,200-megawatt capacity of the existing power lines running between the two provinces, rather than the 800 megawatts currently allowed. For B.C. to lose up to $500-million a year on the sale of that extra power, as Notley suggested Thursday, would mean some very high assumptions, as that would assume that the space was used to the fullest amount every single hour of the year, at a very high price. The loss of the potential energy imports is seen as fairly neutral to Alberta’s large-scale power consumers, since they had not been expecting any, said Vittoria Bellissimo, executive director of the Industrial Power Consumers Association of Alberta. - Vancouver Sun

No one who’s watched Alberta Premier Rachel Notley in action would ever call her a quitter or even a Debbie Downer. No matter the issue nor how turbulent the political winds, Notley can be counted on to be feisty at the very least. And whether one likes her policies or not, she is usually a combination of cheery, charming and proficient. But Thursday, when Notley summoned reporters to an impromptu news conference at the Alberta legislature, she sounded, well, defeated. - Toronto Sun

Enbridge Gas New Brunswick raised its price for natural gas on Thursday, raising the price from $2.35 per gig joule to $11.20. The prices have been elevated all over northeastern North America because of a brutal cold snap. This price increase will affect around 6,900 homeowners and approximately 1,600 commercial and institutional customers. Enbridge acknowledged that the prices for gas may remain high past February as the company recoups amounts it lost selling below cost in December and January. - CBC News

Jim Turner is the chief operating officer of Controlled Thermal Resources, an energy company from Australia. On a hill overlooking the Salton Sea, he points out a patch of land that will someday house his company's first power plant, named Hell's Kitchen. "We're standing on top of what is probably the most robust geothermal resource in the United States," he explains. Geothermal energy uses the earth's natural heat to create electricity. While there are several different ways to accomplish this, the most common is to take super-heated water from geothermal hot spots and pipe it to the surface. It then turns into steam and spins a turbine, which generates electricity. - NPR

From the quest of “energy independence” to “energy dominance,” the U.S. has travelled a significant distance. Last Tuesday in his State of the Union address President Donald Trump hinted at the possibility of U.S. energy dominance, underlining that the “war” on American energy is over. Times have indeed changed. With domestic output crossing the 10 million barrels per day mark last November – highest in last seven decades – the U.S. is now lining up among the top three global energy producers along with Saudi Arabia and Russia. The jump in U.S. crude output also carries significant geo-political consequences. - Hellenic Shipping News

Electricity smart meters have been recommended for all households and businesses, a move that would raise the cost of power during peak periods in a bid to lower demand, as data shows Victoria and South Australia are unable to produce enough energy on extremely hot days with little or no wind. A bipartisan federal parliamentary committee report released yesterday says the introduction of smart meters and dynamic billing is critical to managing the electricity grid as demand grows and different types of generation come online. As federal and state governments clash over the National Energy Guarantee and renewable energy policy, the House of Representative committee recommended the Australian Energy Market Operator consider a rollout of smart meters to all electricity users. - The Australian