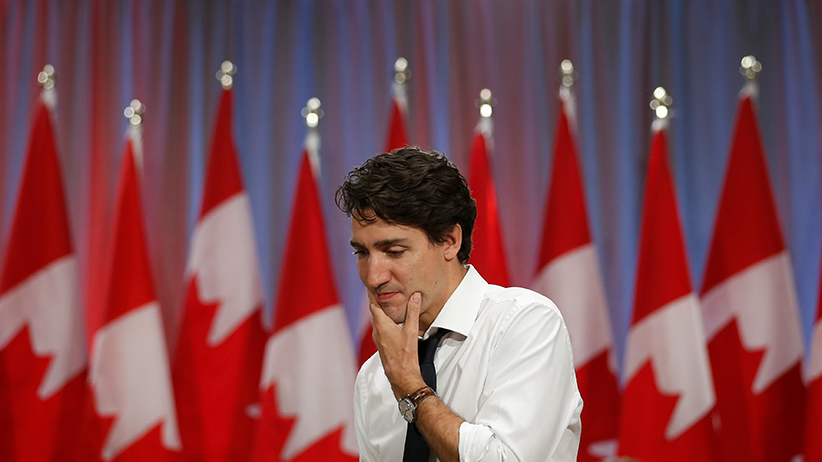 Not only does the Prime Minister’s carbon pricing plan drive its foes further away, but it also threatens his friendships, as in the case of New Brunswick’s Premier Brian Gallant. The draft of the plan released Monday is essentially a threat to the provinces: impose your own carbon tax, or we’ll impose this one. New Brunswick announced that revenues from their existing gas tax would be devoted to climate change, thereby transforming it into a carbon tax. Too bad that clashes with the criteria Ottawa has set for a carbon price. Nova Scotia also has a plan where carbon is not taxed highly enough to gain federal approval. Ironically, Mr. Trudeau’s enforced plan might be the greatest help to potential Ontario Premier Patrick Brown, who could use the federal implementation as an excuse for his bringing in of a carbon tax. - Globe and Mail

The New Brunswick government is sticking to its story that its climate plan complies with federal requirements – even as Ottawa drops hints that failure to do so could cost the province a lot of money. Environment Minister Serge Rousselle was reacting to new details of the federal "backstop," the carbon pricing that the Trudeau government will impose on provinces that don't go along with its plan. Those details, released Monday, include a suggestion that in recalcitrant provinces, Ottawa could return carbon-price revenue directly to individuals rather than to provincial governments. But Rousselle brushed off that scenario Tuesday, saying that despite two apparent violations of the federal plan, the Trudeau Liberals will eventually accept the Gallant Liberals' policy. - CBC News

After the federal government released a first draft plan for implementation of their federal carbon tax, Premier Brad Wall and the five candidates vying to replace him all stated they would continue to oppose the carbon tax. Premier Wall restated his view that a federally-imposed carbon tax is a “significant overreach” and could be open to a Constitutional challenge. All five candidates released statements saying that if elected, they would refuse to implement such a system, and take the federal government to court if necessary. - Saskatoon Star Phoenix

Jason Kenney could kill the provincial carbon tax as Premier, but Albertans would still have to live with the proposed federal price on carbon pollution, says a constitutional law expert. The only way for a province to stop Ottawa from imposing a price on carbon would be to successfully argue that the federal legislation was unconstitutional, Eric Adams said in an interview Monday. Alberta's carbon tax came into effect in January 2017 and increased by 50 per cent this month. The federal government plans to bring in its own price on carbon pollution later this year. Kenney, leader of the Opposition United Conservative Party, is committed to repealing the carbon tax if he becomes Alberta premier in 2019, regardless of what conditions the federal government imposes. Adams said it's likely the federal government will be able to use its constitutional jurisdiction to bring in an effective carbon tax regulation. "Making a threat of a lawsuit sounds good and aggressive. The reality is that those cases are destined to fail," he said. - CBC New

Prime Minister Justin Trudeau's government is giving big industrial polluters special treatment and weakening its carbon-pricing plan, Green Party Leader Elizabeth May says. She told Huffington Post that she is “horrified” following the release of the federal government’s proposed carbon-pricing regimen. Under this new scheme, the federal government says, big polluters won't be charged according to the fuels they purchase but will pay a carbon tax if their emissions are above a certain industry-average, intensity-based target. In a press release, the Liberal government said its plan would limit the impact of the carbon tax on the "international competitiveness" of industrial polluters and minimize the risk that these businesses would leave Canada for countries that don't have a carbon price. This is not enough for Ms. May, who said “we have a very, very rapidly closing window on making it through the climate crisis with an intact human civilization, which is to say functioning nation-states…and avoiding the death of millions.” - Huffington Post

Steep discounts in prices for western Canadian heavy oil (made worse by volume constraints on the Keystone pipeline system following a leak in South Dakota in November), are moderating and should gradually ease through 2018 to allow Canadian producers to reap bigger rewards from strengthening world oil prices, according to GMP FirstEnergy. Because of the transportation blockage, growing volumes of Alberta’s oilsands couldn’t get to market. Analyst Martin King is predicting that a lot more rail transport will be used until more pipelines come into action so that Alberta can get its oil to market. Rail transport is more expensive than pipeline but the shipper has the advantage of sending his crude to the market where it will fetch the best price. - Financial Post

'Shooting themselves in the foot': How NAFTA’s collapse could disrupt U.S. – Canada energy trade — Claudia Cattaneo

The oil trade agreements established through NAFTA are too good to give up. The U.S. would be worse off should NAFTA be abolished as it would lose the preferential access to Canadian oil it has enjoyed, as well as a certainty when these goods come to market. “They would no longer have any automatic right to a proportional share of the resource in Canada,” said Derek Burney, former Canadian ambassador to the U.S. and a key player in both NAFTA and the Canada-U.S. Free Trade Agreement. But Canada would also lose its dependence on the U.S. market for its oil and gas exports. Article 605 of the Agreement says Canadian energy exports to the U.S. as a percentage of total output cannot fall. In particular, it prohibits the Canadian government from imposing restrictions that causes U.S. imports of Canadian energy to fall, as it did in the 1980s under the National Energy Program. Thanks to NAFTA, which promoted investment and market negotiation, the three countries are on track to achieve energy self-sufficiency as early as 2020.  - Financial Post

Halfway through his mandate, Prime Minister Justin Trudeau is confident that his government’s progressive way of dealing with issues like climate change, income disparity, globalization angst, and populism, will be enough to carry Canadians to a brighter future. He claims his government has given tangible benefits to working people, while taxing the wealthy and making them remember the people who work for them. Speaking about climate change in particular, the Prime Minister said, “the greatest threat facing Canada [concerning climate change] is continued behaviour as usual.” He claimed it is imperative for Canada to reduce pollution and develop new sources of clean energy. - Chronicle Herald

The Nova Scotia Energy department is offering $150,000 to five projects that will research the effectiveness and environmental impact of tidal energy turbines in Nova Scotia. The province could become a world leader in tidal energy, but there is a great amount of hesitation as so little is known about the process of collecting tidal energy. Tidal turbines in the Minas Passage have undergone testing in recent years, and did not survive. But a major priority is improving environmental monitoring. A huge factor in this is preservation of aquaculture and ecosystems, with fishermen’s associations challenging the construction of tide turbines. - Chronicle Herald

The Offshore Alliance, a coalition of 25 fishing groups and environmental organizations, say they are concerned that the federal government is considering passing off some of the environmental assessment process responsibilities to the Canada-Nova Scotia Offshore Petroleum Board and the Canada-Newfoundland and Labrador Offshore Petroleum agencies they say are lobbies for the oil and gas industry. The Alliance says that organizations like the Petroleum Board, which is responsible for regulation of petroleum activities in the province, are unfit for any assessment responsibilities as they have a mandate to promote and expand oil and gas activity. - Chronicle Herald

Commodities analyst Martin King told a crowd at the Calgary Petroleum Club on Tuesday that prices in the natural gas field will most likely be very volatile this summer due to weak supply in Alberta, weak demand, and pipeline constraints to move gas to market. Natural gas companies have been feeling the heat for some time, and now are slashing their spending plans for 2018 and looking to drill fewer wells. The industry’s struggles come at a time when companies are unlocking more and more natural gas, and production in Alberta is climbing. But demand in Canada is stagnant, and Canadian producers have very few options for transporting gas. - CBC News

Why oil is about to hit troubled waters — Spencer Jakab

Brent crude briefly topped US$70 a barrel last week, its highest since November 2014, and the obvious question was when would the shale drillers turn on the taps. The better question this time around is what will happen to demand and volatility in the oil market. The supply argument is the easy one and both big drivers point to an increase in crude. This dynamic has dominated oil markets since the “sheikhs vs shale” showdown began around four years ago, sending oil into a sharp year-and-a-half long swoon. - The Wall Street Journal