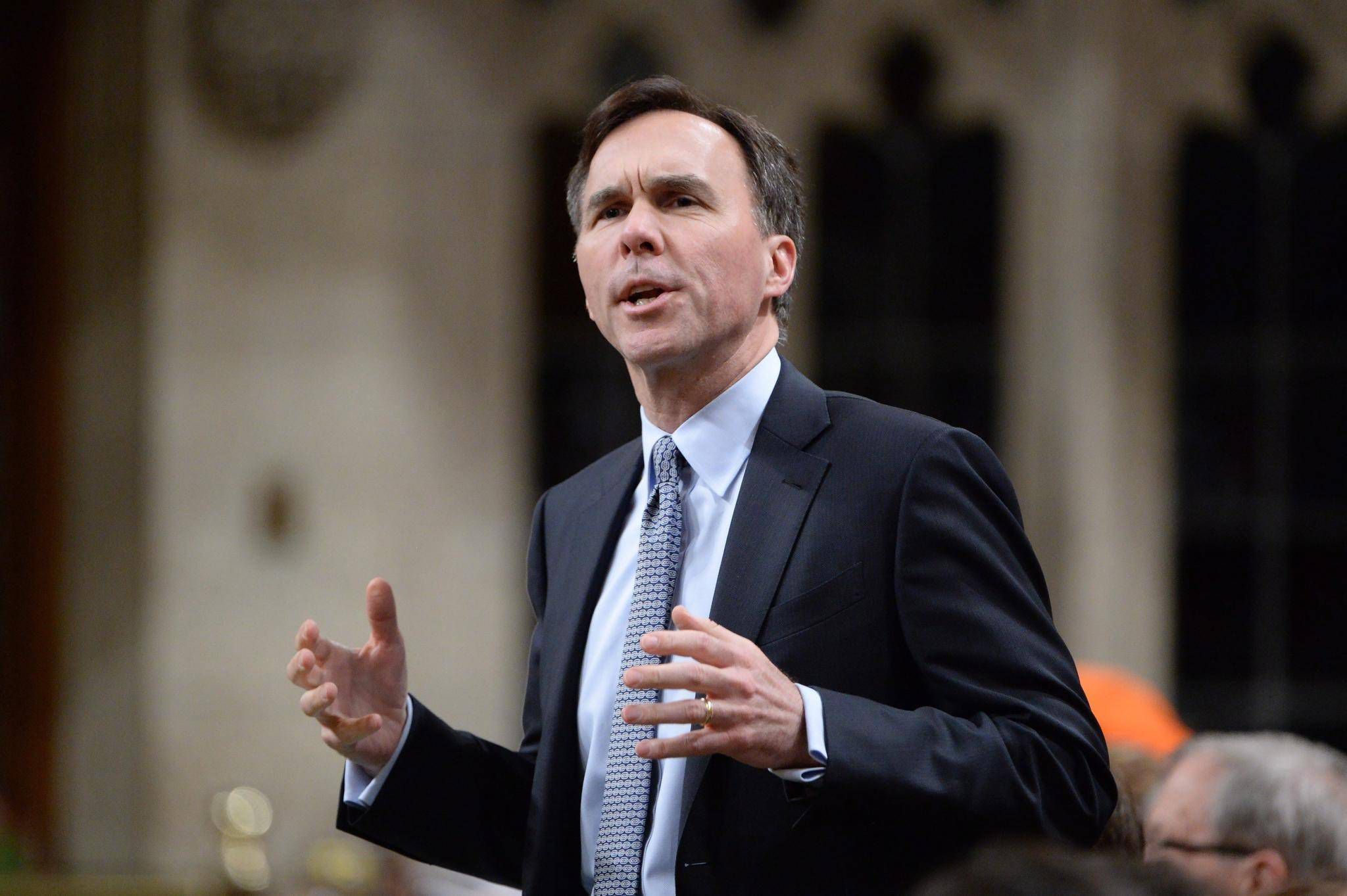 The federal Liberals have already laid out their plans to ensure the national carbon price hits $50 a tonne by 2022, but government documents indicate Ottawa is eyeing hikes beyond that time horizon. Federal Environment Minister Catherine McKenna says no decisions have been made about a carbon price post-2022. However, a federal Finance Department document distributed to Alberta reporters on Wednesday by the province's United Conservative Party (UCP) discusses the nuts and bolts of the federal carbon-pricing "backstop" or benchmark. The document notes the overall approach will be reviewed in 2022, "to confirm the path forward, including continued increases in stringency in future years." The document, originally obtained by subscription-only news website Blacklock's Reporter, suggests that Prime Minister Justin Trudeau's government is eyeing carbon-price increases beyond 2022, and above the $50-a-tonne price, the UCP said. Many economists, environmentalists and even energy-industry watchers have already assumed this was the plan, but a post-2022 price road map has not been clearly laid out by Ottawa. - Globe & Mail

The Alberta government is making a two-decade commitment to TransCanada Corp's long-stalled Keystone XL pipeline – a key move that will underpin the US$8-billion project that has struggled to gain enough support from major oil shippers. The Alberta government's Crown corporation, the Alberta Petroleum Marketing Commission, will pledge 50,000 barrels of oil per day for 20 years, said Cheryl Oates, communications director for Alberta Premier Rachel Notley. While rival Enbridge Inc. calls the deal a "subsidy" for the TransCanada project, the Alberta government said the commitment will bolster industry confidence and stability for the pipeline project, as well as the province's economy as a whole. Last march, Keystone XL was given the green light by U.S. President Donald Trump. If built, the 830,000-barrel per day pipeline will provide a more direct route for shipping mainly heavy Canadian oil to key U.S. markets. - Globe & Mail

TransCanada Corp. has enough shipper interest to go forward with the Keystone XL crude oil pipeline. The Calgary-based company secured “approximately 500,000 barrels per day of firm, 20-year commitments,” according to a statement on Thursday. The pipeline operator said it will continue to secure additional long-term contracts for the pipe. TransCanada received state approval in Nebraska in November to construct the project using an alternate route. It is working with landowners along the new path to obtain the necessary easements, the company said. - Calgary Herald

At the most recent Group of 20 meeting, the conflict between the United States and the other participants over support for the Paris climate accord garnered most of the attention, while an unexpected transformation was overlooked: The energy economy is changing faster than world leaders recognize. Our dependence on coal, petroleum and natural gas as energy sources is so extensive that it is hard to imagine it ending. Nonetheless, evidence is growing that the transition to a postcarbon energy economy is gaining momentum. While governments focus policy efforts on regulating and enticing producers and consumers off their reliance on carbon-based energy, few seem prepared for a world in which the supply of alternative energy sources and the demand for them are driving this change at a faster pace than regulatory frameworks can. - Globe & Mail

Kinder Morgan Canada’s Trans Mountain pipeline expansion project has fallen even more behind schedule, with the $7.4-billion project now estimated to be in service by December 2020. The company decided to hold back from major spending in 2018 and focus on getting the final approvals and permits needed to begin construction, although it is unlikely they will get all the permits before construction begins. The National Energy Board has not yet made a decision on establishing a process to deal with potential future permitting delays for the project, as the company requested. - Chronicle Herald

Fracking protesters met outside the Westin Nova Scotian in Halifax on Wednesday to protest a meeting of the Maritimes Energy Association happening inside. They claimed that fracking causes risks to ground and drinking water, as well as farmland. Geoff MacLellan, the province’s energy minister, recently suggested lifting the fracking moratorium that currently exists in the province due to new information on the provinces shale gas resources. - Chronicle Herald

While oil prices continue their claw back this month, there is concern in the industry that as the market rebounds, some producers in the U.S. will turn on the taps and flood the market with oil and once again stymie the recovery. The North American benchmark for crude oil opened at over $60 US per barrel at the start of the year and has continued to hover comfortably above that mark through January. - CBC News

A little-known, TSX-Venture listed company plans to tear down a refinery that has sat idle for 17 years and rebuild it as a re-refinery, making it the first used oil refinery in Alberta. Gen III Oil Corp. announced Wednesday that it had inked a 20-year lease with Calgary-based Parkland Fuel Corp. for land in Bowden where Parkland owns an inactive oil refinery along the highway between Calgary and Edmonton. - Calgary Herald

The President of New Brunswick-based company ClairiTech Serge Colin said his trips to China have helped him make connections for possible future sales. Colin said polluted air should mean sales for his air purification systems, which filter out the pollutants to provide fresh air inside living and working spaces. The company has been in operation for 25 years, and sells air purification systems all over North America. - Telegraph Journal

For about 120 seniors in Sundre, Alta., the West Country Centre is more than a place for a game of Canasta over lunch on Tuesdays or an exercise class on Wednesday mornings. “For a majority of our members, it is the one way to get out of the house,” said president Ed Wicks. But the future of the centre is at risk. An increase in utility costs which Wicks attributes to the carbon tax is leaving the centre short roughly $1,000 per year. While the group is currently using its financial reserves to make up the shortfall, Wicks said the centre needs to find a long-term solution. “We have to either come up with new ways to counter that extra expense or raise membership fees — [where] we would lose members — or possibly even shut down,” Wicks said. “If we can’t come up with another alternative and if the carbon tax happens to get worse, I would say we only have enough reserve to last another 12 to 24 months, and then we would have to shut our doors.”  - Global News

Beyond objections from the anti-carbon pricing side, what does the evidence say about the relationship between economic performance and carbon pricing? In 2017, Canada led the G7 in economic growth. In 2017, Quebec, Ontario, Alberta, and B.C. (all provinces with their own carbon pricing systems) were the four best performing provinces in real GDP growth. Putting a price on carbon is the most efficient way to reduce pollution, and so far, there has been no evidence in Canada that carbon pricing is detrimental to the economy.  - The Hill Times

While there are ‘not a lot of tree huggers in the marines’ – as was recently pointed out – bold and aggressive moves to cut down the US Navy’s vast energy footprint are beginning to show dividends. So is the Navy on track to clean up its act? According to its Fiscal Year 2016 Operational Energy Annual Report, the Department of Defense (DoD) used almost 86 million barrels of fuel over the period to power ships, aircraft, combat vehicles and contingency bases alone. Add to that the DoD’s installation energy requirement – primarily in the form of electricity and natural gas – to run some 300,000 buildings worldwide and the benefits of becoming institutionally leaner and greener are clear. However, it is not just the cost and price volatility of energy on the world market that forms the driver for the Pentagon’s growing love affair with energy efficiency and alternative fuels; there is the security aspect too. - Naval Technology News

With many of the nation’s nuclear plants nearing the end of a 60-year operational life cycle, the percentage of U.S. energy generated by nuclear power faces the potential for a significant drop. The International Atomic Energy Agency (IAEA), however, has floated another 20-year license renewal for consideration. Currently, nuclear power provides a full fifth of the nation’s electricity supply and more than 60% of its generation free of CO2 emissions. Given that electricity demand is expected to rise by more than 30% over the next two decades, according to the IAEA, if around 90% of U.S. plants are allowed to expire with their already once-renewed licenses, there could be a major disruption in the electric grid. Another renewal would, however, extend these plants’ operation time from 60 to 80 years. Proponents say it is more economical than building an entirely new plant and avoids the supply shortages that could result in the interim. - Daily Energy Insider

South Australian electricity consumers have scored a win after the Federal Court sided with the national energy regulator against a tariff appeal by grid owner SA Power Networks. The decision in the Full Federal Court on Thursday limits the revenues SA Power Networks can collect from customers over the period to 2020 to A$3.8-billion, some A$700-million less than the company had requested. Consumers' bills should be lower as a result, said South Australian Energy Minister Tom Koutsantonis, who described the decision as "a huge win for South Australian households and businesses". - Australian Financial Review