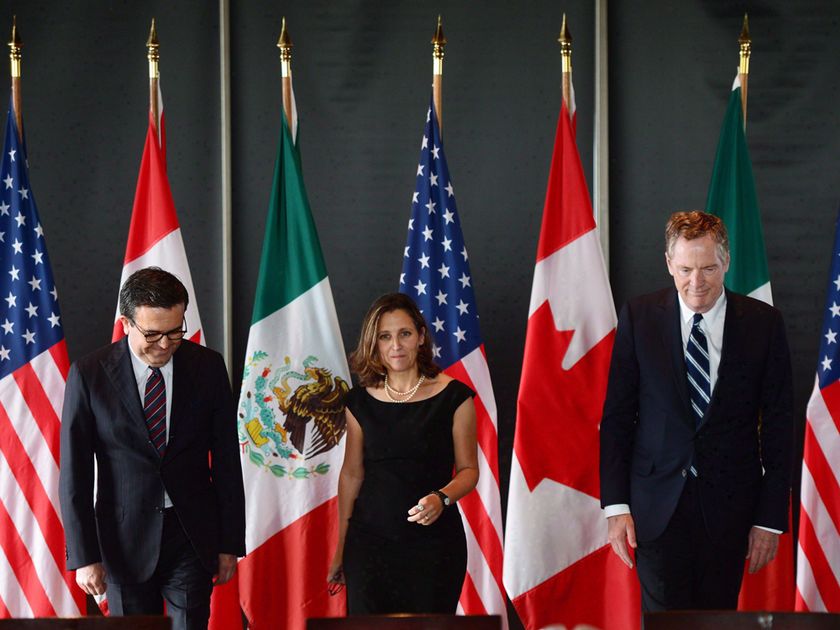 Can energy be the catalyst to a new NAFTA? As the NAFTA negotiations take place in Montreal, energy remains one of the most interesting opportunities for progress. In fact, it could be the rallying point, which makes a renewed NAFTA worth it for all three countries. The stage is set for progress towards shared energy goals for Canada, U.S. and Mexico: energy security, pipeline access and cheaper power. Importantly, for all three countries, North America has become the only region that is headed towards energy independence globally. We’ve all heard U.S. President Donald Trump clearly indicate his desire for U.S. energy dominance. The truth is, he can’t achieve his goal without Canada and Mexico. - Calgary Herald

TransCanada Corp. walked away from the mammoth Energy East pipeline project due to its ‘complexity and difficulty.’ But the pipeline giant will keep moving ahead with its Keystone XL project due to the strong economics underpinning the project. Company CEO Russ Girling didn’t drop any bombshells Thursday speaking at a CIBC investor conference in Whistler, but gave some clarity to two of the most critical pipeline decisions facing the country’s energy sector in recent years. - Calgary Herald

The head of TransCanada Corp. said Thursday that he's still optimistic on Canada's liquefied natural gas (LNG) export prospects and that the company is proceeding very carefully on their controversial Keystone XL pipeline. Speaking at an investment conference in Whistler, CEO Russ Girling said the company sees an emerging window of demand opportunity in 2022 for the Shell-backed LNG Canada project to go forward and expects to hear a decision in the next 12 months or so. On the company's Keystone XL project, Girling said TransCanada has looked carefully at how the alternative route for the pipeline was approved in Nebraska and is now confident the decision will hold. - CTV News

TransCanada Corp. will need to add as much as $200-million to the cost of its US$8-billion Keystone XL pipeline project after regulators in Nebraska approved an alternative to the company’s preferred route through the state, according to the company’s chief executive officer. - National Post

The University of Guelph has deferred a decision on if the school will pull its investment in fossil fuel companies, after nearly a hundred students stood in protest at a board of governors meeting Tuesday night. Fossil Free Guelph, a group of students that has been campaigning for the university to axe its investment in companies like ExxonMobil, Suncor and Syncrude, marched into the board meeting with signs and banners, to show their opposition to the school's current financial portfolio. Claiming that these companies pollute the environment, cause climate change and hurt Indigenous communities, the group asked the board of governors to commit to fully divesting money from the list of 50 fossil fuel companies in which the school currently has investments. - CBC News

As the Trump administration enters its second year, it makes sense to take stock of progress made on the president’s ambitious agenda. Most people are familiar with the big ticket items, including approval of the Keystone XL and Dakota Access Pipelines, clearing the way for oil and gas leasing in the Arctic and outer continental shelf, and steps taken to repeal and rewrite the Environmental Protection Agency’s onerous and unlawful “Clean Power Plan.” Whatever their ultimate outcome, the number and comprehensive scope of these important pro-energy actions send an unmistakable and powerful signal: American energy policy is and will remain foundational to the Trump administration’s strategy to spur economic growth, jobs and investment. - The Hill

The Trump administration will curtail a detailed review of how cordoning off 230,000 acres of U.S. Forest Service land in Minnesota from mining development will affect a neighboring wilderness area, according to documents obtained by The Washington Post.  - Washington Post

Wind, solar investment on a roll ahead of 2020 target — Angela MacDonald Smith

Further evidence has emerged of the flood of investment flowing into wind and solar power, defying earlier doubts about the level of penetration of renewable energy on the national grid. As of the end of December, there were 4,417 megawatts of renewables projects under construction around the country, up by almost 500 MW from a month earlier, according to data released on Thursday by Green Energy Markets, an adviser on clean energy. Wind farms under construction will produce twice as much power every year as the existing Snowy Hydro scheme, and when combined with wind farms already in operation, wind will supply five times power electricity each year, the firm said. "The level of investment commitments to new utility-scale renewable energy capacity in 2017 has dwarfed prior years, blasting away doubts about what Australia could achieve," it said. - Australian Financial Review