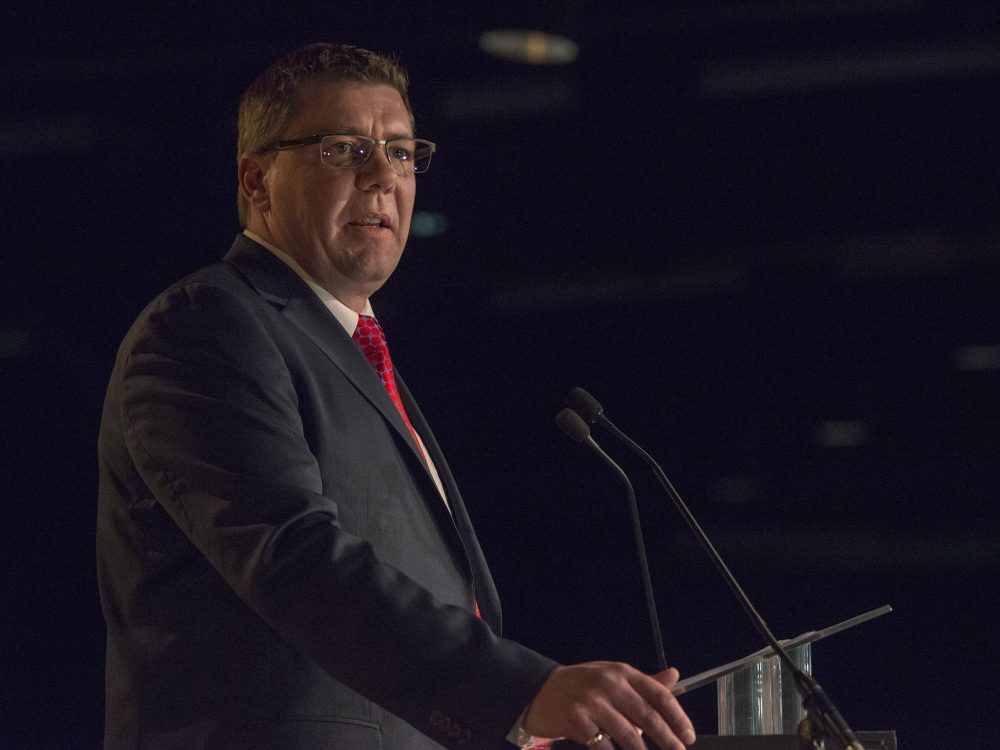 Saskatchewan’s next Premier Scott Moe says that he will not implement a carbon dioxide emissions tax, but his government needs to work closely with the federal government, particularly on matters of infrastructure and trade issues. Speaking with reporters after his victory speech Saturday night, Moe took a conciliatory tone saying Saskatchewan had already indicated its prepared to take any imposition of a carbon tax to court if necessary, but that he also has his own climate change plan he wants Ottawa to recognize. Moe also said he hoped his election as premier would bring renewal and continued unity to the Saskatchewan Party. - National Post

Bob McLeod, Metis Premier of the Northwest Territories, joined a chorus of other indigenous leaders this week arguing that the federal government is reaching too far into their implementation of environmental protection in the north, and it is undermining residents’ ability to make a living. “Full reconciliation can’t just be about political and legal authority, it also has to be about economic power,” McLeod said in a speech to the Vancouver Board of Trade. McLeod was outraged by Prime Minister Justin Trudeau’s imposition without consultation of a ban on drilling in the Arctic in late 2016. This, as well as Trudeau’s ban on oil tankers in Canada’s northern West Coast made it more difficult for LNG and oil pipeline construction to go ahead. McLeod said the ban has been a big blow for his region’s economy and the future prospects of Northern Indigenous communities. Regions in the north are sitting on vast amounts of resources, and must leave them in the ground. Jobs are not created, and energy is becoming unaffordable. - Financial Post

The CEO of Hut 8 Mining Corp. recently set up his company in Drumheller, Alberta, because its cheap electricity rates give him the biggest margins for his Bitcoin mining business. The cryptocurrency boom is pushing Canadian companies to join the global rush to find the cheapest sources of energy as computing competition drives power demands higher, resulting in crypto hotspots cropping up in communities like Drumheller, Winnipeg, and Montreal. Electricity is the highest cost for Bitcoin miners, and cheap energy is crucial as Bitcoin miners around the world are competing to solve the equations that feed into the blockchain that supports the currency. The more computing power miners throw at the system, the better their chances of being rewarded with bitcoin. - National Post

Two consultants, ValuTech Solutions and Synapse Energy Economics, both from the United States, have been hired to review NB Power’s new $1.5-billion plan to roll out and support smart meters that would help customers save energy. So far, both consultants have given the plan a thumbs down. “As currently proposed, the [metering] project could commit NB Power and its customers to a heavy cost burden without fully defining and quantifying the future benefits,” wrote ValuTech president Edmund Finamore. However, Michel Losier, the executive director of energy efficiency and customer engagement, described smart meters as critical to the utility’s future. Neither consultant said that smart meters were a bad idea – they instead stated that NB Power should go back to the drawing board. - Telegraph Journal

Several wind farms that were pitched to be built across New Brunswick as part of a now failed $2-billion bid to supply clean energy to New England could still go ahead, according to project proponents. Nova Scotia-based energy giant Emera and New Brunswick’s energy minister maintain there’s still a market out there for the entire project to be built. This comes after Emera’s other project Atlantic Link, lost out in a competitive bidding process to supply green power to the U.S. northeast. But the wind farm element of the project is still a possibility and Emera is optimistic despite losing out on the Atlantic Link to Hydro-Quebec. - Telegraph Journal

Despite the rising prices of oil, Canada is at a risk of missing out on the full rebound as investment shifts south of the border and the price discount grows for Alberta oil and natural gas. While the sector will see the reward of higher commodity prices, other risks are lining up for the industry, including lack of investment and the reluctance of petroleum producers to expand capital programs in Canada, compared with the spending increases seen in the United States. Conventional oil and gas spending is expected to rise about 6%, but oilsands spending will drop 14%, the fourth consecutive year of shrinking capital budgets in that critical area. Canadian companies are turning to development in the U.S. as well, as they can get higher prices for oil and gas produced there than in Canada. The inability to build new oil and gas pipelines in Canada has led to the price differentials widening in recent months as production rises. - Calgary Herald

While the U.S. invests in energy, Canada backs away. Guess who will benefit — John Williamson

As the United States president enters his second year in office, he has scored a number of policy wins that will boost the U.S. economy, create well-paid jobs and advance his administration's ambition of American energy dominance. Canada should take notice. When Canada and the U.S. have had broadly aligned energy policy, which is the historical norm, the outcome has led to aligned prices for consumers and our two economies. So, what's happening in Canada? Prime Minister Justin Trudeau is also motoring ahead on his own energy policy, but his government's objective seems to be to shackle Canada's hydrocarbon energy industry. - CBC

The arctic air that has frozen the northeastern U.S. over the first weeks of 2018 has prompted New Englanders to crank up the heat and New England’s utility companies to scramble for fuel. This season’s above-average heating and electricity demand has tested grid reliability at a time when the topic has had particular political salience. Most reporting on the matter has lauded the resilience the grid has shown, but a fuel-security analysis performed by the group that oversees New England’s power system delivers a pessimistic chill. New England’s analysis reveals that in winters to come fuel insecurity will plague the region. - The Hill

The inconvenient truth about EVs in cold weather — David Booth

So, a Tesla drove across the United States. That such a feat is no longer big news is testament to how far EVs have come and an indication electric vehicles are no longer limited to urban use. What is newsworthy, however, is that Alex Roy, The Drive’s editor-at-large drove from Los Angeles to New York City, in 50 hours – the quickest any car has ever traveled from U.S. coast to U.S. coast using electricity as its sole source of power. But does it mean that EVs are ripe to supplant gasoline-fueled cars in the immediate future? You see, buried deep in Roy’s 4,345-word treatise on his adventure is the following little tidbit: “It’s too bad we kept the heat off for most of the drive.” That’s right, no heat in a US$55,000+ car that purports to play in the luxury segment. - Driving

More than 10,000 homes in Australia’s second most populous state were stuck without power on Monday as a surge in demand amid scorching heat overloaded the grid, in the latest blow to the nation’s stretched power sector. The outages on distribution networks, which hit more than 50,000 homes on Sunday, came less than a year after Australia’s biggest city, Sydney, was hit by blackouts during a heatwave, and 16 months after a state-wide outage in South Australia. The latest blackouts, however, were caused by grid failures, rather than supply shortages, which had sparked a national debate over the nation’s rush to adopt renewable energy at the expense of coal-fired generation. Temperatures topped 40 degrees C (104°F) over the weekend in the state of Victoria, driving up power demand as homes cranked up their air conditioners and pool pumps and even forcing the Australian Open to close the stadium roof for the men’s championship match on Sunday night. - Reuters

The United States and Poland on Saturday took a strong stand against a planned gas pipeline linking Russia to Germany, saying it is part of a Kremlin scheme to politicize energy and undermine attempts to make Europe less dependent on Moscow. U.S. Secretary of State Rex Tillerson and Polish Foreign Minister Jacek Czaputowicz, after meeting in Warsaw, denounced the pipeline, which would bypass Poland and leave Central Europe vulnerable to Russian pressure. Tillerson said the U.S. saw the pipeline as “undermining Europe’s overall energy security and stability and providing Russia yet another tool to politicize energy as a political tool.” Poland began importing natural gas from the U.S. last year, and the U.S. has continued to try to wean eastern Europe off its energy dependence on Russia. - National Post