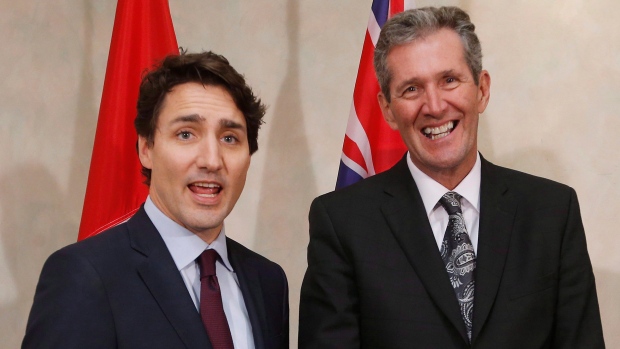 Sustainable Development Minister Rochelle Squires introduced legislation Thursday to create a carbon tax for Manitoba – but there remains no indication yet how the province will spend the revenue. The Climate and Green Plan Implementation Act will allow the province to begin charging $25 per tonne of carbon dioxide-equivalent greenhouse gas emissions. This would raise $143-million in new revenue during the next fiscal year, eventually rising to $248-million a year. The province intends to use part of the money to create a $102-million conservation trust that would protect natural areas, and also spend $40-million on a "green fund" intended to mitigate climate change. The legislation introduced Thursday will create the carbon tax, set the price at $25 a tonne and require the province to set five-year greenhouse gas emissions reduction targets. It will also require the province to set greenhouse gas pollution limits for large industrial emitters as part of a scheme similar to a cap and trade system. - CBC News

Manitoba has revealed more details about their made-in-Manitoba carbon tax plan. The province had already announced it would impose a $25-per-tonne carbon tax as of September 1. It will drive up the cost of gasoline, diesel, propane and natural gas. The government revealed Thursday that operations emitting 50,000 tonnes or more will pay the tax – or receive a credit – for every tonne above or below benchmarks that are to be set. Credits could be sold to other emitters. Companies that emit between 10,000 and 50,000 tonnes will have the option of using that system so they can receive credits. - Times Colonist

Until now, most pundits have taken the federal Liberals’ word that the carbon tax is going to happen, whether provinces sign on to it or not. No one’s really questioned the legitimacy of Trudeau’s threat to use a “backstop” power that would see Ottawa collecting a price-fixed carbon tax within a particular province if the province itself will not. Even the National Post’s estimable Andrew Coyne suggested not long ago that the Ontario PC leadership candidates’ “declaration of opposition to a carbon tax is… meaningless”: Since Ottawa will levy the tax itself if it has to, “the tax will be collected” whether they liked it or not. In reality, though, a growing number of provinces are girding for battle in what could be a federal-provincial showdown for the ages. Far from being certain of getting its way, the federal government likely lacks the weapons it needs to win. - National Post

The focus on Patrick Brown that dominated the Ontario Tories’ breakneck leadership race evaporated with the election of a new leader this week and policy became the central question. He’s still crafting a new platform, but so far he’s promising a smaller government, less spending and reduced health care wait times. The carbon tax that Brown pitched is firmly off the table, and Ford is promising to join Saskatchewan Premier Scott Moe in his fight against any federally imposed price on carbon. Ontario is already part of a cap-and-trade program with Quebec and California, but Ford has promised to get the province out, which might be easier said than done. - iPolitics

United Conservative Party Leader Jason Kenney wants to make it impossible for the current or future provincial governments to hike Alberta's carbon tax without a referendum. Kenney introduced a private member's bill Thursday which – if passed – would ensure all Albertans get to vote on any future increases in the carbon tax. "This bill, if passed into law, would give Albertans the final say on any future increases in the carbon tax," Kenney said during a news conference at the Alberta legislature. Kenney intends to scrap the carbon tax as his first action if elected premier next year. He said his bill would require future governments that wish to reintroduce tax to put the question to Alberta residents. The party is hopeful a vote will occur sometime during the current session of the legislature. Private member's bills, particularly from the opposition, rarely pass. - CBC News

Premier Rachel Notley is now tying the start of Trans Mountain pipeline expansion to future carbon tax hikes as dictated by the federal government. "Moving forward on additional hikes to the carbon levy will depend on the Trans Mountain pipeline," Notley told the Alberta legislature Thursday, in response to a question from Jason Kenney, leader of the official Opposition United Conservative Party. Alberta introduced a $20-per-tonne tax on carbon dioxide emissions on Jan. 1, 2017. That increased to $30 a tonne on Jan. 1, 2018. – CBC News

Protesters must be restrained from obstructing the expansion of the Trans Mountain pipeline, says a British Columbia Supreme Court judge who has granted the company an injunction aimed at preventing people from entering within five metres of two work sites. Justice Kenneth Affleck said Thursday he felt it necessary to make a decision on the second day of a hearing instead of issuing a written order involving outraged demonstrators who have blocked vehicles and workers at the Burnaby Terminal and the Westridge Marine Terminal. The injunction is indefinite, allowing Trans Mountain to continue work it’s legally entitled to do after the federal government approved the twinning of an existing pipeline from Edmonton to Burnaby in the belief it is in the best interest of Canada, Affleck said. Trans Mountain has said that while protests began last November, it sought an injunction after demonstrators began intensifying their blockades recently when trees were being cleared. It said construction at the sites in Burnaby, B.C., is expected to last until December 2020. - iPolitics.ca

Canada’s natural resources minister Jim Carr says that Ottawa is determined to see the Trans Mountain pipeline expanded, despite an interprovincial dispute on whether the project should go ahead. Carr said the federal government approved the project because broad consultations determined it was in the national interest and will help facilitate a transition to clean energy. This week, Alberta Premier Rachel Notley called on the federal government to do whatever it takes to get the pipeline built, as her province continues to be in a battle with British Columbia. The federal government continues to voice its support for the project and has already stepped in to intervene with the National Energy Board over construction delays, Carr said. - CBC News

A three-member scientific panel will review the safety and environmental standards of fracking for natural gas in British Columbia and give the provincial government advice on what changes might be needed to minimize its risk to the environment. Michelle Mungall, the minister of energy, mines and petroleum resources, says the panel will hear presentations and collect scientific evidence from organizations and experts. It will also consider traditional Indigenous knowledge from First Nations. Mungall says the panel will look at the impact hydraulic fracturing has on "induced seismicity and its impacts on water quantity and quality," as well as the escape of so-called fugitive methane emissions during the fracking process. Hydraulic fracturing, or fracking, for oil and gas involves pumping water, nitrogen, sand and chemical additives at high pressure to split shale rock formations. It's a process supporters say has been safely used for decades, but critics blame fracking for groundwater contamination, air pollution and increased earthquakes. - Global News

The average Holstein cow produces over 45 kg of manure a day – that’s a lot of potential power. On some farms, that energy is already being collected: The manure is tossed into an anaerobic digester system where gas concentrates and then has to be stripped of water, carbon dioxide and other elements before being mixed with traditional natural gas and used for heat. Professor David Simakov is working with colleagues at the University of Waterloo to try to boost the energy content of this raw biogas with a refining process that uses hydrogen in a chemical reaction to convert carbon dioxide into methane. Simakov’s research is still 3 to 5 years from producing renewable natural gas economically, but the eventual payoff is promising. - Telegraph Journal

Drill or buyback? Canadian producers sit back and repurchase own stock as pipelines fill up — Geoffrey Manning

Canadian oil and gas stocks are so cheap that companies are better off buying back their own shares than drilling new wells, according to money managers. Canadian Natural Resources Ltd. became the latest in a string of domestic oil companies to announce plans for a share buyback after markets closed Wednesday, when the company filed for a normal course issuer bid indicating plans to repurchase five per cent of its float. If Canadian Natural follows through with the bid, and management indicated on the last earnings call that they would, it would mark the first time that Canada’s largest producer has repurchased its own shares since the oil downturn began in 2014. - National Post

The Trump administration accused Russia on Thursday of engineering a series of cyberattacks that targeted American and European nuclear power plants and water and electric systems and could have sabotaged or shut power plants off at will. United States officials and private security firms saw the attacks as a signal by Moscow that it could disrupt the West’s critical facilities in the event of a conflict. They said the strikes accelerated in late 2015, at the same time the Russian interference in the American election was underway. The attackers had compromised some operators in North America and Europe by spring 2017, after President Trump was inaugurated. In the following months, according to a Department of Homeland Security report issued on Thursday, Russian hackers made their way to machines with access to critical control systems at power plants that were not identified. The hackers never went so far as to sabotage or shut down the computer systems that guide the operations of the plants. - New York Times

A former U.S. Treasury Secretary says he believes it’s time for companies to come clean about the financial risks they are facing from disruptions caused by climate change. Robert Rubin made the comments on Wednesday at the GLOBE Forum, an annual three-day conference hosted in Vancouver that focuses on sustainable development. “Most people have not internalized the impact of climate change," Rubin said, emphasizing the potential risks posed by climate change. These impacts, Rubin said, include the physical effects on our ecology and infrastructure, the risks that will emerge during the transition period (i.e. new regulations) and adaptation. Rubin told the audience he believes that companies that are exposed to these risks should be required to disclose them if they are material, in the same way they describe other risks, like cyber attacks. The challenge with this disclosure, he said, is putting a price on the risk. - National Observer

British billionaire Sanjeev Gupta has been given a $10-million loan from the South Australian government to help build what will become the world's most powerful storage battery near Port Augusta in the state's north. Construction of the storage battery will begin this year and when it is completed the battery will have more grunt than the one built by Tesla and French company Neoen near Jamestown, which last year was trumpeted by Elon Musk and South Australian Premier Jay Weatherill as the largest in the world. - Australian Financial Review